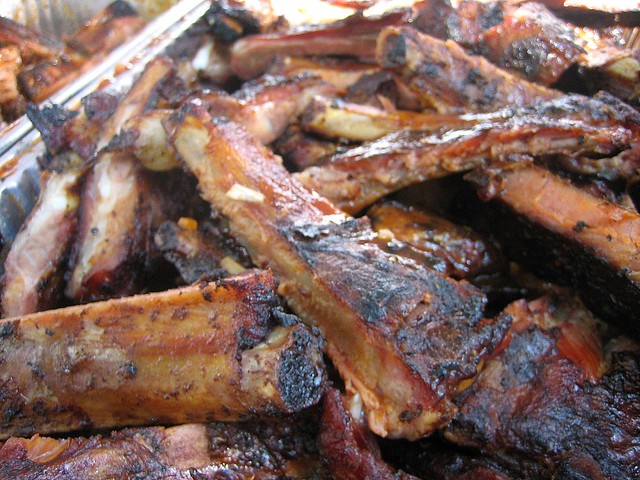 What would make this even tastier? Beeeer!

As a food enthusiast, for your Fourth of July barbecue, you’re probably not going to want to sully your Kansas City-style spareribs experience by washing them down with a Bud Light. No, you’ll want the perfect brew to complement that spicy sweet sauciness…and another beer to go with the rosemary potato salad, and one to go with that bourbon caramel apple pie.

Barbecued Meats: “Brewed with three types of rye malt, The Bruery Rugbrod brown ale that emphasizes the earthy, spicy character of the grain with hints of roasted malt, would balance the flavor of the meat and have some bitter crispness to cut the richness.” — Han

“BBQ rib depends on the style of sauce. With Hoisin-based sauce, Firestone 14 is incredible. Big, dark, and complex with ample sweetness to balance the heat. Other big beers and barleywines will pair well with bold sauces. Rauchbier or “smoked beer” is a good choice across the board for obvious reasons. The traditional one is from Aecht Schenkerla. Alaskan Smoked Porter would be wondrous with Memphis style, and for the more acidic styles based around vinegar I think a well-balanced Flanders Red might be an interesting pairing, say Rodenbach.” — Kelley

“My favorite all-around pairings with the stuff would probably be a fresh and hoppy Pilsner, a Marzen like Paulaner Oktoberfest, or a lighter dry stout.” — Macy

“I always love a smoked black lager with BBQ. L-O-V-E! Craftsman makes a great one and the black lager style is really catching on.” — Perozzi

Potato Salad: “Eagle Rock Brewery Revolution (XPA) is a hoppy pale ale that would bring some crisp, refreshing hoppiness to the starchy, sweetness of a potato salad.” — Han

“If it’s one with dill, I’ve found that to conflict with hops, but I usually like something malty but pretty light. You could do one of the amber lagers, or something like a cream ale (the American style, not the Irish or British beer that is often confused to be cream ale). On that note, for a really great cream ale, try the one from Taps.” — Macy

“I love to pair a nice herbaceous IPA with hints of rosemary and grass…plus the dryness in the hops really works with the creaminess of a mayo-based potato salad.” — Perozzi

Apple Pie: “Craftsman Triple White Sage with a bright aromatic and 9% ABV would complement the sweet apple pie and crust to bring a unique characteristic of sweet and herby.” — Han

“Ephemere from Unibroue. They use Granny Smiths in that beer, it’s super fruity but highly carbonated, and fairly dry.” — Kelley

“If you’re putting vanilla ice cream on top, my favorite is something like Thomas Hardy’s ale, Gouden Carolus Grand Cru of the emperor, or even something dark like an imperial stout! And if you want to go really intense, it could probably even work with Alesmith Speedway Stout (it might overpower, but it could also be the perfect analog to having coffee with your pie).” — Macy

“There’s no other beer I’d pair with the apple pie than the Ephemere Pomme from Unibroue…. unless I went with Allagash Curieux aged in Bourbon barrels. Forget about it.” — Perozzi