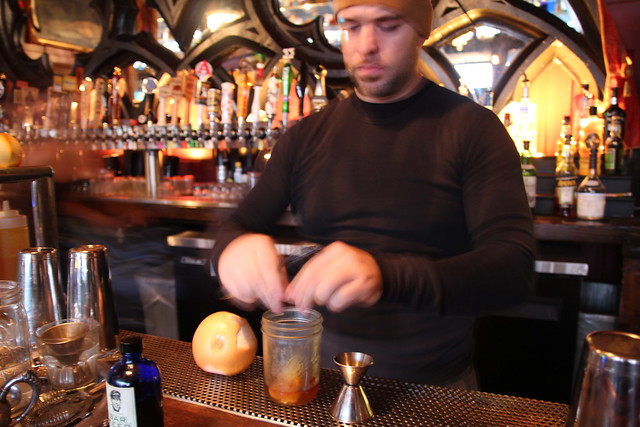 Bartender Dave Whitton of Villains Tavern and the Bar at Cliff’s Edge gave me what is perhaps one of the greatest birthday presents I’ve ever gotten. Ever. He created a cocktail to be served at my upcoming birthday party at Cliff’s Edge. But not only that, he came up with three different cocktails for me to choose from to be that special “Caroline’s Cliffhanger.”

Now, I trusted Dave with creating a namesake cocktail because I’ve liked what he’s done at Villains, the downtown bar he co-owns and designed the cocktails for, and his naughty twist on the classics at Cliff’s Edge. His drinks are fun for cocktail geeks and yet approachable for newbies. Also, he’s well aware of my bourbon fetish and that Manhattans are my go-to cocktails.

His concern, though, was that since we would be serving this cocktail to a group of people that maybe half of them would be put off by something as potent as a Manhattan. So he presented me with a mainstream cocktail, a cross between mainstream and cocktail geek, and a cocktail geeky classic.

Here are the contestants. 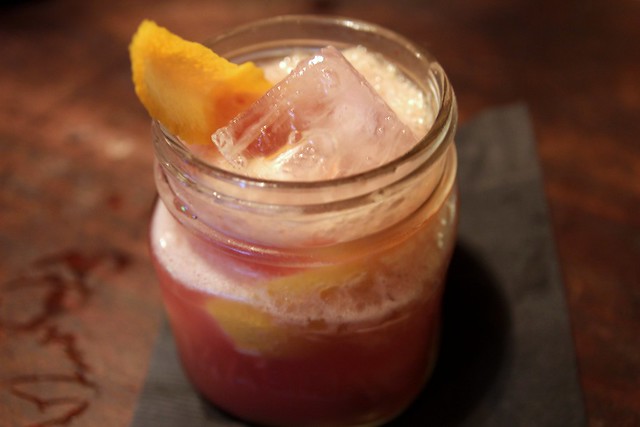 This cocktail was served on the rocks in a mason jar and Dave described it as a summer cocktail.

Dave: “It’s got orange oils on top which are bouncing off the peach syrup and the Lillet, the dark Lillet which gives a port wine body to it. So the Makers you get that soft bourbon flavor that’s going to blend with anything that’s dark and fruity. The peach syrup which combines with the Lillet and lavender. That’s definitely more mainstream. More along the lines of where most people are going to go, ‘OK, I can have another one.’ The other one [cocktail #3] is more of a classic style and going to be more for the cocktail drinker. ”

Cocktail #2: A 46 Sour, a take on a New York Sour with Maker’s 46, fresh lemon, egg whites, topped off with an herbal Cabernet. 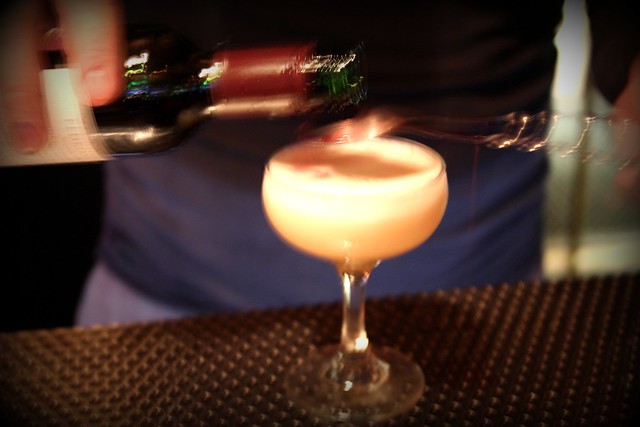 Dave suggested this cocktail since Cliff’s Edge is known for its wine and the recipe includes Cabernet. The Maker’s 46 gave the concoction a nice spiciness. 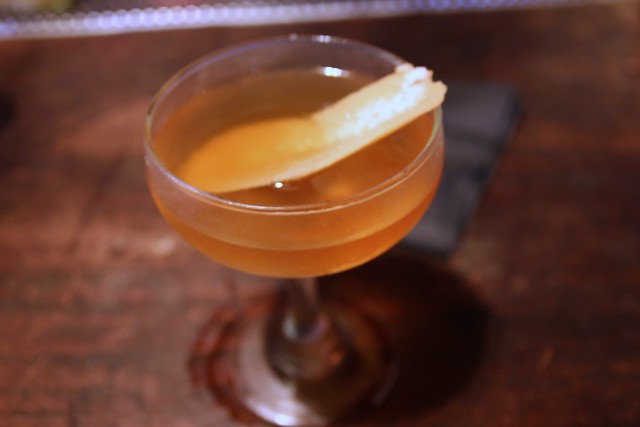 Dave: “This is a cocktail that I think you would like but not necessarily the direction for an entire group of people.”

Dave created this one for the person who wouldn’t normally go for something straight. “I was still trying to go for something mainstream enough where even with straight liquor you can handle it and be like ‘I don’t know I can’t do it’ and then you taste it and go ‘Oh, it’s not that bad.’ Now of course if you didn’t like bourbon at all you’d be like ‘Ohh my gawwd!'”

So guess which one I picked? Hit the jump for the answer and recipe. 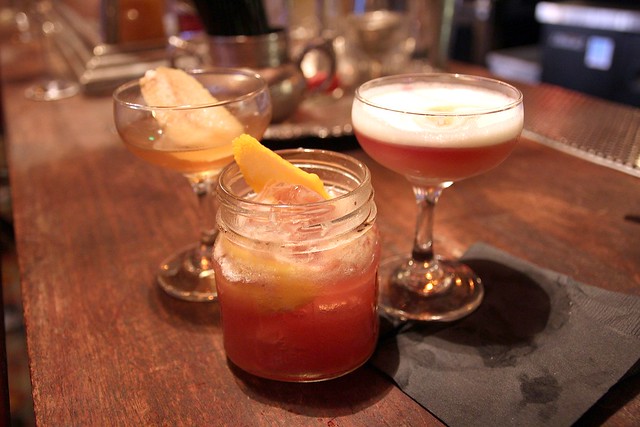 Caroline cocktails, which is the tastiest of them all?

Yup, Cocktail #3. Initially I feared that the St. Germain and honey syrup would render it too sweet, a cocktail buzzkill for me, but instead they softened the bite of the bourbon. The subtle use of lemon and grapefruit oils combined with the elderflower liqueur and honey also made the cocktail very approachable on the nose so non-Manhattan drinkers won’t be scared away from it. Dude, I could just sit there and inhale the fragrance of this cocktail for hours.  I also liked how Dave introduced the citrus factor to this cocktail, via oils. That way you get the citrus…without the astringent taste.

Cocktail #1 was Dave’s mainstream effort. I found it way too citrusy. My bf, who was also present to offer an opinion, liked the cocktail but said he didn’t like it for me. I just didn’t like the fact that the citrus and the ice (I usually don’t like drinks on the rocks) effectively hid the Maker’s.

Cocktail #2 was the runner-up. Really flavorful and spicy and the egg white foam was fun but it would be too easy for me to put several cocktail glasses of this away (#3 is a sipper for sure). Dave said we could serve this as a backup cocktail. Yay!

Now I just need someone to name a town after me and I’m all set.

Here’s the recipe for Caroline’s Cliffhanger for you to try out at home.

PS: Sorry for all the blurry photos! I’m still trying to get the hang of my new camera. Argh!