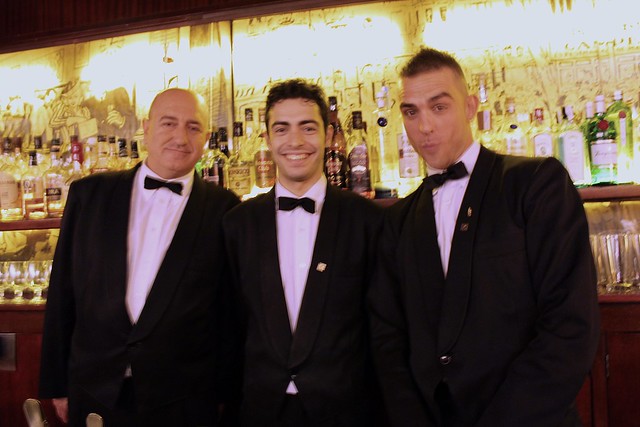 These sharply dressed bartenders at Boadas give our LA ones a run for their money.

I’ve always had a thing for Ernest Hemingway. A real man’s man. Think George Clooney but with bullfighting and daiquiris. That man could drink and I respect that. Fortunately it turned out that my long-range European bar hop became an impromptu “Hemingway Drank Here” bar tour. It was born out of wanting to check out Hemingway’s at the Ritz, home of $40 cocktails. But instead it was Harry’s New York Bar in Paris and in Barcelona it was El Raval’s historic bars, Marsella and Boadas. Both were within stumbling distance of my flat right off La Rambla. 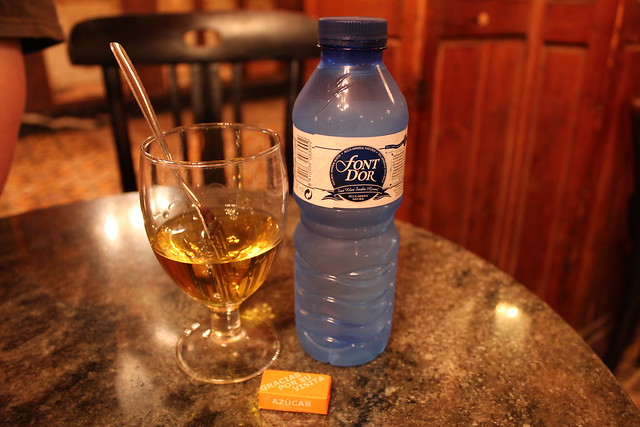 How Marsella does absinthe.

Marsella’s claim to fame is that it was where absinthe was introduced to Barcelona back in 1820. Famous artists and writers like Salvador Dali, Pablo Picasso and Papa Hemingway himself got loopy on the green stuff back in their day. If you didn’t know the bar’s history, it would be easy to overlook this unassuming drinking hole, what with its unremarkable exterior, save for the few prostitutes hanging just outside its doors.

Its interior holds the appeal of an ancient painted lady with years of too much smoking, boozing and hard living. If you look long enough you could probably still see the beauty beneath all those years. Thick layers of dust coat the chandeliers as well as the shelves and shelves of old liquor bottles, the walls and ceilings yellowed by centuries of tobacco smoke. The floor is covered with charmingly mismatched tiles. And there are lots of open space with chairs and tables clustered along the walls. Maybe to make way for drunken dancing later?

When you walk up to the small bar, you see an unimpressive collection of liquor — Jack, J&B, Malibu Rum. If you have no grasp of Catalan and with no cocktail menu to point to, you would be tempted to turn around and go back out the door. 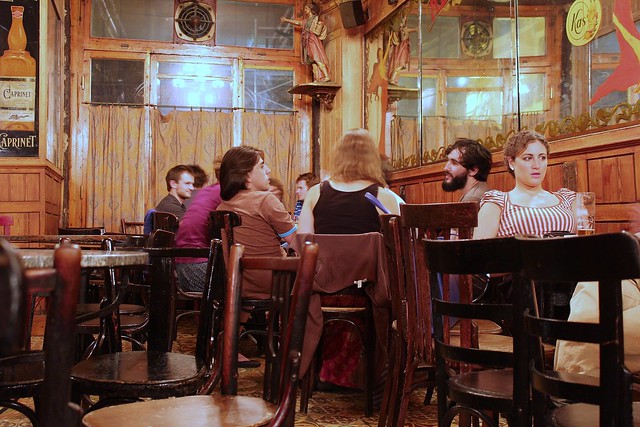 Just the start of the evening.

But those who know the bar’s claim to fame can simply utter “absinthe” and then be presented a glass of pre-poured absinthe, one of many glasses sitting on the shelf behind the bar. “For how long?” one can’t help but wonder.

The bartender will also hand you a wrapped sugar cube, a small, chilled bottle of water and a tiny fork, with no instructions. But drinkers of absinthe will already know what to do.

We gathered our DIY cocktail fixings and grabbed one of the many empty tables next to a trio of drunk 20-something frat boys and set to work. 1) Rest the sugar cube on the fork over the glass, 2) drip the cold water oh so slowly over the sugar cube until it is completely dissolved. Now, I’m not an absinthe connoisseur so don’t know how this compares to most absinthe brands (apparently Marsella has its own brand) but I suspect for most who stop by this old bar, it’s more for the anecdote than the taste.

Unfortunately since we went early (around 10pm) the place was still emptyish, save for the American boys who didn’t stay long and the growing group of raucous friends taking up most of the tables in the corner. It wasn’t til 11 or so that the place started filling up and an actual queue began forming out front.

Those seeking a non-touristy Barcelona drinking experience, far from the crowds of La Rambla, would do well to stop by Marsella. It’s a dive bar with a lot of history and not the place for those seeking something beyond a cocktail of liquor and a mixer, but use it as many do as a jumping point for your evening. Marsella closes at 2:30am Monday through Thursday and at 3am on weekends but the clubs in the city close at 6am.

At Boadas, they pour all the way to the rim, to the point of nearly spilling.

Barcelona’s Boadas, on the other hand, was an instant favorite for me. Its founder Miguel Boadas was the head barman at Hemingway’s favorite bar in Cuba, El Floridita, and opened up this classic cocktail-focused watering hole in 1933. His daughter Dolores Boadas now runs the place. They don’t have a cocktail menu either, only offering one specialty cocktail of the day (aka “Cocktail Del Dia”), and a repertoire of classic cocktails.

Because of its El Floridita roots, you’d do well to order a daiquiri or mojito but when I had told the smartly dressed bartender I preferred whiskey drinks, in particular the Manhattan, he insisted on making me a Whiskey Cooler with bourbon, ginger ale and soda. It was disappointingly too watered down for my tastes but it was entertaining watching him make it with his flourishes and sleight of hand.

After my boyfriend was pooh-poohed for requesting a Sazerac because it contained absinthe, which they don’t stock, they fixed him up an Old Fashioned. The chunkiest Old Fashioned I’ve ever seen. The bartender started by muddling maraschino cherries, then added “a shit ton of liquor” (my bf’s words) and filled it with orange slices and peels. Hmm, they do things differently here. The cocktail was potent, drinkable and fortunately not too sugary. 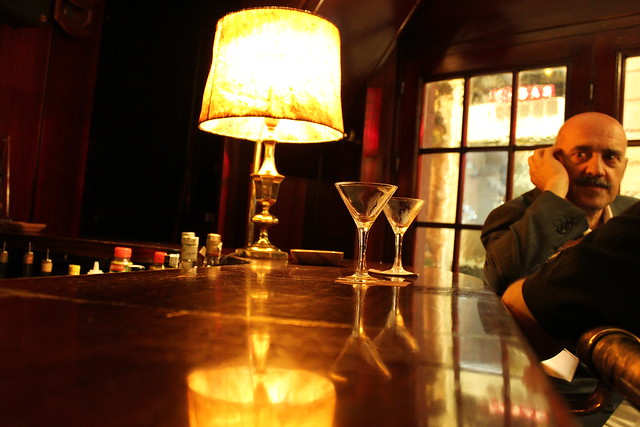 It was fun to watch them mix up the Manhattan, with the bartender mixing the cocktail by transferring the liquid from one tin to the other with a high pour. Cocktail acrobatics. The drink itself was decent. You couldn’t really taste the Maker’s but you caught the vermouth midpalate and the bitters on the finish.

No mind-blowing cocktails at Boadas but loads of atmosphere. This bar is cozier, more intimate than Marsella with only bar stool seating. (The door to the bathroom can be found in the far back corner, almost like a secret entrance.) Since it’s located just off bustling La Rambla, a dress code is enforced as a way to keep at bay flipflop-wearing tourists, who should be showing some respect for the historic cocktail establishment anyway.

Just show up in a nice dress or buttoned shirt and sidle up to the bar. Anywhere in front of a bartender will be the best seat in the house since you can watch them mix those cocktails with flourish as well as enjoy their banter. The night we went, while sitting at the bar, a group of older Brits came in through the doors and one bartender leaned over to the other one and said “Heineken” behind his hand. Sure enough one of the tourists asked the bartender if they served anything other than cocktails. And when the bartender responded with “Just classic cocktails” the Brits left. I couldn’t help but wonder what they had guessed for us when we walked in.