Recap: Spare Room Bowling and Taste of the Nation LA 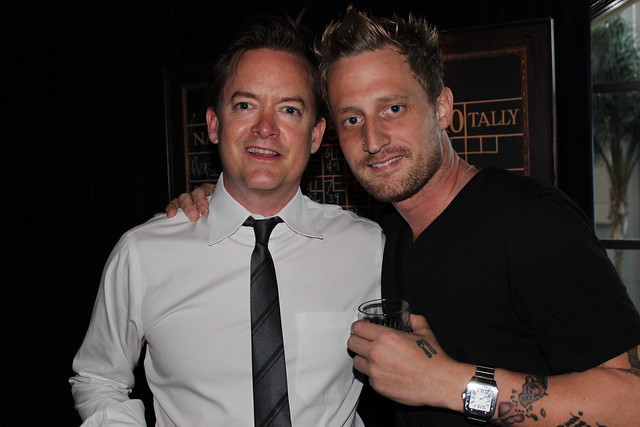 Last week’s Spare Room bowling party for Taste of the Nation LA marked the last pre-TOTNLA event before the big one on June 12. Hosted by me and organized by cocktail ringmaster Aidan Demarest, it was a smashing success. At least that’s what they tell me. I just remember a whirlwind of friends and cocktails. So funnn!

Spare Room bartender Naomi Schimek kept the cocktail punch bowls flowing, which were a hit as everyone helped themselves to the Old One, Two punch and Late Checkout (my personal favorites) as well as the conga line of appetizers coming in from Public Kitchen and Bar. With a maxed capacity cocktail lounge/fancy bowling alley we were able to raise $400 at the door and an additional $550 from donations to Share Our Strength’s TOTN Web site, to help end childhood hunger!

Connect Four competitors locked black and white chips for the grand prize of TOTNLA tickets while bowlers, including celebrity chef Michael Voltaggio (Ink) and local foodie favorite Jo of My Last Bite, slugged it out on the bar’s shiny lanes. There was an entertaining battle between Voltaggio and red-headed bowling hustler, Alie Ward of Food2’s Alie & Georgia. But in the end, dark horse contender Janice decimated the competition and won the grand grand prize of a night’s stay at the Hollywood Roosevelt as well as tickets to TOTNLA.

What’s Going Down at Taste of the Nation

Just wanted to thank all my friends who came out to support this event and Taste of the Nation, whose June 12th food fest, compared to last year where it was all wine, happens to also have a killer cocktail and beer lineup!

Providing the nosh will include the likes of A-Frame, Comme Ca, craft, FIG Restaurant, Lukshon, Mo-Chica, Playa and The Bazaar by Jose Andres, to name but a few.

Also Red O by Rick Bayless will be there. Hmm, Bill Esparza of Street Gourmet and his bossa nova trio Cachaça Nova will be there as well, providing the day’s soundtrack. These two haven’t gotten along in the past. Is this where they will kiss and make up?

It all goes down June 12 from 1-4pm at Media Park in Culver City. Tickets are $100 for adults ($125 at the door). Sorry, VIP is sold out! Buy tickets to the event here and help end childhood hunger.