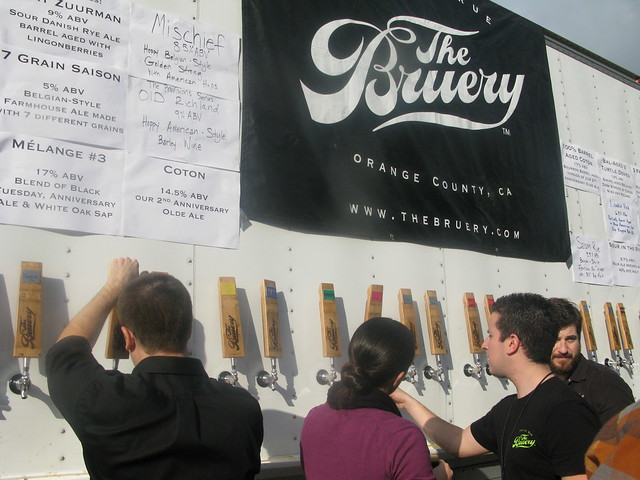 The Bruery, one of my favorite SoCal breweries, is celebrating its 3rd anniversary. That means it’s been spreading joy and happiness through its tasty brews for only three years. And, this Placentia-based beermaker is going to do up its celebration BIG by combining it with a local craft beer festival. So not only will you get a chance to taste Bruery favorites like Rugbrod and Orchard White, but brews from Black Market Brewing Company, Craftsman, Firestone Walker and Ladyface Ale Companie!

The event takes place at The Phoenix Club in Anaheim and will have food available for purchase as well as cheese and snack stations by The Bruery Provisions.

Tickets: You can either do general admission for $35, which gets you a souvenir glass and 10 4-ounce tasters (additional tasting tickets are $1) or do it up like a balla and get the VIP tickets for $50, which gives you access to the Rare Bruery Beer section and six tastings. Take your pick of rarities like 100% Barrel Aged Cuir, Melange #1, Melange #3, Bottleworks XII, The Wanderer, Black Tuesday (!), Chocolate Rain (!!), Marrón Acidifié, ISO:FT, Oude Tart, Acer Quercus, Pinotlambicus, Barrel Fermented Autumn Maple.

I went to the Bruery’s Reserve Initiation Party earlier this year at the Phoenix Club and even though it was packed it was funnn. Made lots of new friends and drank a lot of awesome beer. So I’ve no doubt this is going to be a blast considering there are even more breweries involved.

Just remember to bring a designated driver; it’s only $5 admission for the DD!

And now the giveaway portion of the program!

GIVEAWAY: I?m giving away a pair of VIP tickets ($100 value) to this beerific event. To enter to win, do the following. You must do all steps for it to be a valid entry, m’kay?

I?ll randomly pick a winner via Random.org on Friday at noon and notify the winner via email. If I don?t hear from you by 2pm that Friday, I?ll draw another winner so check your email!