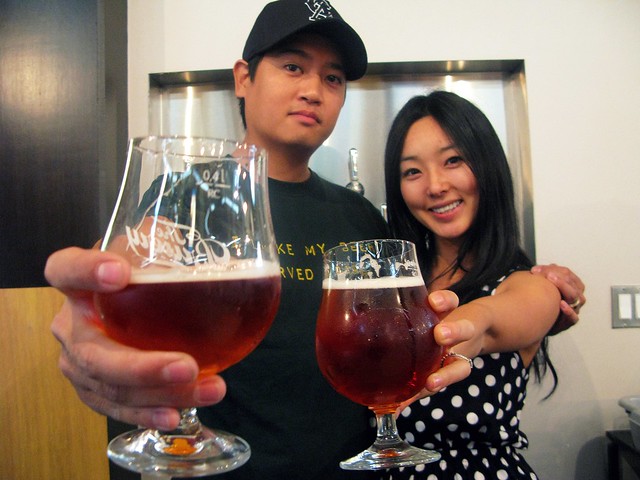 Beer Belly craft beer bar is opening in Koreatown this Friday, and it seems to possess all the elements of what make a beer bar great: 1) an impressive selection of affordably priced, handcrafted beer on taps; 2) tasty bar bites; 3) beer-serious owners; 4) knowledgeable beertenders; and 5) parking. 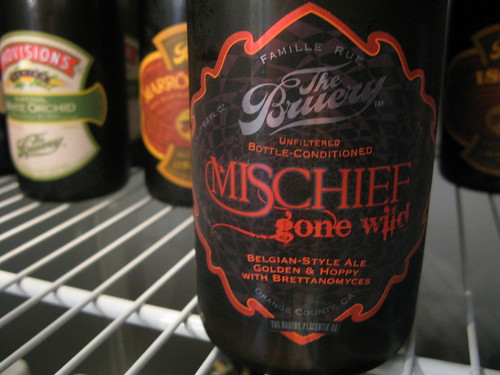 The owners, Jimmy and Yume Han, are so young, attractive and hip, I wondered what their intentions were for opening up such a place. But after interviewing them for LA Weekly’s Squid Ink, getting past their sound byte tendencies and learning of their passion for craft beer as well as checking out their new digs, I see that they’re really serious about it all. They may be fairly new to the beer world but they’re eager to learn, open to suggestions and always willing to try something new.

And the beer community has embraced them, garnering them advice from the best in the business, like Ryan Sweeney of the Surly Goat and Verdugo Bar, Mark Craftsman of Craftsman Brewing Company and of course the Beer Chick herself, Christina Perozzi, who had not only trained Beer Belly’s staff of beertenders but helped the Hans curate their tap selection. Although according to her, they already had a good grasp of beer and “get it.”

During my sneak peek visit last week, I got to check out what they’re planning to have on tap for their grand opening night this Friday: beauties like The Bruery’s Rugbrod and Craftsman Cabernale. At the time there was also Black Market Brown Ale, one of my new favorites, but Jimmy said he might have to switch it up since he’s been drinking that and the Eagle Rock Populist IPA while setting up the bar. Who could blame him? But I do really hope it’s still there for the opening. 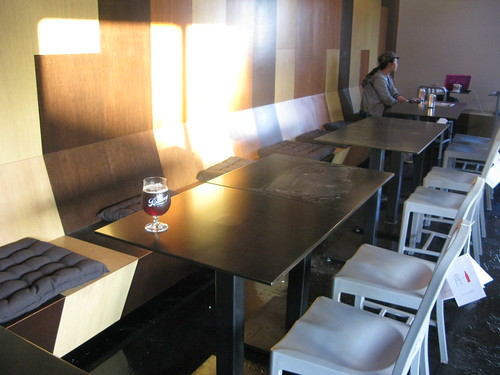 There will be a rotating list of beers on 12 taps which Jimmy promises will be recession-friendly, “nothing over $10.” And in the fridge is a selection of bottled beer like Rogue Chocolate Stout, Dogfish Head’s Miles Davis’ Bitches Brew as well as picks from Jimmy’s own private stash, a collection he’s amassed over the years with rarities like The Bruery’s Mischief Gone Wild.

For non drinkers who tag along with their beer-drinking friends, there is also a nice selection of artisanal sodas like Blenheim Ginger Ale (yay!) and Waialua Mango Soda. And a couple bottles of wine for those into that.

Naturally there will also be food, but a small and simple selection of shareable dishes. The night I went they had specially made boar bratwurst by Grindhaus Sausage Truck served with highly addictive onion stout jam that I wanted to use on EVERYthing. There was also asparagus, French fries with potato aioli featuring bacon fat and roasted beets and tofu salad with Asian pear and honey sesame vinaigrette. There was talk about meatball skewers but unfortunately they were not yet available. 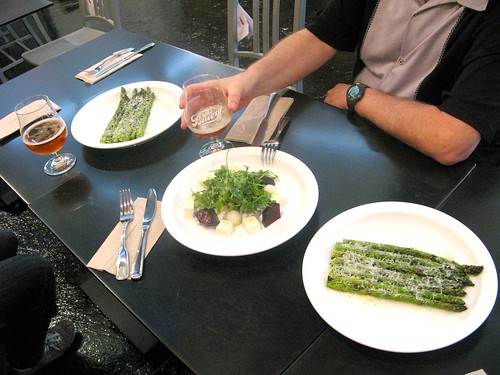 The bar is actually set up looking more like a restaurant than a beer bar. There aren’t bar stools at the bar or high tops, mayhaps due to license restrictions, but there is a drink rail. And seating is restaurant style with table seating at a bench along the wall and a couple of tables by the front, floor-to-ceiling window. It’ll seat 35 comfortably but 50 folks can squeeze in.

The space, designed by MAKE Architecture (who did Bodega Wine Bar), is beautiful and modern what with three different stains of mahogany on the walls and even ceilings, a very shiny concrete floor. Outside, striking street art by MR44 wraps around the exterior.

Beer Belly definitely stands out in this area of Korean barbecue joints, mom and pop shops and karaoke studios. A good thing considering it’s located off the street, tucked in away off the main drag. Hopefully, since it’s in walking distance of the Wiltern, possesses its own parking lot and offers a such a well-done beer list, it’ll be a destination for beer connoisseurs. Add to that that Biergarten, home of the Glutster burger and a decent beer selection of its own, is just up the street (less than a mile away) and you’ve got yourself a nice little beer bar crawl.

More photos of Beer Belly after the jump.