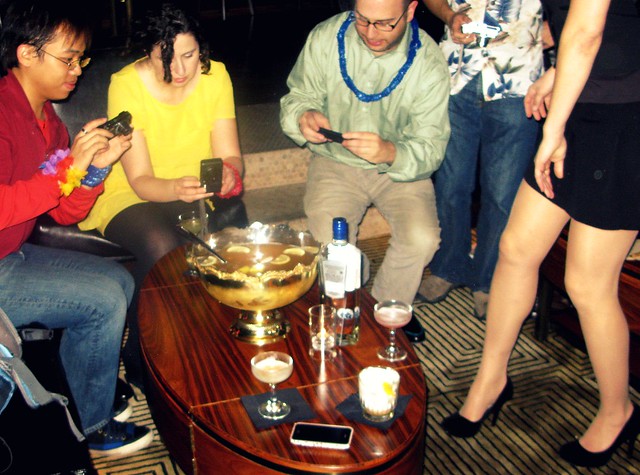 Punch is the new bottle service.

If you’ve shied away from Hollywood nightlife before because clubbing isn’t your thing, The Spare Room, cocktail bar/bowling alley, at the Hollywood Roosevelt might just be able to entice you over to the blingy side. Yes, they have bowling at what is surely the fanciest alley you’ve ever seen, and that includes Lucky Strikes. Meant to evoke bowling in a billionaire’s living room, there are only two very shiny lanes.

Cost is $100 an hour to rent with up to six players, with the George Esquivel shoe rental included. AND should you forget your socks or want to don something fancy enough to slip the Esquivels onto, the SR actually sells fancy foot coverings in argyle, striped or pom poms at $10 a pair! Pom poms!

But if you’re not the “athletic” type, in the lounge adjacent to the bowling alley, you can take your pick of a variety of board games, a selection that rivals that of a seniors-only cruise. What’s it going to be Scrabble, Connect Four, Battleships or the classics like dominoes, chess or cards? There is no charge to play board games, but you’ll have to leave your credit card at the bar for insurance. For example a lost tile from the Scrabble board will cost you $50. And yes, they count them when you turn the game in.

And Aidan Demarest, SR manager, said that there’s no real time limit for board games. Apparently there’s a couple who comes by every Wednesday who order a cocktail punch bowl and sit and play Scrabble all night. “I don’t even know if they really drink the punch but that’s what they like to do,” he said. Sounds like a lovely way to spend a chill evening! Caution: Aidan’s been known to jump in a game or two, so look out, he’s a skilled Scrabble player and reads the Scrabble dictionary for fun.

As for the punches, of which there are currently seven varieties, you can order them in three sizes: $60 for four to six people, $120 for eight to 10 and $240 for 16 to 20. Aidan said the most popular cocktail punch is Take Fountain, a concoction of Belvedere vodka, Fino Sherry, jasmine green tea, elderflower liqueur, sugar, lemon and orange essence. “It’s like a creamsicle,” Aidan said. However the cocktail-serious usually opt for the spice-intensive Moroccan Bazaar made with Batavia Arrack, 10 Cane Rum, black tea, sugar, lemon, cardamom and nutmeg. 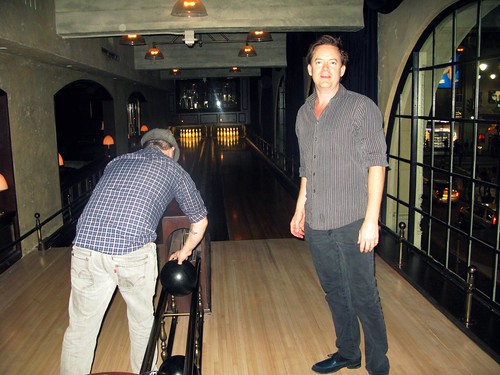 Cocktail punches, originally the drink of British sailors back in the day, have become an economical way for a group of friends to imbibe, provided they can all decide on the same cocktail. “It’s the new bottle service,” Aidan said. But figure that if you ordered the $60 punch bowl for six of your friends it would be only about $10 a person. A regular cocktail at Spare Room costs $14. Split the bowl with a friend and you’ve got the added convenience of not having to get up every time you run out of drink. Just keep in mind that there is a 20 percent service charge, too.

Plus, cocktail punches are created for leisure drinking, with flavors marinating the longer the punch sits. Aidan said that he usually prebatches the punches because it gives them time for the ingredients to intensify. When they’re made to order, they haven’t reached their full potential of awesomeness. My words.

In any case, if you would rather not share your drink, there is a slew of cocktails created by Aidan and his Spare Room bartenders. (Aside: Shout out to bartender Naomi Schimek who is awesome.)

But the Figgy Smalls with its bacon-infused Bulleit Bourbon, fig jam, egg white, lemon, bitters, thyme essence will always hold a special place in my heart,? from the Great Blogger Barhop of 2011.

By the way, heads-up, I’m working with Aidan on a Bowlers and Gamers benefit night for Taste of the Nation at the Spare Room. We’re talking all of the above and more for a great cause. It’s going to be on May 26th so save the date and stay tune for more details!