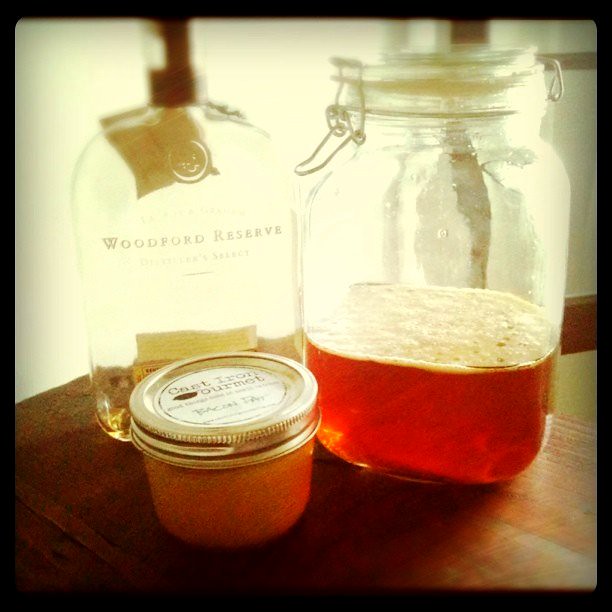 When I stopped by Cast Iron Gourmet‘s booth at Artisanal LA’s spring show, I saw that owner Rashida Purifoy was selling jars of bacon fat. “But why?” I asked her. Why? Apparently her bacon fat is awesome. Thanks to her gourmet bacon, her customers were asking for her leftover bacon fat. Yup. They wanted to use it to make scrambled eggs, in their baked goods, etc. But it was Rashida’s own use of the fat that got my attention: bacon-infused bourbon!

Yes, this may be so 2000-and-late to the cocktail world but I don’t care. I’ve been wanting to make my own bottle of that good stuff since I first heard the New York bars were doing it but since I don’t fry my own bacon, I never got around to it. So this jar of bacon fat was a blessing. Half the work was already done! Plus it’s triple filtered so it’s clean from bacon bits.

And Rashida not only gave me her recipe on how to infuse my own bacon bourbon but a cocktail recipe for something she calls “Breakfast.” It’s similar to this bacon-infused vodka cocktail which is also called “Breakfast” but seems like bourbon would be a better way to go, no? Especially when mixed with maple syrup. Rashida isn’t a trained mixologist but I can still get with what she’s doing.

By the way, there’s also this recipe which involves bourbon and a bacon-infused St. Germain and the Bacon Old Fashioned from PDT. Hmm, so many options! Anyway here are the directions for infusion:

To infuse the bourbon, just pour your bourbon into a mason jar or some type of jar with a lid. Pour in 2 – 3 ounces of bacon fat. Place jar in fridge for 2 – 3 days. On the 4th day put the jar in the freezer to solidify all of the fats. On the 5th day filter the bacon fat through a coffee filter 2 – 3 times to remove all of the fat. Boom, time to make the cocktail.

Combine ingredients in a shaker over ice and shake vigorously.