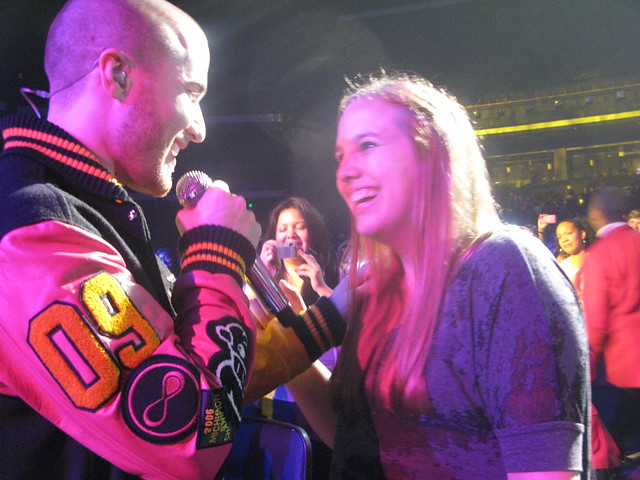 25 years ago, this was my dream. Except that guy would have been Duran Duran's John Taylor.

For this year’s fun run, Nike decided to try something different. Leaving behind its Run Hit Wonder and Human Race formats, it went with a digital race, She Runs LA, where runners could run whenever and wherever they wanted within a 24-hour period by logging their miles via Nike’s GPS gadgets and uploading their runs onto the Nike Running site. Pretty neato and futuristic idea. But that meant no actual finish line, no bananas and freebie juices and no finish line photos of sweaty, puffy but accomplished runners. 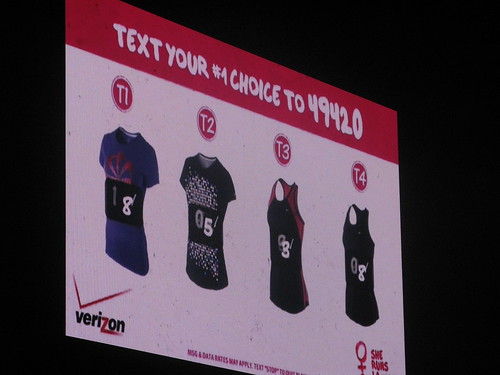 Lots and lots of Nike commercials during the event.

So Nike organized a celebration at Nokia Theatre in downtown LA where after their digital 10Ks all She Runs LA participants were invited to celebrate with Bliss spa mini treatments, the Pop Chips Photo Booth, Paul Mitchell hair styling and a concert by?someone named Mike Posner.

Yes, I have no idea who this Mike Posner guy is, and even after sitting with thousands of screaming girls who were calling his name, and Wikipedia-ing him on my iPhone, during the concert. I still don’t. At least I don’t know him like those girls do. They LOVE him. OMG, do they love him. Being “media,” my friend Shelley (@fauxlahipster) and I were given tickets to the very front row, much to the chagrin of squatters who were hoping we wouldn’t show up and were very depressed when the usher kicked them out. Sorry, girls!

During the course of the concert, Shelley and I realized we should have just let those girls have our seats. We clearly didn’t appreciate Posner as much as the 20-somethings(?) did. “I feel like we’re moms taking their kids to a concert,” Shelley said. Indeed. But I tried to remember what it felt like to be a screaming teenybopper. People still use that term, right? During the Duran Duran and Depeche Mode concerts I attended, I was probably screaming my head off, too, and singing along to every song. And I would have DIED if John Taylor or Alan Wilder had come up to me during the concert like Posner did to a girl sitting behind us. 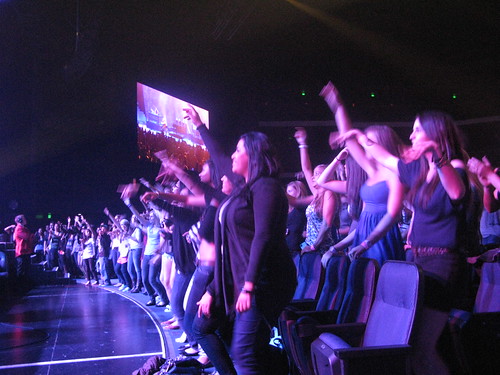 And the girls go wild.

Yup, he skipped our row of seated fuddy-duddies and walked over to her. Not that I’m complaining. The girl, Kelsey, was stunned and smiling shyly while her friends were screaming, “Ohmygodohmygodohmygod!”

As Posner sang while looking deeply into her eyes, I snapped some photos. After he returned to the stage and Kelsey was still in shock I shared with her the photo I took.

I figured if I were in her position I would have wanted that brush with an idol documented. “Oh my god! None of us even thought to take pictures while that was happening!” one of her friends said. I just wished that I had thought to use the flash or something since the photo is kind of blurry.

Anyway, that made the concert for me.  Since I couldn’t really enjoy the music, it was nice to be able to relate to the concert-goers from the perspective of a former teenybopper.

After the Nokia event, I was unsatisfied, though. Maybe it’s because I’m not a 20-something girl anymore. The college students and Students Run LA participants were over the moon about the end-of-run celebration, I’m sure. They got their pop concert and freebie Paul Mitchell hair treatments, Coca Colas, and goody bags. But sporting a ringing in my ears and a throbbing headache from sitting in front of concert speakers for a couple of hours,  I was left wishing Nike had just given us medals and bananas at an actual finish line. Oh well, at least I can now say, “I was THIS close to Mike Posner.”

More photos of Nike event after the jump.