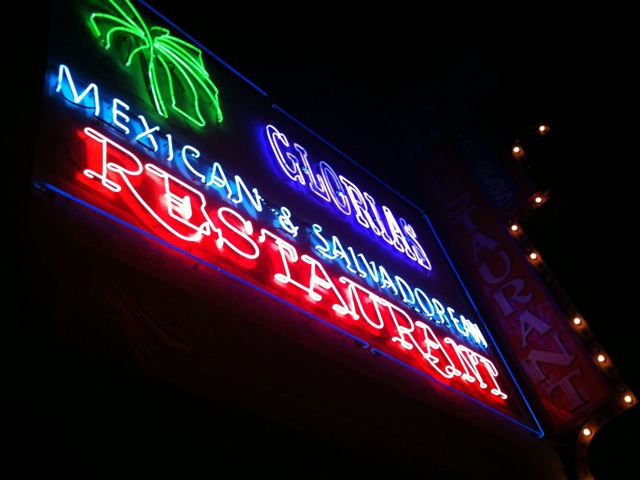 Sorry I don't have a picture of the Carne Adobada. Ate it too fast.

Last night, I swung by Scoops Westside to see if my ol’ buddy, owner Matt Kang, wanted anything to eat. Sometimes he doesn’t get a chance to get out and fetch dinner, especially when there’s a crowd of foodies clamoring for brown bread ice cream. Anyway, we decided on Gloria’s Café, an authentic Mexican/Salvadoran food restaurant that’s huge on Yelp and has appeared on Food Network’s show Guy’s Diners, Drive-ins and Dives.

It’s nearby Scoops and I usually go for the Salvadoran special with a pupusa, tamal de elote, beans and rice. However, Matt wanted to get a couple of things to split so we decided on the Chuletas de Puerco — pork chops served in garlic sauce or with grilled onions. But when I called to order the food for pickup the nice man on the phone informed me that they didn’t carry that item anymore.*

Apparently it wasn’t a huge seller — maybe because Cuban restaurant Versailles, which has the same dish, is located just next door — and because of that they didn’t want to keep it around for fear that the pork chops would get freezer burns from sitting around too long.

After that explanation I asked for what his most popular item on the menu is. “Carne Adobada,” he replied. The menu described the dish as “tender chunks of carnitas served in Ms. Gloria’s masterly prepared Adobada sauce.” Sold!

When I got the carton of food back to Scoops Westside, its sauciness had it spilling into the refried beans section during transport but whatevs, just as good together. Damn, I’m drooling just remembering it. The pork was sooo tender and juicy and the Adobada sauce with bits of onions was so savory with some spiciness. And even though I usually don’t like tomato sauce, I couldn’t get enough of this one, using it as gravy on my rice while Matt used the corn tortillas to sop it up. As we both ate, we kept murmuring, “This is sooo good, soo good!”

Even 15 minutes later after scraping up the last spoonful, I was still saying it. “Maaan, that was SO good!” It took a cup of black coffee and some Salted Caramel ice cream to finally get me to shut up about it. But I’ve definitely found my new default dish at Gloria’s. So. Good.

Oh! And side note: Their sangria is not only awesome but it’s only $4.50 a glass! A must-have.