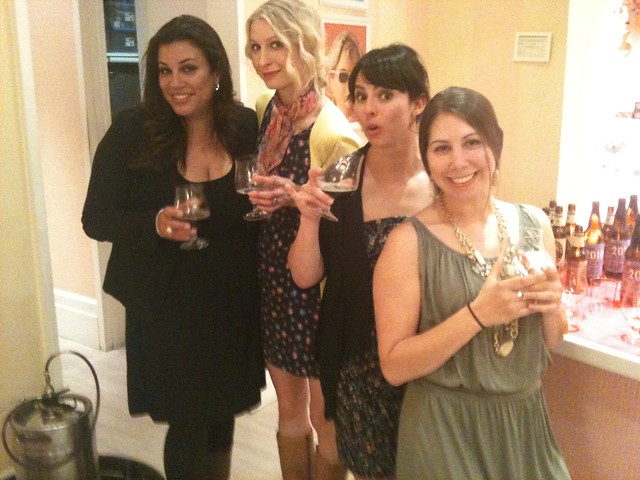 Guess what? Women enjoy drinking great beers! Last week Deschutes Brewery from Bend, Oregon, teamed up with the Beer Chicks Christina Perozzi and Halle Beaune to throw an intimate beer and beauty party for local women bloggers as part of the brewery’s Base Camp Week promotion. Food, lifestyle and drink bloggers were lured to the Benefit store in Santa Monica with the promise of beer cupcakes, beauty treatments, goody bags and Deschutes beer, which included the limited Jubel 2010.

Perozzi wanted to introduce dark beers like the Jubel 2010 and Black Butte Porter to women to clear up misconceptions that specifically American women have about it, thinking that they’re heavy and bitter. “[They] don’t get that dark beers can be very light, crisp and clean. Like this Black Butte Porter is so balanced,” said Perozzi.

As for the Jubel 2010, it’s the “super” once-in-decade version of Deschutes winter seasonal Jubelale. “It’s a much more concentrated, bigger, stronger version of Jubelale. Usually it’s just on tap but this is the second year ever and the first time in a decade that it’s been in bottles so you can get it at specialty stores.” The Super Jubel was aged in Pinot Noir barrels for 13 months and tastes of chocolate and toffee, pairing perfectly with the moist and delicious Hotcakes Bakes Black Butte Porter cupcakes served at the party.

In addition to the beer and cupcakes, party goers indulged in brow tinting, lash tinting and makeup application by the Benefit makeup artists. Even Deschutes’ only female brewer Veronica Vega was on hand to join in on the fun by getting her makeup done.

So was a beauty, beer and cupcake party an effective way to introduce beer to women? Definitely better than Coors’ “And Twins” campaign. “I wanted to help [Deschutes] reach out to a different crowd because beer brewers go, ‘This is how you do it. You go to the sports bars, get a couple of boobie girls bouncing around,” Perozzi said. “If you were an intelligent, modern woman would you want to be associated with those kinds of images?”

More photos of Deschutes Beauty Night after the jump…