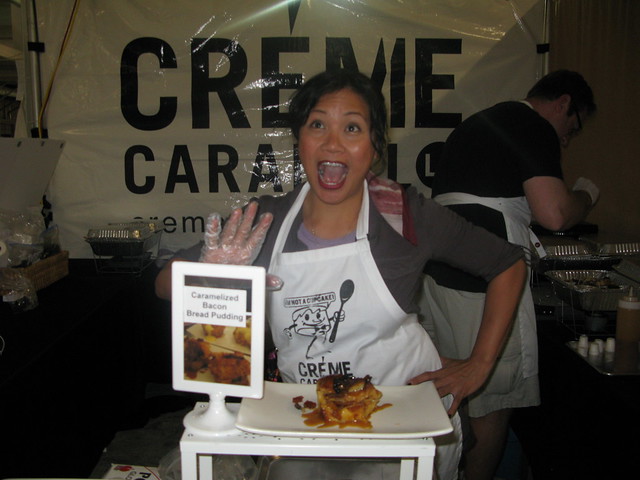 This weekend is Artisanal LA Spring Show 2011 and thanks to an invite to the sneak preview last night I was able to run around from vendor to vendor without having to muscle my way through crowds or fight for samples. It was glorious.

The event is spread out in a space at Santa Monica Place on the 3rd level near the Dining Deck. With only media and PR folk browsing the booths there was ample room to get a good look at the wares. But even with limited attendance during this media preview there were still lines for both the bars, one hosted by Veev and the other by Green Bar Collective.

The former presented an “apothecary bar” where guests were invited to “pick from a variety of organic herbs to create a cocktail remedy of your desire.” Yeah, kinda cheesy but cute. Their acai-based cocktails were a Spa Cooler and Veev Lemonade. And the organic spirits company offered two punches: one with vanilla vodka, orange juice and lime and the other with lavender, lemon and gin. Surprisingly loved the gin cocktail more than the creamsicle sounded one which ended up just tasting like orange juice with a faint hint of vanilla.

With about a couple hours to check out everything, I basically hit all the sweet spots that caught my eye and discovered some instant favorites:

I Heart Pies‘ Peep Pie made with a homemade graham crust and marshmallow mousse with chocolate chips. Even though I hate Peeps, disgusting massproduced styrofoam marshmallow birds, this pie is to die for. Creamy and indulgent. The 9-inch pie costs $25 but you can get a mini one for $5 at Artisanal. 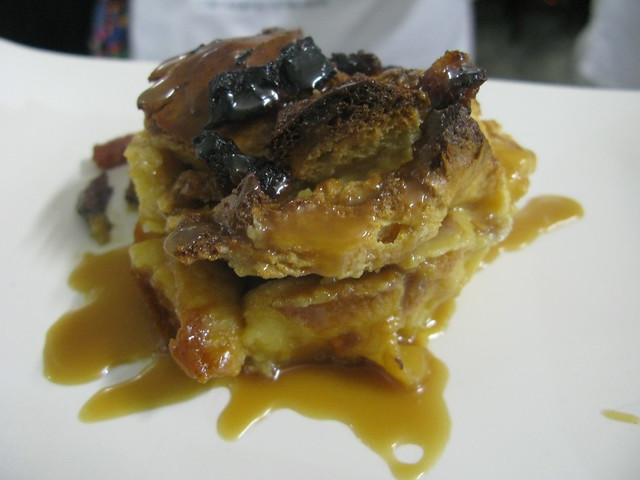 Creme Caramel LA‘s caramelized bacon and caramel bread pudding was touted to me by Nastassia of Manila Machine as “lechon flan bread pudding,” a Filipino dessert. Sold! Founder Kristina de la Cruz is a pinay but the fact that her desserts are phenomenal make it extra easy to support her. The “lechon flan,” was springy, moist and very sweet with that hint of savoriness. Love. It’s normally $28.50 but they have single servings for $5 at the show. And you can either enjoy it on the spot where they’ll heat it up for you or you can take a carton to go to enjoy and heat up at home later.

Crust by Stephanie Jayne’s cracker brittle. Dude, are you kidding me? So fab. It’s basically a chocolate-drizzled caramel brittle on a Saltine-like cracker. So simple and yet ingenuous. The sweet of the brittle balanced out by the saltiness and lightness of the cracker.

Cast-Iron Gourmet‘s bacon fat, OK this isn’t a sweet item but when I asked founder Rashida Purifoy why she was selling jars of bacon fat ($8) at her booth she told me that people had actually been requesting it. See, she cooks a lot of bacon for her business, and goood bacon at that, so her customers were always asking her for the residual fat which she triple filters. Apparently they use it for cooking, baking, etc. It was the etc. part that intrigued me. Rashida uses the fat to make bacon fat washed bourbon, something I’ve always wanted to make but didn’t for the simple reason I don’t cook. In any case she said she’d give me the recipe for a bacon bourbon cocktail she created which I’ll blog about later. 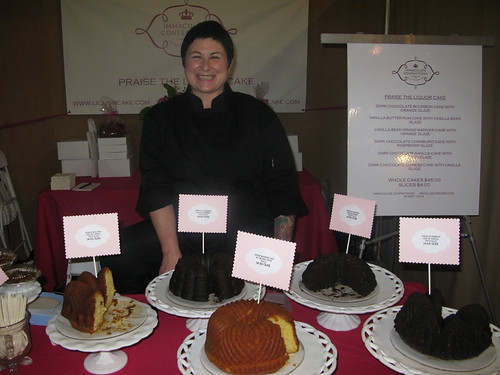 You’d think with the Immaculate Confections’ liquor cakes it would be the fact that their descriptions tout ingredients like Kahlua, rum and Guinness is what caught my eye but actually it was because the cakes looked like little Art Deco castles. Beautiful. Anyway, on a wayy closer inspection I sampled the vanilla rum cake with vanilla glaze and loved it. It’s not as boozy as your average rum cake but you definitely get the hit of rum in the initial scent and on the finish. The cake is so moist and sticky. It would be wonderful to enjoy with some really good coffee. Other flavors to consider include the Vanilla Grand Marnier cake and the Bittersweet Chocolate Bourbon cake.

Another not-sweet item is Mud Baron‘s seedlings. Mud, the winner of the Green Shorty award, is selling $1 seedlings for thyme, tomatoes, lavender, sage, etc. for Santee High’s Bistro Mundo to those brave enough to try and grow them. Fortunately Mud is so knowledgeable and encouraging that he was able to persuade me to take home tomato, sage and lettuce (?) seedlings, which apparently will do well in my home environment of Culver City.

So lots of fun, delicious stuff at this year’s spring show. I can’t wait to go back today and stock up on some more goodies!