Magnum Pop-Up's Bar Lounge at Royal/T: Where the Party's At 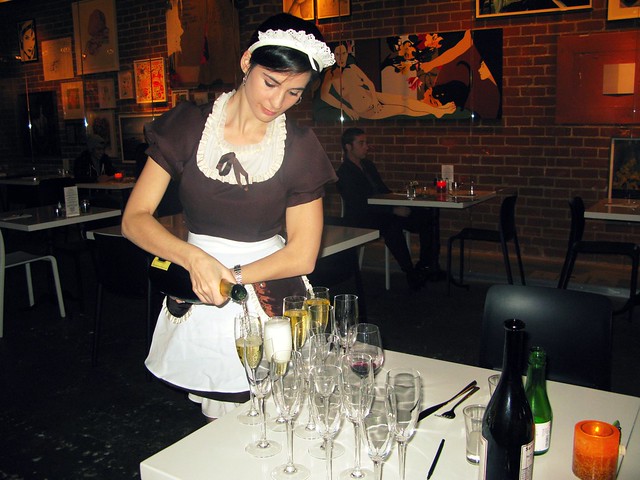 A fitting setting not only because it complements the event’s drive to raise money for the Japanese Sake Brewers Association‘s (JSBA) rebuild of the sake industry decimated by last month’s earthquake and tsunami but because, selfishly and simply speaking, I can walk there if I really wanted to. And bonus that there will be a bar lounge area for diners on a budget (me again!) who want to just pop in and enjoy Mahon’s bar bites along with Haskell’s wine, beer and sake pairings a la carte.

Haskell handpicked the wines ($14 a glass) and selected the sake and beer from Royal/T’s own list and you can take your pick of which one you want to pair your bite with.

Here, he shares what you can expect from a few of his bar bite pairings:

For a peek at some of Haskell’s pairings for dinner, check out my LA Weekly post.

The bar lounge will be located in the space usually reserved for the cafe/art gallery’s store and DJ Matt will be spinning to keep things festive. Casual diners can kick back and take in the latest funky art exhibit, Facemaker — a collection of street art by young artists from around the world — with their paired bar bites.

By the way, Magnum is also conducting a silent auction to benefit the JSBA. You don’t have to attend the dinners to bid, just email your bids to magnumdh [at] gmail.com.

The auction features brag-worthy items like a dinner by five celebrity chefs — including Michael Voltaggio, Walter Manzke and Joseph Mahon; lunch at Jitlada with well-known food blogger My Last Bite, rare wines like a 1983 Pothier Rieusset Les Rugiens and a butchering class from the newly opened Lindy & Grundy butcher shop in West Hollywood.