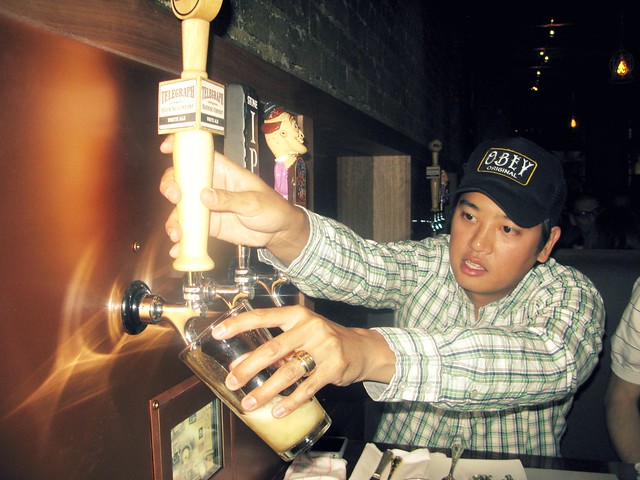 When I was a kid and drew up blueprints of my dream house — you know the one I’m talking about, where you put a swimming pool on the second floor and a dance floor in the middle of the kitchen — I had also imagined my fab pad to have beer taps. OK, by “kid” I mean when I was 21. So when I first got wind of City Tavern‘s Table Taps, where three of its booths feature three beer taps so you can pour your own beer, I was beyond elated. A childhood dream come true! 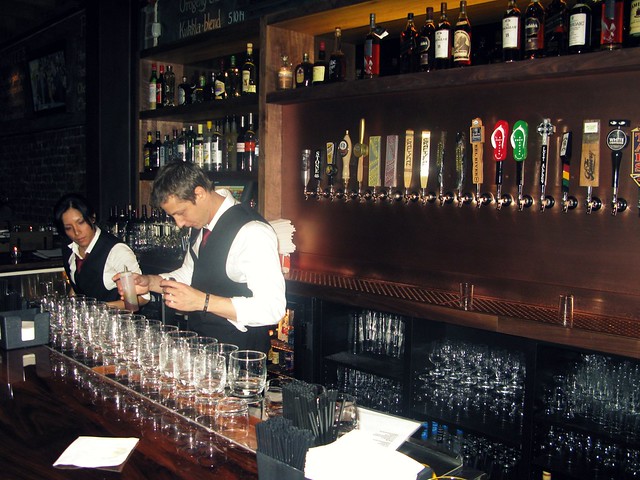 Luckily I was invited to the Culver City barestaurant’s friends and family night before it opened its doors this Monday and was able to score one of these coveted booths along with beer guys Josh of Food GPS, Steven of Brand X, John of Social Domain and Jimmy of the upcoming KTown beer bar, Beer Belly.

Unfortunately, the taps only feature crowd pleasers like Downtown Brown, Stone IPA and Telegraph White Ale. Makes sense, I guess. If you’re at a table with five of your friends, not everyone is going to want the Rubicon Monkey Knife Fight.

But since I was at a table of beer aficionados, we hardly touched our table taps. Instead we broke the friends & family night rule of just cocktails, house wine and table taps, and bullied our way to the 22 beer taps behind the bar, ordering tasters to our beer belly’s delight. ****

There aren’t any organized flights available but you can order tasters ($3-$5) of any of the beers. Since I love porters and stouts, I enjoyed the Santa Cruz Dark Night and Cismontane Black Dawn. John ordered an actual pint of Stone Chipotle Smoked Porter, which I didn’t like at all. Tasted like chipotle sauce. Spicy and gimmicky. Meh. 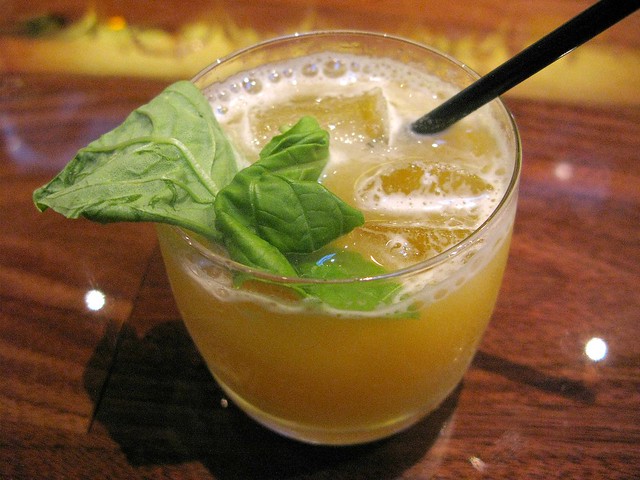 I would have ordered more beer, after all this place is within stumbling distance of my apartment, but I had already enjoyed the specialty cocktail, Garden Pig: Whistlepig Rye, orange juice, lime, agave nectar and basil. Fortunately this drink, unlike the ones at sister restaurant Rush Street down the street, wasn’t overly sweet. I was afraid the OJ would dilute the lovely rye, but it didn’t at all. Very light and drinkable.

John and I, Manhattan compadres in arms, ordered up Whistlepig Manhattans (not on the menu) and made sure to ask for it stirred but I was curious if they would have figured that out on their own since this is more of a beer bar than a cocktail one.

As for the food, the menu is broken down into small plates (Share and Plates) and entrees (Held and Savor). Since our night was comped, we ordered a bit of everything — oysters, meatballs, pan-seared scallops, crisp pork belly, CT burger, grilled cheese, Jidori chicken, Arctic char, and I think all the desserts.

Hey, I was sitting at the table with five apparently hungry boys, that’s how it was going to go down. 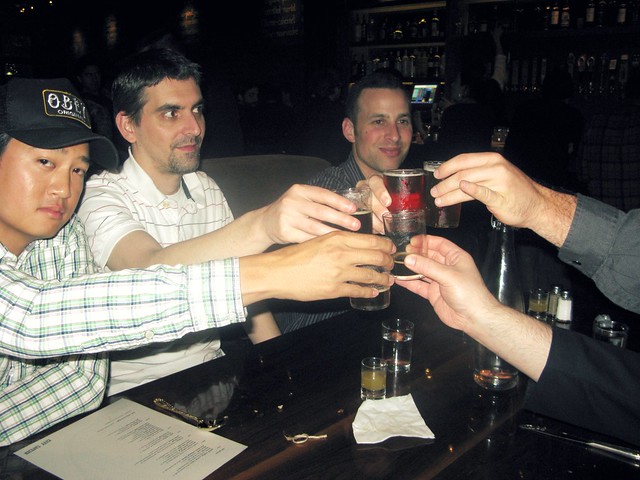 For me, big hits were the meatballs in sweet and spicy sauce, so savory, as well as the simple but deliciously spicy grilled pimento cheese sandwich. But the Arctic Char was very Spartan, a slab of fish sitting in an ink spill of sauce. Glad it was comped because I would have at least wanted a side of vegetables if I was going to be forking over $16 for it.

Out of the trio of desserts — pear galette, chocolate tart and Carmela ice cream — **our table couldn’t get enough of the creamy salted caramel ice cream and we ended up ordering another pint.
**

I was so excited about City Tavern that I tried to go back on its opening night yesterday. But the place was packed to the gills with a 40-minute wait, and even the hostesses suggested that we go elsewhere, Rush Street to be specific. Yeah right!

Later I heard that the table taps were down for an hour due to a glitch with the Internet but the bar taps were fine. Just as well, if I was able to make it in, I would have gladly stuck to the bar taps. ****

Those table taps just seem more trouble than they’re worth. To get a specially-equipped booth, you have to make a phone reservation and then there’s a 2-hour time limit for the table. But I can see how that would be fun for out-of-towners or folks who really do just want to pull the handle.

In any case, really happy that City Tavern opened up in Culver City. Might be a bit too pricey as my regular dining destination but I’d gladly stop by for a tasty brew or two or three.