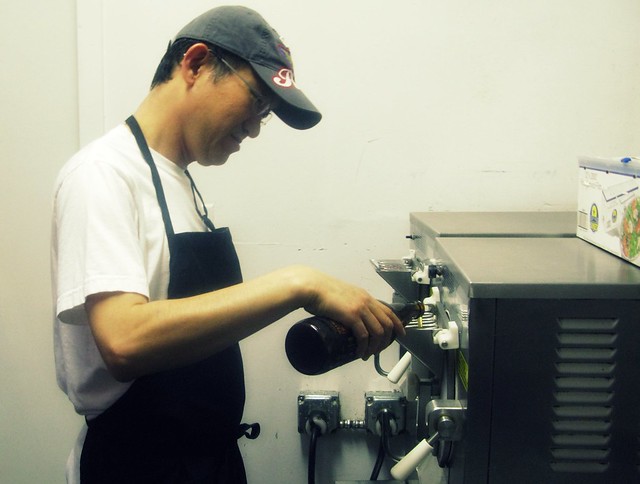 I knew my beloved Taro Coconut was doomed from the start of this week’s Scoops Westside ice cream election on Facebook. Maple Whiskey was its rival after all. Bloggers (who seem to comprise the vocal majority of the ice cream shop’s fan base) love booze and they especially seem to love whiskey. So Maple Whiskey won with 51 votes versus the 37 votes Taro Coconut garnered. This means that tomorrow, Scoops Westside will be selling two tins of the boozy flavor. Boo (I want Taro Coconut!) and yay (booze!).

Scoops Westside proprietor Matt Kang (@Mattatouille) said that he usually sells about a flavor a tin but ordered up two this time. Amazingly, he’s skeptical of selling out of the popular flavor but I disagree, I see a pint of Maple Whiskey in my very near future and predict that many others will share the vision.

So which whiskey will Tai Kim, Scoops creator, use for the coveted ice cream? He usually goes with Jim Beam but for this occasion he’s going to use Jameson Irish Whiskey. “It’s cheap and it’s sweet and a little caramel apple-y,” says Matt. That’s a good enough reason for me! However, I’m curious to see if the lightness of the Irish whiskey will get lost in the maple. Only one way to find out.