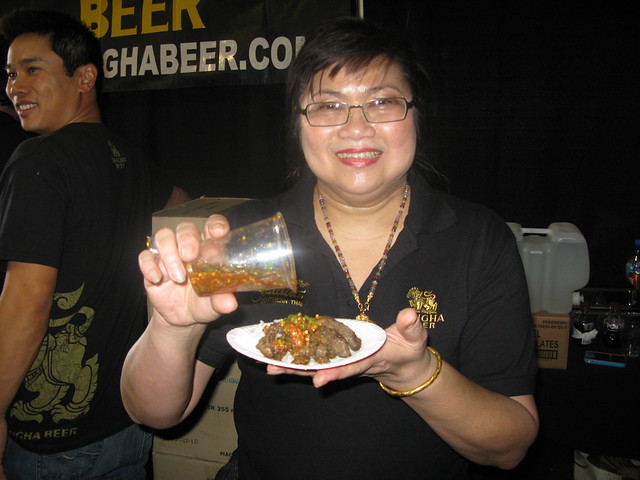 Those first 30 minutes at LA Weekly‘s Gold Standard 2011 yesterday was an eating spree. Yes, I only had half an hour — afforded to me by a media pass — to take pictures and eat and drink as much as I could of the 40 or so food vendors at Jonathan Gold’s annual food event before the flood gates were opened at 1pm to the general public who had lined up in a long, serpentine queue in the Petersen Automotive Museum. I had suffered through the first Gold Standard event in 2009 and didn’t want to be shut out again by the clusterf*ck of foodies or prematurely sold-out food booths — issues that, frankly, prompted me to steer clear of last year’s event. 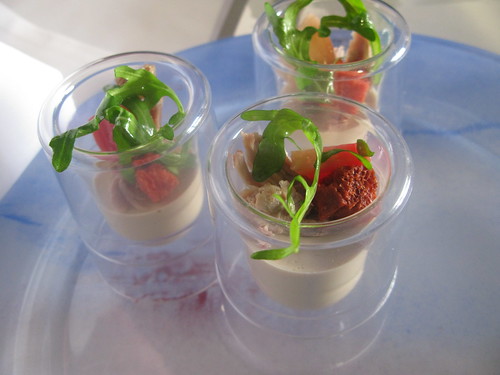 So I ran around snapping photos of Loteria Grill‘s tacos de lengua, Nickel Diner‘s bacon maple doughnuts (which apparently went well with the bourbon next door),?hey, Bulleit bourbon?no, focus! Guelaguetza‘s tamal de mole Amarillo?ran past A-Frame‘s Fine Print cocktails and kettle corn with my hands as blinders to outside where I allowed myself to snatch up Park’s BBQ and then to Manila Machine for the lumpia Shanghai with pork belly and pineapple adobo.

There, I tried chatting up my peeps while Chef Greenspan of the Foundry on Melrose yelled loudly from his booth across the way. He laughed and projected to the crowd as if he were on the Iron Chef. In any case, the Manila Machine folks were thirsty in the warm sun so I went to fetch them A-Frame cocktails. After dropping those off it was once more unto the breach. Drago Centro’s chef de cuisine Ian Gresik handed me a foie gras parfait with beef croutons saying he had four of those for breakfast this morning. I was so famished I shrugged off that pang of guilt and scooped a dollop into my mouth. Hm, creamy and rich, but I was still hungry.

Then there were the Vietnamese crepes from Susan Feniger’s Street. Meh. Fortunately Mozza‘s nommy Mozza Caprese with fresh burrata perked me back up. Would have been nice to follow that up with whatever Krissy Lefebvre was serving up at the Ludo Bites booth (Chef Ludo just had back surgery so couldn’t be there), but I didn’t want to bother trying to penetrate the wall of people. Instead I grabbed a pot pie from Good Girl Dinette across the way and a not-so-impressive cocktail shot made with Moon Mountain vodka. 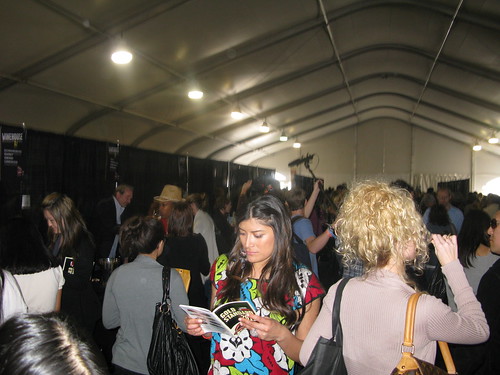 Later I ran into ol’ friend John of Social Domain who introduced me to Jitlada‘s owner Jazz — so adorable and humble even if she was telling us about the celebrities who have been popping up at her Thai restaurant. Apparently Natalie Portman stopped by pre-pregnancy. While John grabbed some extra hot sauce to make his Crying Tiger dish “Thai people hot,” I dug into the vegetable curry. OMFG it was STILL too spicy. Fortunately the Singha Beer booth was just next door so a tall cool lager soothed the burn a bit. When that wasn’t quite enough, a follow-up glass of Domaine Carneros sparkling helped.

The whole middle alley of the event was dedicated to wines provided by the Wine House. I shied away from all that since wine usually puts me to sleep, and was kind of disappointed that there weren’t as many cocktails as there seemed to be in the first Gold Standard. But I guess they were saving those for JGold’s annual cocktail party with Zocalo at Union Station. Ah well. At least there was Bulleit Bourbon, Babita’s sangria and A-Frame’s delicious Fine Print with rum, hibiscus, falernum, like and orange bitters. By the way, props to A-Frame for having a seemingly bottomless batch of cocktail.

By 2pm Jar was already sold out and packed up so festival goers discarded their plates on its empty table. Soon the Foundry followed (missed out on the grilled cheese sandwich!) as well as Mo-Chica and Ludo Bites. But I wasn’t too peeved by that since I had had my fill for the day, enjoying food fest favorites like Starry Kitchen’s chicken curry, Mozza’s caprese, Akasha’s jam selection, Guelaguetza’s tamales and Park’s BBQ. 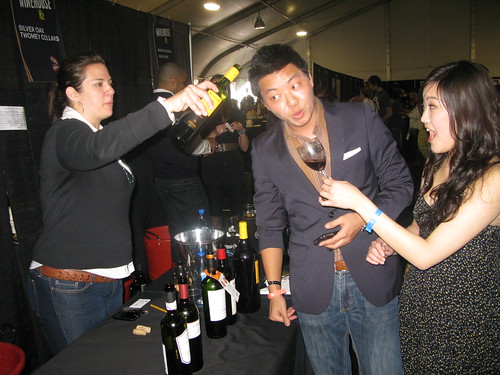 And it was fun running into Tweeps like @Mattatouille, @StreetGourmetLA, @MidtownlunchLA, @JulieWolfson, @SauceLA, @NomsNotBombs and @MyLastBite. I also got to congratulate Krissy of Ludo Bites on her and Ludo’s new show on Sundance and chatted with Akasha Richmond about her upcoming tequila dinner as well as her daughter Amrit’s social media successes. And Celestino Drago and Ian Gresik kept me company while I waited to see if I won anything from the Heal the Bay raffle (nope!). Yeah, extra schmoozy.

But the icing on the cake at the end of the day was finally introducing myself to the big man himself, Jonathan Gold, who I had previously been too shy to go up to. At the end of the day, he seemed happy with the event and talked about how strange it was to have a camera crew following him around for the documentary they’re doing on him. We spoke briefly about cocktails and then he was gone, posing in someone else’s picture.

I surprised myself by staying until the end of the event, having made up my mind beforehand that I was just going to stay for an hour or so to take pictures. But the good friends and good food made it difficult to tear myself away. What a truly fun day. Really glad I stuck around.