Who Makes the Best Mai Tai in All of LA? 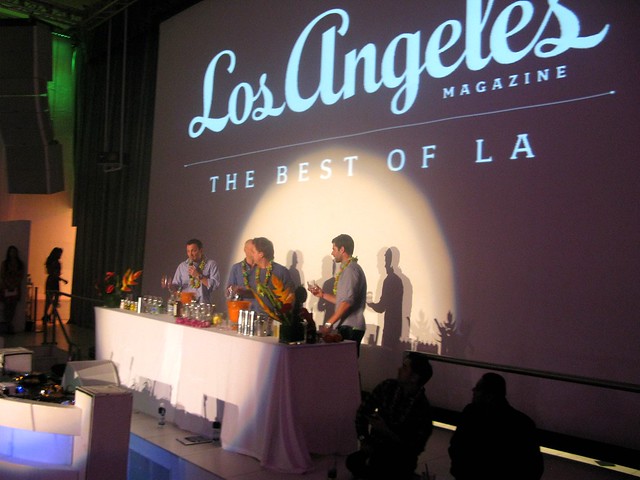 Who's the tastiest of them all?

Aidan Demarest’s mark on the L.A. cocktail scene is as the ringmaster. He’s run some of the hottest bars in Los Angeles like Schmeven Schmand and The Edison, helped build the cocktail programs of Pasadena’s 1886 and Hollywood’s Spare Room, thrown together must-do cocktail events like guest mixologist bar nights — Radio Room and Red Rover, and of course orchestrated the infamous Blogger Barhop. Suffice it to say, I think he’s awesome. 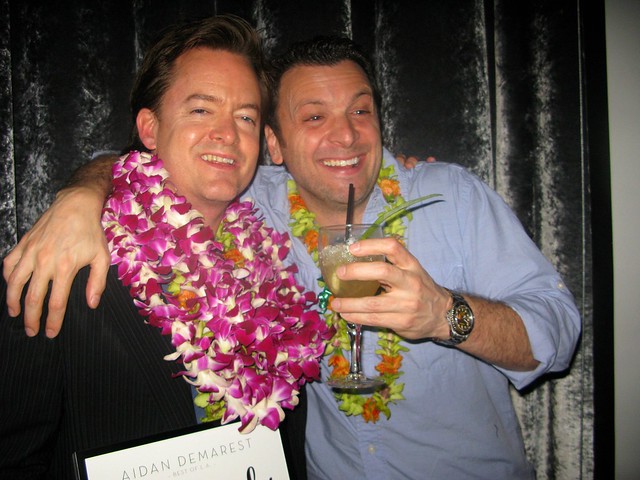 But I have to admit, he wasn’t my choice for the winner of Los Angeles Magazine‘s Mai Tai Mixoff last week. And, yes, I told him that after the competition, which was held at Hollywood’s supperclub. He had competed against Adrian Biggs of La Descarga and Matthew Biancaniello of the Library Bar to create the best Mai Tai in all of L.A. and won.

Now, before you Mai Tai purists get your pink, palm tree logoed panties in a wad over “hey, what about Tiki Ti?” **this contest was a challenge to nine of the top mixologists in L.A. to create their take on the classic tropical cocktail. So it was with this in mind that I judged the final three contestants’ drinks.
**
Matt created Lost in Laos, an uber exotic, creamy concoction with Crusoe Silver Rum, coconut milk, Green Chartreuse and sprinkled with little purple flowers. He had described it as “a Mai Tai and a Pina Colada making love on the islands of Thailand.” Suffice it to say, I loved his version the most. “You just have a hard-on for Matt’s cocktails,” Aidan said after I told him. “Yeah, I do,” I replied. Matt’s Mai Tai is available for your tasting pleasure at Hollywood Roosevelt’s Library Bar.

Contestant #2 Aussie Adrian, who is so sexy that host Zane Lamprey (HDNet’s Drinking Made Easy) said that he wanted to put his shrimp on Adrian’s barbie, **used ingredients that he thought would influence an L.A.-inspired Mai Tai, namely Mexican food.
**
So his recipe calls for hibiscus liqueur and a cilantro-rubbed rim as well as Crusoe Silver Rum, Jamaican Rum, honey syrup, lime and grapefruit juices.

La Descarga doesn’t currently serve Adrian’s Mai Tai because it would be kinda tough to do at the busy bar but LD’s general manager Steve Livigni said that maybe when the weather gets warmer they could give it a try. Adrian said that if they pre-batched the cocktail it could work. So check back with LD in the spring.

So, yeah, I told Aidan why his cocktail, The Evening Glass-Off (a surf term), wasn’t my first choice. “It tasted like a really good traditional Mai Tai and I thought the point was to create a whole new version of the cocktail,” I admitted. Aidan’s recipe calls for Crusoe Silver Rum, Crusoe Spiced Rum, Orgeat, simple syrup and chipotle-spiced pineapple. It was potent, sweet and delicious. Aidan basically formulated a Mai Tai cocktail that he would like to drink. It’s also a cocktail that I’d like to drink…and drink. Fortunately, it’s available at Hollywood Roosevelt’s The Spare Room for a revisit.

Now when fellow judge Steve Livigni pulled together the list of nine mixologists to compete in this mixoff, he had approached Aidan asking him to choose one of his bartenders to represent The Spare Room. However when Aidan’s wife heard that the grand prize was a trip to Hawaii, she convinced him to enter the contest himself. The couple first got engaged in Hawaii 20 years ago and haven’t been back since. Suffice it to say, they’re long overdue for a return trip. Just ask Aidan’s wife. Congrats, Aidan, and aloha!

Look for a recap of the Mai Tai Mixoff in Los Angeles Magazine‘s May issue.

Slideshow after the jump.