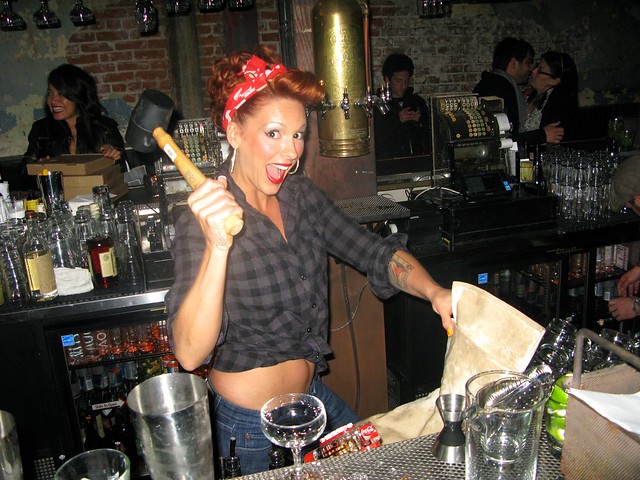 Bartender Mia goes Rosie the Riveter on that ice.

I am the mayor of Harvard & Stone in East Hollywood. How did that happen considering last night was the new bar’s opening night? My blogger friends wondered, skeptical. Ha! I was able to score an interview for LA Weekly‘s Squid Ink with its general manager Steve Livigni, also of La Descarga, weeks before the bar opened and while it still had sawdust on the floor and plastic sheets covering its plush leather couches. 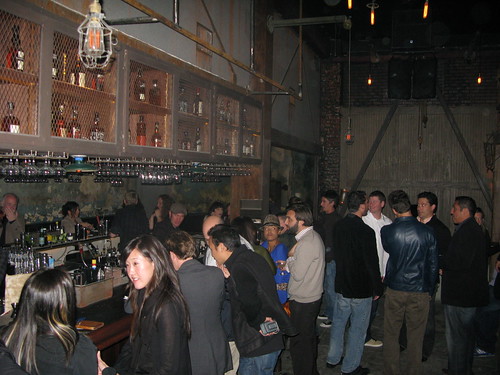 I wasn’t allowed to take pictures in its state of undress but Steve gave me a sneak peek tour of how the bar was going to look. Shadow boxes on the walls filled with cocktail artifacts, a semi-private back room meant to look like the factory boss’ office, and a back bar stocked with an ever-changing spirit selection and cocktail menu. It was going to be 3,500 square feet of cocktail gorgeousness dedicated to American craft booze, i.e. spirits made in America like Wisconsin’s Death’s Door and Kentucky’s Elijah Craig.

So, last night, after a week of delays, the bar finally opened its huge, rusty-looking medal sliding door. There was a door guy who asked me who I was there to see. “Is this not open to the public yet?” I asked. “No, it is but we just want to keep it under control,” he smiled. At 9pm, the bar was still easy to negotiate with open spots at the bar and ample room on the plush couches in the back. But the back bar itself was a-buzzing. 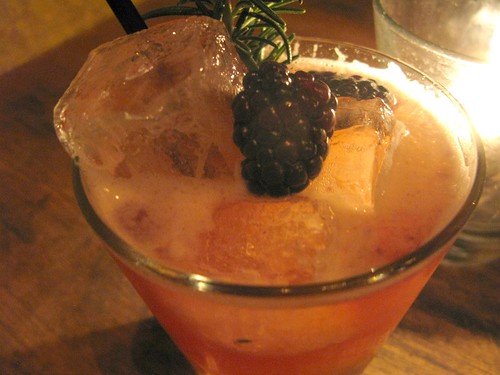 If you see anything you like here, you’re SOL as the above cocktails were only available last night. Such is the way of Harvard & Stone’s back bar. It will feature a new cocktail menu every night. And every month will showcase a new spirit, so you have til the end of February to enjoy whiskey back there. Next month it’s all gin, baby.

But the front of the house offers a tasty selection of specialty cocktails, too. I’m dying to try Baby’s First Bourbon: Bulleit bourbon, orgeat, lemon juice and Angostura bitters. And an Apple Martini made with Original Moonshine? Yes, please!

Like the back bar cocktail menus, live musical acts are just as “spontaneous.” There is a stage, drum kit and guitar and even a green room should any bands feel like throwing an impromptu show. Steve and the H&S team have musical connections so promise some great bands, maybe even low-key post Hollywood Bowl gigs. Who knows? The thing is that since Steve says this isn’t really a live music venue there won’t be a fixed calendar. However, if you keep your eye on the bar’s Web site there may be the occasional heads-up.

In any case, I love this new bar and wish it were my neighborhood bar. But that doesn’t mean I won’t try and hold onto my Foursquare mayorship with both cocktail-sticky hands.

Best seat in the house? The stool on the balcony overlooking the back bar.