Go Burger’s Milkshakes Bring All the Drunks to the Yard 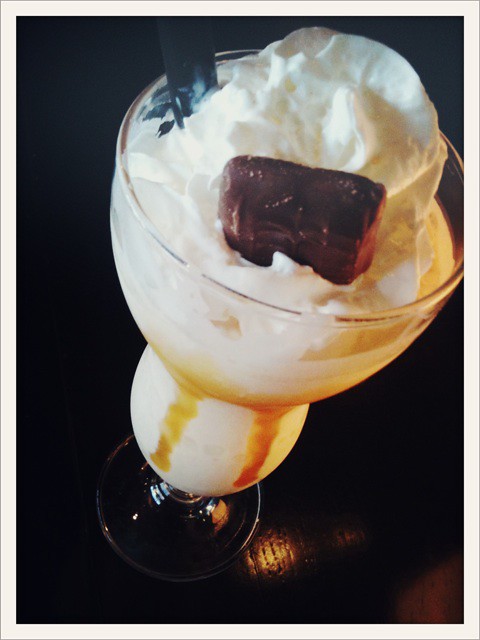 Another burger joint opens in L.A., no big deal, I thought. But when it involves adult milkshakes it’s a huuge deal. At least to me. Spiked shakes are all that is good and right with the world, combining my favorites of creamy ice cream and booze. I’ve had 8 oz.’s off-the-menu cocktail shake, Kitchen 24’s Adult Swim shake and 25 Degree’s boubon salty caramel shake, but Go Burger in Hollywood is the only place I’ve been that has a dedicated spiked milkshakes menu ($11 each) consisting of five indulgent, boozy combinations. Plus there’s even one involving tequila, a rarity since most cocktail shakes seem to go for the sweet spirits of syrupy liqueurs:

As tempting as the Aztec Mocha sounded, I went for Grandma’s Treat, which is the only shake here with bourbon. Plus I appreciate its simplicity of vanilla ice cream with caramel. All the other shakes just sounded way too sweet for me with their use of liqueurs and syrups.

The awesome thing about Grandma’s Treat shake is that I could actually taste the Maker’s. Apparently, Gammy likes her bourbon, a lot, but at the same time she wants to actually taste the milkshake, too. So there’s not too much liquor where it’s unpalatable or where you get buzzed, but just enough where the sweetness of the bourbon complements the creamy vanilla ice cream and the bonus bits of caramel. So frickin good! Extra bonus is that it comes with a little square of chocolate-covered toffee, reminding me of Grandma’s Christmas tin of English toffee.

The only problem I had with the shake is that it prevented me from enjoying my order of duck fat fries. After I got through the peppery salmon burger and the shake, I couldn’t even touch those fries which called to me with their duck fattiness and creamy dip. I have to keep reminding myself that the shake is a dessert and not an appetizer. But it wasn’t too much of a loss since the fries were too soft for my taste so it wasn’t like I’d be missing the crunch when I reheated them up at home.

In any case, really happy Go Burger opened up on Vine and Sunset. A great place to grab dinner before a movie at the ArcLight. Before my only options were Kitchen 24 (blech) and the Bowery (great for beer but kinda pricey for casual).