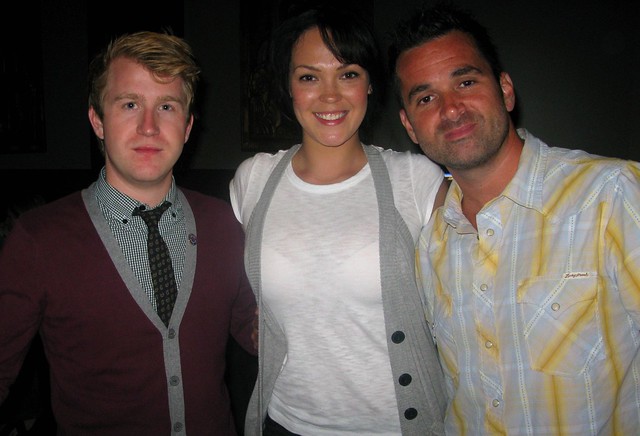 Despite what many of you may think, my boozing it up every night in search of the perfect cocktail isn’t all that debaucherous. I usually keep my drinking to two max a night out. My intention is to enjoy the cocktail, not get wasted. Yeah, pretty boring. But Dan “The Imbiber” Dunn, Playboy magazine’s nightlife and liquor columnist, manages to balance the debauchery you only dream of (which inevitably includes strippers, porn stars and some of the country’s top bartenders) with writing for Playboy, hosting his Imbiber podcast and writing a book. I’ve said this before, but the man is my hero.

His second book, Living Loaded: Tales of Sex, Salvation, and the Pursuit of the Never-Ending Happy Hour, hits the bookstores tomorrow, February 8 but you can get a signed copy at Book Soup at 7pm plus party with the Imbiber himself that same night in West Hollywood. Following his Book Soup booksigning (which promises free wine), the afterparty will be at Baby Blues BBQ at 9pm where there will be free beer, barbecue and Bombay Sapphire gin cocktails. All you need to get in is a copy of Living Loaded. A small price to pay for a brush with epic debauchery.

By the way, Dan (and his publisher Random House) was good enough to allow me to excerpt one of the many entertaining list from his new book. In light of my recent blogger barhop, “How To Not Ruin Your Life While Drinking” is a top 6 that I think all boozers should keep in their pocket, especially Rule #6!

1) Never do drunk what you wouldn’t do sober.
UNLESS it involves the following: striking up conversations with supermodels, running with bulls in Pamplona, flashing your boobs on Bourbon Street, shopping for lingerie and sex toys, hanging out with Gary Busey, filling out the census, fielding calls from telemarketers, bowling, eating microwave burritos at 2 a.m., telling your asshole co-worker to go fuck himself, flashing your boobs in Pamplona, sending lurid messages to your Facebook friends’ hottest Facebook friends, shaving your head, naked skateboarding, telling your asshole roommate to go fuck herself and writing a book. Note that I did not include anything about responding to emails from strangers who turn out to be your boss’ boss.

2) Don’t shit where you eat.
We went over this in Chapter 10. Hooking up with the staff at your favorite bar. You may get laid a few times, sure. Maybe even turn into a nice little fling. But when, inevitably, things go south with the hottie who slings drinks at your own personal Cheers, she’ll go back to work and tell you to go to hell — hell being anywhere but her bar. And then where are you going to go to watch Phillies games and eat pork chops drizzled in apple chutney and balsamic reduction you fucking moron? WHERE?!!! Oh, god, this is too painful. Moving on.

3) When making decisions with women, apply the 70-percent rule.
This applies to all decisions more significant than what to eat or what movie you should see (for those, don’t even waste your time. Just let her have her way). For all subjects with graver consequences than this (Should we move in together? Keep the baby? Change our Facebook statuses to “it’s complicated?”), you need to do some quick math in your head. Tally the ten most recent times you and this girl were together. Were you drinking heavily on seven or more of those occasions (i.e. 70 percent)? If so, the answer is no. Whatever it is she wants, if you need to get wasted around this person to find them tolerable, the answer is no. Unless she wants to break up, of course. If the tally is under 70%, you don’t have to say no, but you should wait until you sober up to actually make a decision. As a side benefit, this makes you look like the responsible one.

4) Carry rubbers.
Like my dear old grandma always used to say before her liver finally gave out (my other grandma, not the one who got hit by a bus, that is), nothing takes the shine off a drunken roll in the hay faster than a baby. Or an STD. Or a baby with an STD. While researching this item I Googled “drunk sex” and came across a video made by a cute recovering alcoholic in which she waxes nostalgic about the days when she used to get blotto and screw every guy in sight. Among other things, she claims she loved drunk sex because it’s sloppy and crazy and messy and no one cares and you’re bleeding out of different orifices. Been there. Luckily you can avoid the vast majority of the problems associated with awesome drunk sex, just by tossing a bag over Mister Happy at the right moment. But that isn’t going to happen if you’re not holding. So be holding.

5) Don’t consume 40 shots of vodka and take a nap.
In the trade, we call this “riding the John Bonham express,” next stop Pulmonary Edema, everybody off the train. And I hear that town sucks.

6) Avoid cameras.
Hard to overstate the importance of this one. Thanks to this newfangled thing they call the Internet, there’s a high probability that any remotely embarrassing thing you do in front of a camera will be available almost immediately for scrutiny by millions. Indeed, a Google search for “drunk photos you don’t want to be in” turned up nearly 9 MILLION results, including those great ones of Mister Braveheart himself, Mel Gibson in a bar with two blondes about a half hour before he called a female cop, and I quote, “sugar tits.”

Copyright 2011 by Dan Dunn
From the book Living Loaded: Tales of Sex, Salvation, and the Pursuit of the Never-Ending Happy Hour by Dan Dunn, published by Three Rivers Press, a division of Random House, Inc. Reprinted with permission.

Also, here are a couple of tasty-sounding cocktail recipes from Copa d’Oro’s Vincenzo Marianella and La Descarga’s Steve Livigni that the guys did for Dan’s book. Each chapter opens with a cocktail recipe from a renowned mixologist, i.e. these guys, Natalie “The Liquid Muse” Bovis, Allan Katz and Dale DeGroff.