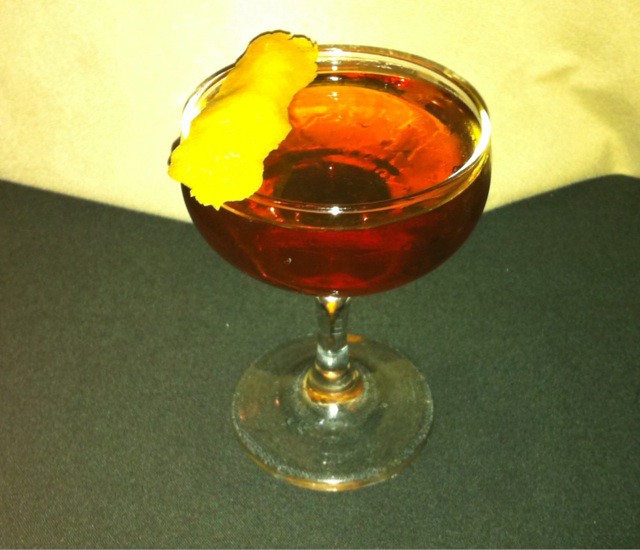 While celebrating my bf’s bday at 320 Main in Seal Beach the other night, owner/mixologist Jason Schiffer told me that he created this new cocktail called the Dirty Ground. He basically described it as a chocolate martini for the cocktail curious as well as the cocktail savvy.

“When people came in and wanted chocolate martinis, which we don’t have the ingredients to make, I wanted a transitional drink that had a little more complexity to kind of pull those people into this craft cocktail thing,” Jason said.

Break the coffee beans into a mixing glass. Add all the ingredients, stir and strain into a cocktail glass. Garnish with orange peel.

So why the Cynar? “I tasted a 100% chocolate bar the other day and that bitter, really dirty, earthy element to it and it reminded me of a coffee bean,” Jason said. “So I decided to put the two together and it needed some more sweetness, like a good base. So I used that Bols Genever because it has that malty roundness to it and that worked really well with the chocolate. But it needed a lot more bitter, earthy elements to come through, that cocoa, so that’s when I added in the Cynar which really played like that 100% chocolate bar. And for some reason, I don’t know why, when I picture the chocolate, I saw a thing of lavender. And when I added the lavender it just rounded everything out and made it perfect.”

Don’t worry, if you’re usually an imbiber of the creamy chocolate martinis of the ’90s, Jason said that he’ll back off the Cynar a bit so that the cocktail is sweeter.

So, how did it taste? Well it wasn’t especially chocolatey, except midpalate and nose. And definitely not sweet. You smell the Bols immediately and that bitterness of the bitters and Cynar show up on the finish. It’s the chocolate martini for the cocktail serious, that’s for sure. One of my friends at our table who is a drinker of sugary cocktails, said of the Dirty Ground, “Tastes like a bunch of alcohol to me.” Well, all right!

The Dirty Ground is now on the drink menu and will appear on the food menu in the next couple weeks.