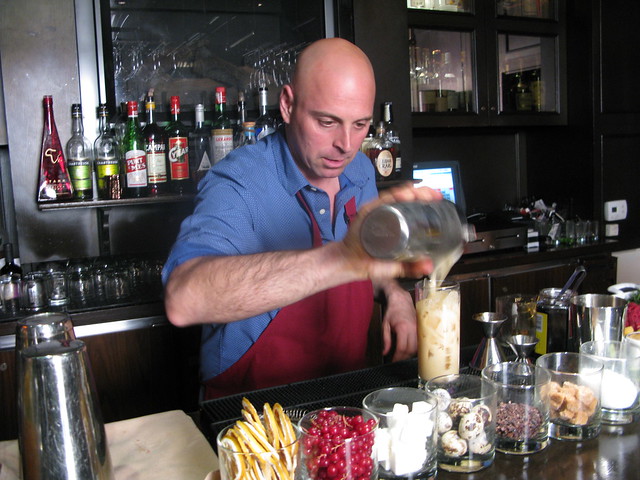 Yes, Matt includes the beer in the shaker.

I’ve wanted to like beer cocktails. I mean, come on, the best of both worlds. But, alas, I just have no interest in Irish Car Bombs anymore. I know, guess that means I’m ollld. In any case, when I visited Matthew Biancaniello at Hollywood Roosevelt’s Library Bar over the weekend, he showed me his reinvented beer cocktail: Hopping in the Rye.

Several weeks ago, he first introduced me to this cocktail as an IPA Manhattan, made with hops-infused rye. But since I don’t like IPAs — too pine-needley for my tastes — it wasn’t my favorite of his creations. But fast-forward to this weekend and Matt totally rejiggered the recipe with tasty results.

Now the cocktail is made with hops-infused gin, caramelized honey, grapefruit juice (to complement the IPA), lemon and IPA, provided by his friends at Golden State on Fairfax. The hoppiness emerges really late on the finish so I enjoy the cocktail from beginning to end. Since Matt includes the IPA in the shaker with the other ingredients, the liquid pours out all frothy, resulting in an almost creamy concoction. Do that up over ice and it’s a thirst-quencher.

I’m horrible with names but figure the drink will call for something with a sense of humor since it involves beer. Fun!

Here’s my post on LA Weekly‘s Squid Ink, which includes which famous beer fan whom Matt hopes will like it, too.