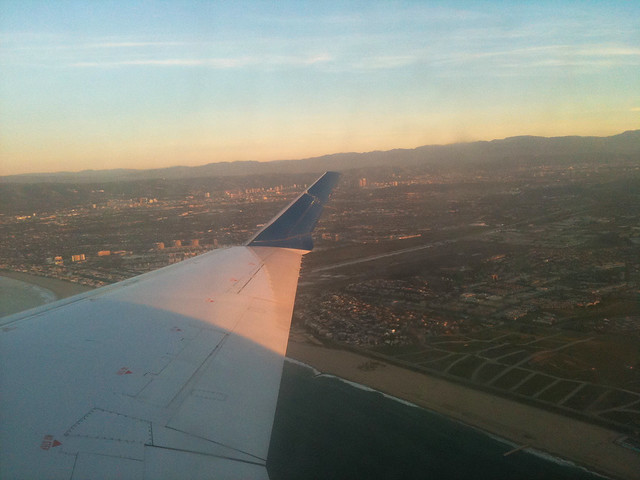 Have you ever done something so stupid that you just want to do yoga so you could have the flexibility to kick your own ass? Yeah, that happened to me last week when I realized that I forgot my ID at home right when I was walking up to the security checkpoint at LAX. With only 20 minutes til boarding, there was no way I’d be able to get home, retrieve my wallet (which was just sitting on my bed) and still make the flight in time. Arrgh!

Alaska Airlines, who I booked my flight with, was of no help. First they said I had the option of going on the next flight out for just a $50 fee but would have to call in three hours before said flight. They assured me that chances of getting on that flight were good since it still had ample space available. But when I did call later they said oops all booked up and then offered later flights for the full price. Um, thanks for nuthin!

Since this trip up to Oregon was a family vacation with my boyfriend’s sisters AND it was also to celebrate his birthday, I felt extra bad for making him miss it. No, he did not just leave my stupid ass behind, although he probably should have.

So I tried all the cheap airlines I could think of to see how much last-minute flights were. No luck with Jet Blue or Southwest, even if I picked the Long Beach airport. Everyone was charging $500-$600 for the one-way flight. “Guess we’re not going to Oregon,” bf said, defeated. But I would not give up and as a last measure, Googled “cheap last minute flights.” That pointed me to Priceline.

I’ve never used Priceline before, as I was turned off by having to bid on a travel schedule that isn’t revealed until after you pay for it. But I was desperate. Unfortunately, the Web site also only displayed the same $500 prices. And just when I was about to just throw myself in front of the next oncoming car, I saw further down the page that Priceline had a deal where you could get airfare plus a rental car for HALF the price of a regular flight!

That’s right, for two people, it was going to cost me $600 for two roundtrip flights and one rental car (two-day rental)! So much better than the $1,200 we thought we’d have to spend just to get over to Portland and about how much we paid for the original Alaska Airlines flights. Plus we wanted a car anyway.

We couldn’t get a flight the same day and had to go the next day instead and Priceline booked us on super early flights but still so worth it. (We ended up still taking our original return flight from Alaska Airlines since it was at a more reasonable hour.)

In any case, figured if any of you ever find you need a very last-minute flight, Priceline would be the way to go. Like I said, it was the first time I’ve ever used them and am really happy with how it turned out. Only minor complaint though is that you can’t call them if you have a problem until AFTER you book your flight. But at least they saved my weekend plans.