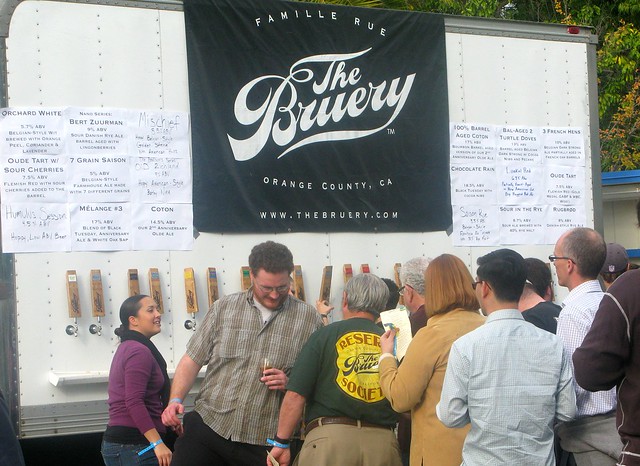 If you’re a member of The Bruery‘s 2011 Reserve Society, you are one lucky SOB. Sure, the $195 membership is pricey for a casual beer drinker but it’s an investment for beer enthusiasts thanks to all the goodies they get, i.e. several limited edition beers, discounts and members-only events. (By the way, membership for 2011 is sold out so better luck next year.)

But the best perk of all has to be entrance into the Reserve Society Initiation Party. Each member gets two tickets to do with what they want. And, thanks to generous beer dude Alex Davis of Bike. Bus. Beer. and Library Alehouse, I was lucky enough to score a couple tickets! 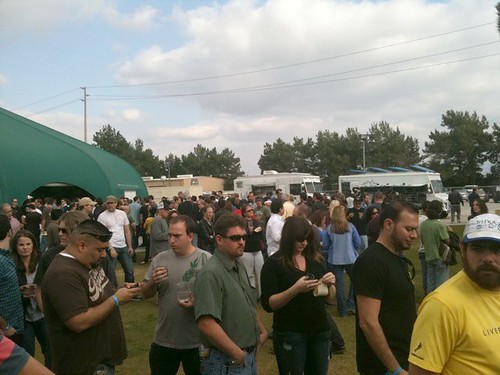 Of course little did I know that getting into the exclusive party, held at The Phoenix Club aka OC Oktoberfest central, was going to be the easiest part of the whole day. Without getting into it too much: Anaheim, limited parking, mile walk.

And the long-ass line that greeted us at the entrance, even though we arrived an hour and a half into the event, was almost enough to make me want to turn around and go home to cry in my pillow. Fortunately, Alex was there to speed us through the line. Pfew!

Only thing was that once inside, we were greeted by even more lines. Lines to each of the four food trucks and about five lines for each of the tap areas. The lines crisscrossed the venue, spiraled into itself, winded around the playground, and stretched in through and out the huge tent. Groups of friends were the lucky (read: smart) ones; divvying up responsibilities and jumping in the various lines where they stocked up, cutting their wait times considerably.

Since it was just me and my friend (aka blogfather) Michael, we couldn’t cover as much ground. The first beer line I jumped in took me 30 minutes to reach the taps. This was not going to end well. With only about an hour or so left of drinking, there was no way I could salvage the day. 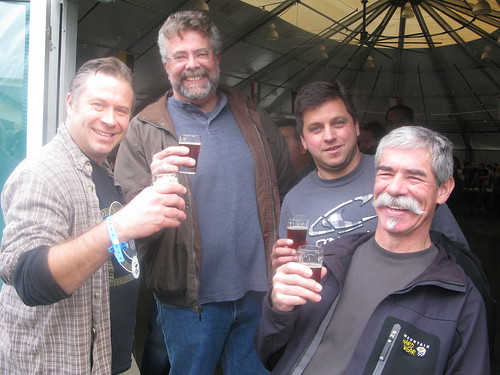 But then I met Fred…and Bill, George and Rob. These four nice guys, each RS members, had the system down. The slowest-moving lines were the ones leading to the beer truck which had 18 taps featuring the coveted Chocolate Rain, barrel-aged Coton and barrel-aged Turtle Doves. We stood in that line while Rob would jump in the faster-moving line to the Loakal Red and Workman’s Friend. By the time he reached the bar, he’d wave me over. We did this a couple of times. Yay! Thanks to them, I had three beers in 30 minutes.

At this point the Bruery staff stopped pussyfooting with just 2-ounce pours and even stopped bothering with pulling drink tickets to get the lines moving faster. Don’t know how much this helped but now I didn’t mind standing in line so much. Actually, I was just so happy to 1) be able to partake of this event and 2) get to taste all the fabulous Bruery brews.

Apparently there were some people on Twitter who grumbled about the lines at the event but when I was in line, the people around me voiced no such complaints. Rather, they talked excitedly about the beers they wanted to try. And most, like myself, made new friends with their neighbours. After all, there was nothing else to do while standing in line. 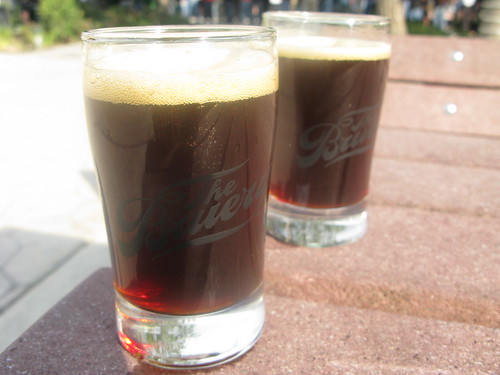 Now, I didn’t get to have as many beers as I would have liked but I did have enough to make the trip to Anaheim worth my while. Especially since it was these three:

After sobering up for a bit and a long walk back to our car, Michael and I swung by The Bruery Provisions store, the Bruery’s specialty store which sells beer, wine, cheese and souvenirs, just 3 miles away in Orange. I wanted to buy some of that good stuff I tasted to take home. But even though the store has a vast collection of beer in its refrigerator and along its wall shelves, I was disappointed to see that it only carried a very limited selection of Bruery beers. Just some of its year-round beers like Saison Rue, Rugbrod and Mischief. I could get those at Wally’s Wine in Westwood. Hmf. I should have gone to the brewery instead.

But the real draw here is the taps and the variety of beer flights. You can try the Bruery year-round flight (5 beers) for $3 and seasonal for $5 or venture over to other beer makers for the Porter Style Tasting Flight and Myriad of Malt Flight. But since we had a long drive back to West L.A. I’d have to save those flights for another time when I can secure a designated driver or a nearby motel room.