If you didn’t know better, you’d think that Biergarten in Koreatown was misplaced there on Western Avenue. I know I did when I first heard about it. After all, it’s not really a beer garden, nor do they have karaoke. While there is a selection of sake and wine, its main focus is on fine craft beer (about 20 on tap) with a variety of Korean-influenced pub grub. 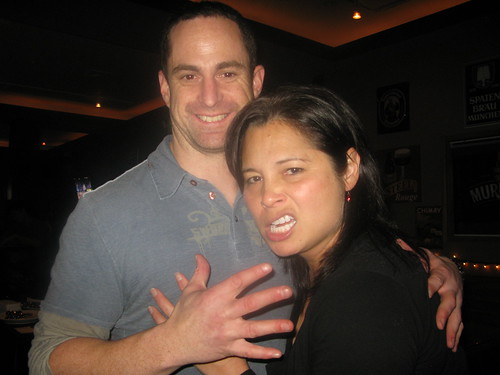 David and Jo sitting in a tree.

Suffice it to say, even in this day and age of the pop-up, color me surprised and delighted when Bastide’s former chef Joseph Mahon and bad boy sommelier David Haskell (Bin 8945) took over the unlikely location. At $56 a person for the six-course dinner, plus another $54 if you wanted to do the wine-beer-sake pairing, this was clearly not the meal for the usual clientele of Biergarten, home of the free pitcher of PBR (with any entree order).

But it definitely was the place to be for food fans and food bloggers the night I went; by the way I was comped for my meal and pairing. And since most of us were already friends, the last night of the Magnum dinner pop-up felt like a private party.

There was the world-famous Jo of My Last Bite trading naughty witticisms with Haskell. The always sunny Nguyen Tran of Starry Kitchen wearing his “LA Street Food Fest” banana costume just because. Test Kitchen regular Rydka not sporting his camera for a change. Sam Kim “expediting” behind the scenes in the kitchen. Mr. Brian Salt’s Hair making the rounds with his good buddy Brian Saltsburg and Test Kitchen’s GM, Stephane Bombet. I saw The Minty on the other side of the room and Rachel of Chicks With Knives. And EstarLA holding court with Savory Hunter and the Starry Kitchen gang.

As the night wore on and we moved through each course and each pairing, the scene got more boisterous. Friends visiting each other’s tables, peeps loving Nguyen’s banana costume a bit too much and a whole lot of hugging. 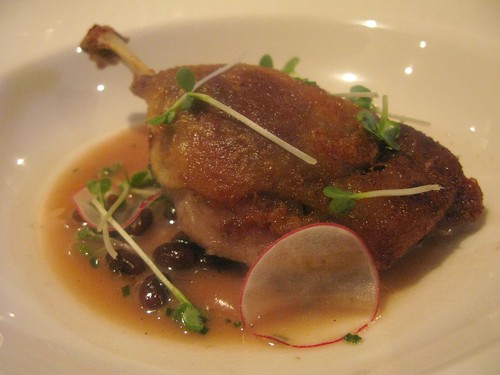 What can we say, good food and drink make us food geeks happy. (Menu with pairings)

And say what you want about David Haskell (I’m just glad to currently be on his good side), but the man is a brilliant sommelier. The standout pairing for me was the coconut soup with the sake. “It’s got some bitterness at the back of the palate. The coconut soup thickens it up and rounds it out a little bit more. There’s star anise in this and I’m going to bring out all the star anise using the tapioca,” said David. It seemed an unlikely combination and yet was so magical together, the sake enhancing the soup’s flavors and vice versa. David came out before each course to pour and explain the pairing. For a wine newb person like myself, I appreciated the schooling, plus David is a hoot.

One of the most anticipated dishes of the evening was the fried chicken with bacon, radish, arugula, celery and buttermilk dressing. Although it didn’t steal that special place in my heart reserved for Chef Ludo’s succulent fried chicken, it still managed to elicit a few mmms from the crowd, especially when paired with the 2007 G. Moulinier “Les Sigillaires”: St. Chinian, France: Syrah/Grenache/Mouvedre which David explained is meant to evoke Christmas dinner (?) as it possesses notes of blueberry which echo that in the sauce. He even broke out the good silverware. “You’ve gotta go with bling-bling with fried chicken,” he said.

The one dish I didn’t go for was the gingerbread waffle. Since I’m currently on dessert strike for December, this was a big no no. True, my dining companion, David’s publicist Eddie Allen somehow convinced me that despite that dollop of creme fraiche, this was not dessert. “It’s breakfast!” he insisted. 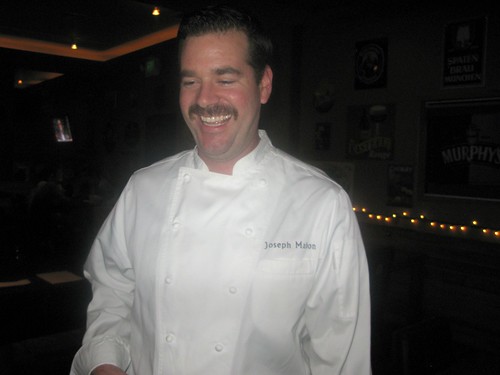 Yet after that first bite which tasted of sugared doughnuts I immediately stopped myself. OK, after the second bite I stopped myself. Very sweet and didn’t really taste of gingerbread. As for its pairing with soju, apparently this didn’t go over so well with some of the other diners. David said he chose the soju, which he realizes is an acquired taste, because he felt that the gingerbread waffle with its churro-like sponginess would cut down the alcohol in half. And to taste the waffle first and take a sip of the drink would be akin to sipping on ginger-infused soju.

In any case, I loved the daring and variety of the dinner. We went from carrot pudding to three types of meat and ended on a unique dessert, while the wine pairing strayed into beer and sake territory. I was definitely not bored and always delighted.

If you’re bummed about missing this Magnum dinner, not to fret, David says he’s working on coming up with another pop-up soonish. Currently he’s looking at Cube, The Foundary on Melrose and Eva Restaurant as potential locations.