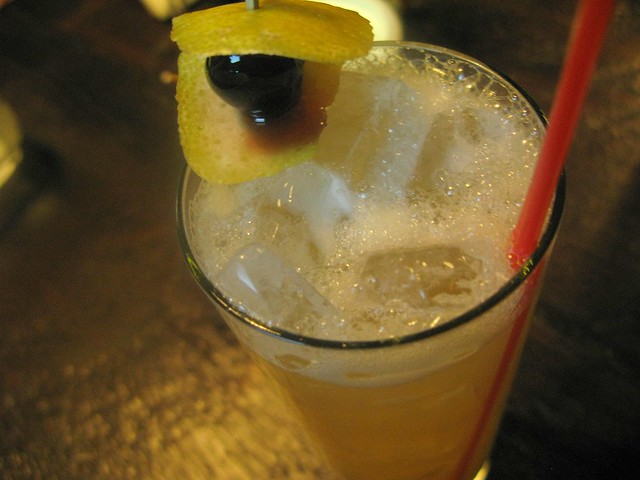 Dotto cocktail will cure what ails you, especially with all that ginger.

What is the big deal with Chef Roberto “Bobo” Ivan’s Hostaria del Piccolo, the Santa Monica sister to his Piccolo restaurant in Venice? Well, not only does the modern pizza joint offer gluten-free pie — made with naturally leavened dough comprised of kamut, soy and polenta flour — but they have a gorgeously stocked bar (specifically all the fixings for an awesome Manhattan, including the formerly scarce Rittenhouse 100) and a promising cocktail menu. 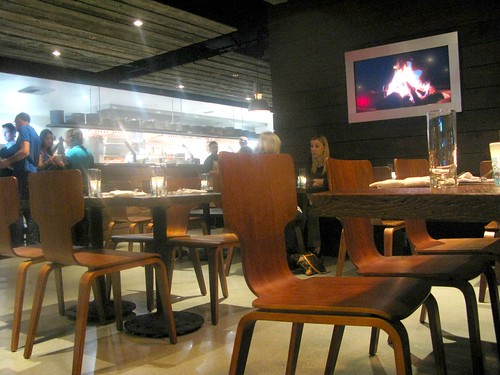 Turns out cocktail godfather Vincenzo Marianella (Providence, The Doheny), who works just down the street at cocktail fan favorite Copa d’Oro, conducted a two-day cocktail seminar and offered some input for Hostaria’s bar program. But he doesn’t want his involvement to be the focus as he said that, like he did for downtown’s Drago Centro, he’s just setting things up while Hostaria’s bartenders will be tasked with taking it from there.

At the moment there’s a decent selection of classic cocktails ($11 each) like the Negroni, Dark & Stormy and Sazerac, which oddly enough the menu lists as having cognac, bourbon and Peychaud’s bitter. Cognac and no absinthe? And their “I Sette Nani” aka seven dwarfs signature cocktails ($12 each), which Marianella didn’t name, are:

On their opening night last Wednesday, I dropped by to check out the new restaurant, lured by its cocktail menu but opted to enjoy a bit of dinner as well. 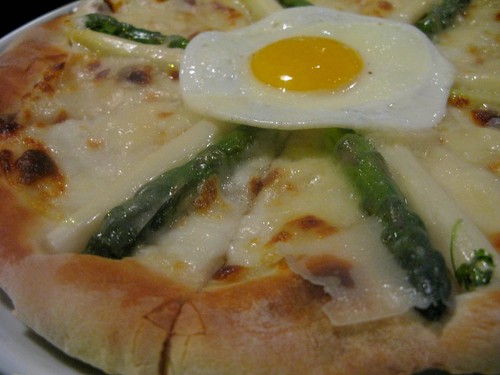 Asparagi pizza tastes as good as it looks. Drool!

The pizzas here range in price from the $12 Margherita to the $18 tuna pizza. Each are sized for either a satisfying meal per una persona or as one of many dishes to split with a date. My dinner companion and I shared the asparagi pizza ($16) — a no-sauce pie with mozzarella, asparagus, egg, Parmesan shavings and truffle salt — as well as the Verde salad made with arugula, spinach, avocado, oven-dried tomatoes, pine-nuts and Parmesan crisp. The pizza’s crust was so light and crisp; almost crackerlike. And for the first time ever, I actually finished the ends of the crust. The salad was lightly dressed, fresh and the perfect complement to the pizza.

For my dinner cocktail, I went with the Dotto. Unfortunately it wasn’t as potent as I would have liked and it was a bit heavy on the ginger syrup. But I’ll just chalk that up to the bar getting its bearings. That night bartender Roberto, who also works at Copa d’Oro, was manning the bar. He’ll be pulling double duty at both locations.

The restaurant, designed by architect Gregg Ginter, offers a variety of seating areas for its diners with a main dining room looking out at the street, a back room and a rear outdoor patio as well as the bar area. Grab a seat on the wood bench along the glass windows or cozy up to the TV fireplace.