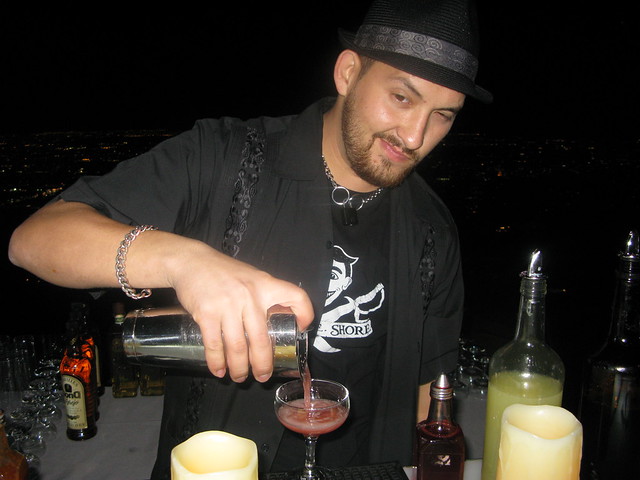 Allan Katz flirting up a daiquiri.

Five of L.A.’s top bartenders, an $18.9-million home in the Doheny Estates and a party full of willing drinkers. Such was the DonQ Holiday Mixoff at the ultimate bachelor pad, the 9,000-square-foot 2010 Esquire House, a house party venue created by the magazine featuring 11 lustworthy rooms dripping with brands like Salvatore Ferragamo and Hugo Boss, and including a “man cave” featuring high-tech gadgets and a turntable seating area. And to make sure you’ll really never want to leave the house, there’s a Heineken tap in the pool house, a Lufthansa flight simulator (best to avoid when tipsy) and a $500,000 music studio. Crazy!

But back to the cocktail contest. Throughout the house and backyard, the bartenders were set up at various bars where they had to make their signature cocktails for everyone to vote on. The guests were given two poker chips to place in the buckets of their favorite cocktails.

Here were the cocktail contenders:

I roamed around the house with drinking buddies Thirsty in LA and Savory Hunter, pondering each cocktail while at the same time fantasizing that the Esquire House was really my home (especially that closet full of designer shoes) and the Don Q party, my own fancy shindig. “But just who are all these people?”

When it came down to it, Allan Katz’s cocktails, both of them, as well as Alex Straus’ 700 Rum Punch were our stand-out favorites.  Yet it was Alex’s The Berlin and Eric’s Root for Me that ultimately garnered the most votes from the party-goers — comprised mostly of friends of the bartenders as well as liquor distributor Southern Wine & Spirits — and winning the bartenders $500 each. Congrats, you guys!

More photos of the mixoff and the recipe for Alex Straus’ winning cocktail (which would make for a tasty champagne toast at NYE) after the jump.

The Berlin
by Alex Straus, Hemingway’s

Add all ingredients (except champagne) in a shaker with ice, shake vigorously, double strain into a champagne flute, top with champagne. Garnish with a flamed orange.