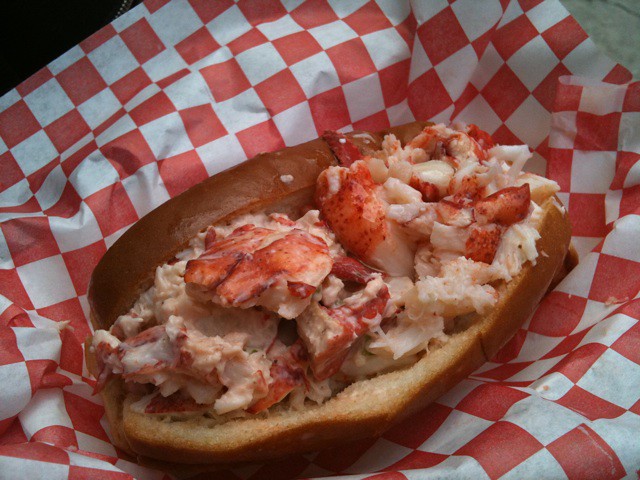 This weekend I hit up the Artisanal LA holiday shopping event where I encountered the much–buzzed–about Lobsta Truck for the first time. I was hanging out with blogger buds Lindsay of LAist and EstarLA when they decided to split a lobster roll. Problem is that they couldn’t decide whether to go with the Connecticut-style butter lobster or Maine-style mayo lobster. Fortunately the guy in the truck said that the girls had the option of trying both on a half-and-half roll, half mayo and half butter. That way EVERYone is happy. This option isn’t on the menu but they were thinking of putting it on there, he said.

Well, when I visited the Lobsta Truck during its stop in Santa Monica’s food truck alley today and asked for the half-and-half roll, the truck guy asked me if I heard about it on Twitter since they hadn’t officially put it on their menu yet. “I Tweeted it!” I replied. “Oh, that was just something we were doing for fun this weekend,” he said. Apparently this roll is a bit more involved to make but they could still do it up. And fortunately, he did it for me again. Huzzah!

The half-and-half lobster roll is definitely the way to go if you can’t make up your mind. Having said that, I think I’m a Connecticut girl. The butter was sweet and a simple complement to the lobster while the mayo just felt too heavy and saucy for me. Not that it was bad, just different. The lobster meat pieces were nice sizable chunks, succulent and fresh, and wrapped in warm New England bread. Suffice it to say, I inhaled it all.

By the way, at $11 it does make for a pricey lunch and I was still hungry afterward. But nothing wrong with a little splurge every now and then.