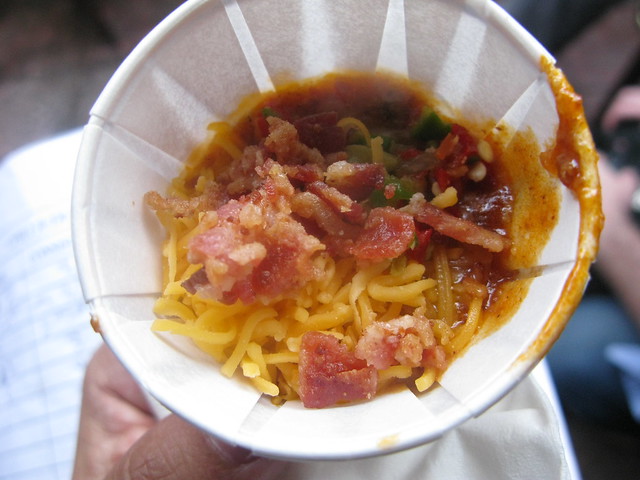 I’ve been lucky enough to be invited to judge cocktails and cupcakes contests, which makes sense, right? But this past weekend’s competition took me into completely new territory: the 2nd Annual LA Derby Dolls Chili Cookoff at La Cita downtown. No, the contestants weren’t high-falutin’ chili connoisseurs or accredited chefs but rather friends and fans of the L.A. Derby Girls. In other words, this was all for a great cause (raising money for the Derby Dolls travel team) and all in good fun. Perfect, as I don’t consider myself a chili expert but at all.

I, along with four other judges (Razor Slut of the Derby Dolls, Toxic Shakti — former skater, Carl — owner of La Cita and Thomas Refferson aka Enforcer), were sequestered in a cage in a corner of the back patio where we did a blind tasting of the 10 entries, judging it based on qualities like color, aroma, taste and aftertaste. Such a variety of chili from chocolate chipotle to meat stew. But when it came down to it, the traditional, spicy chili swayed us?and the celebrity judges who were a couple of guys from Swedish band, The Sounds. I preferred the chili with beans, some bacon, not a lot of meat, a touch of sour cream and a garnish of tortilla chips or Fritos.

Frankly there was some chili that caused us to shudder and cry for a tongue brush while others we just couldn’t get enough of. Fortunately, the judges were given unlimited drinks?you know, to help with the deliberation. I washed down the chili with a $4 margarita, a Negro Modelo and a Fat Tire Hoptoberfest.

After the judges deliberated, our scores were tallied up and Bong Jovi, head of events for the Derby Dolls, announced the top three winners. 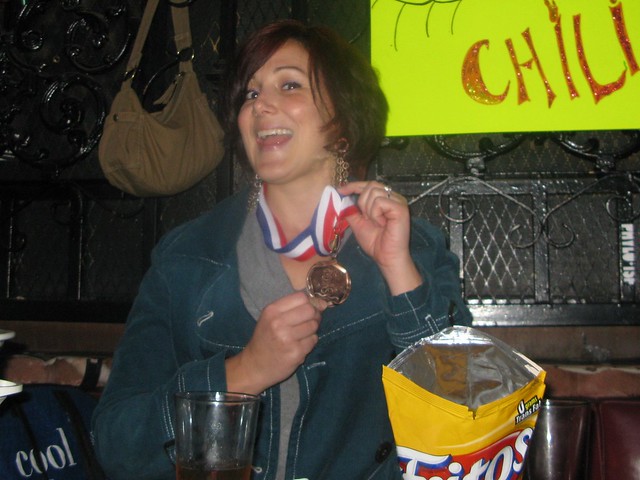 3rd place: Kammi Kazi, Derby Doll. Her chili is a variation on a Cooking Light recipe and she had just developed it the day before the cookoff. She doesn’t really like chili but said, “I like to cook and I like to win shit.” Fair enough, she won the bronze medal and couldn’t be more ecstatic. Unfortunately, by the time the winners were announced, Kami’s chili was all gone. But she did say that it involves beer-soaked jalapenos and took four hours to make. 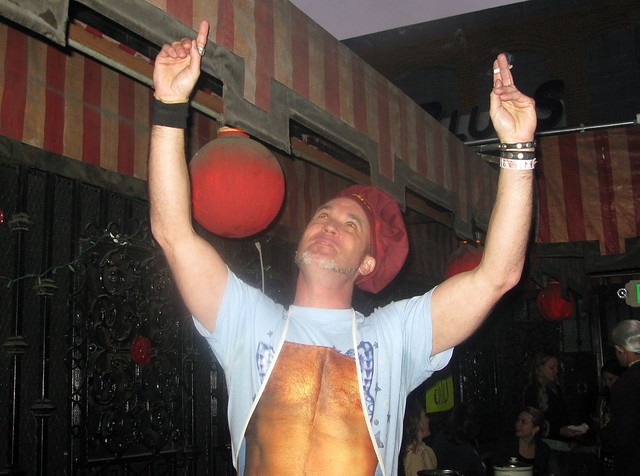 Chef Boyardouche thanks the chili gods

1st place: Chef Boyardouche, Derby Doll fan. Definitely the chili chef with the most je ne sais quoi, sporting a chef’s hat and an apron with a picture of a man’s naked chest on it. (Hasselhoff circa Baywatch?) As soon as he was announced as the winner, he blew kisses to the heavens and got down on his knees to thank the chili gods for blessing him. The man has talent. His chili had the perfect amount of heat and savoriness. “Chili has got to have some heat to it. But be soft at first and last through the end,” he said. And even after sampling 10 chili recipes, I still had to finish up with one more bowl of his chili. Amazingly, the recipe took him 6 seconds to come up with it but two days to make — a recipe involving three meats and veggies and secret ingredient spices. What besides the heat does he attribute to his chili success? “Simmering chili is key so all the tastes come together,” said Boyardouche, who apparently is part owner of Bar 107 where the LA Derby Dolls used to have their after bout parties.

Catch the L.A. Derby Dolls on Saturday, December 4. It’s the championships and their last bout of the year. VIP tickets are sold out but general admission is still available.

Video of Bong Jovi announcing the winners after the jump.