10 Things I Learned at the Absolut Sensory Experience 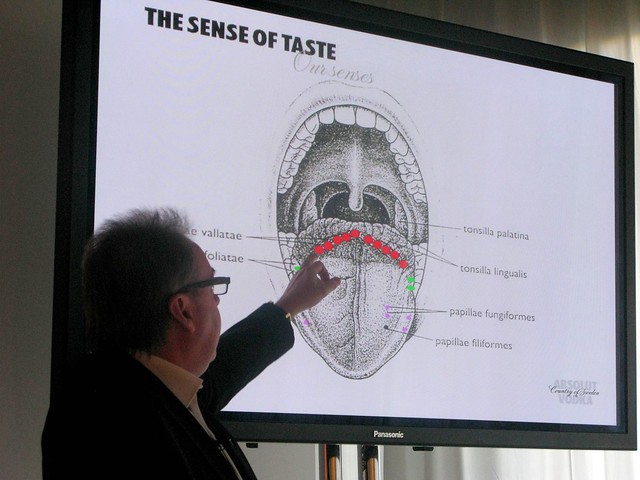 OK, I admit it. I was one of the many folks out there carrying the flag for the anti-vodka movement. What can I say? I always viewed the clear spirit as something flavorless and sort of a cheater ingredient for bartenders who don’t want to bother creating a cocktail that will actually complement the taste of the spirit. Even Simon Ford, brand ambassador for Pernod Ricard USA (Plymouth Gin, Beefeater Gin, Absolut Vodka)  said that he’s finding that vodka is facing the same uphill battle that gin had to face a few years ago.

Little did I know that Simon would change my mind. All it took was 8 hours, cocktails shaken by Imbibe! author David Wondrich, a 12-vodka tasting and an elaborate dinner by 3-star Michelin-rated chef Grant Achatz. In any case, here are about 10 things I learned at the Absolut Sensory Experience, which in turn gave me a new appreciation of (good) vodka and all the different ways to experience a cocktail.

1. We have one inherent preference when we’re born when it comes to taste: sweet!

2. You’re always sensitive to bitterness because it’s protection against poisoning.

3. One nostril is usually more active than the other where you get more detailed information from one over the other. We did an experiment where we sniffed a vial of scented air with one nostril and then with the other one and I found that my right nostril was able to pick up details of the scent that my other couldn’t. Weird!

4. How to smell a glass of wine or spirit: take the glass, sniff it and take it away from your nose while you think about it because if you sniff it too long you’ll just end up adapting to it.

5. When you reach 70, you don’t perceive aroma, taste, etc. as well as you did when you were 20. Apparently that’s why older people need more “character” in their drinks. Lots of bartenders of the room concurred with this.

6. It’s a common misconception that vodka is tasteless. Actually, there are many ways you can describe it: neutral, grainy, bready, fruity, buttery, solvent, dried fruit, diesel.

7. Russian vodkas are usually sweet because they add sugar after distillation to smoothen it up. They drink vodka so much that sweetening it up is a necessity.

8. After tasting 12 vodkas, the ones I discovered I didn’t like were Karlsson’s Gold which tastes like fish oil and possesses similar viscosity. Uluva tastes a bit corked because it uses a natural cork to seal the bottle. Tsk tsk.

9. How Alinea’s chef Grant Achatz builds a dish around white beans using a flavor bouncing technique. Basically start off with the main ingredient, then figure out which food products go with it.