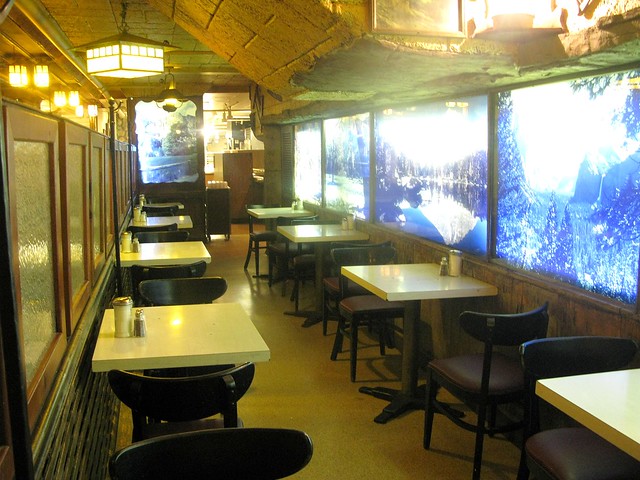 The other week I was lucky enough to not only score an exclusive interview for LA Weekly’s Squid Ink with Andrew Meieran, owner/designer of The Edison downtown, but a personal tour of all five levels of his newest conquest, the iconic downtown restaurant, Clifton’s Cafeteria. This legendary eatery has occupied that space on Broadway and 7th since 1935 and has gone from a bustling restaurant serving about 10,000 people a day to a quiet museum. The green jello is still there, as well as that one-person Redwoods sanctuary, but all that’s really left of its past glory are the pictures on the walls and the bits of artifacts.

So I felt very fortunate that Meieran was able to take me through all the photos and tell me the story about this, the largest public restaurant in the world. Tidbits he told me about Clifton’s that you probably didn’t know:

Running around the building with Meieran, I couldn’t help but appreciate his genuine fascination and respect for the old cafeteria’s history. So I’m really excited about his plans to renovate it. OK, I’m especially excited that he’s building four bars into it. But here’s a guy who is really into taking what’s been neglected from our past and making it wayyy better. Read more about what else he’s going to do with it here.