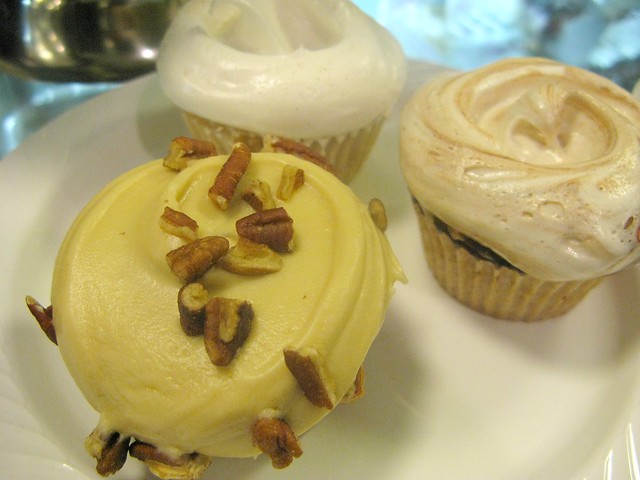 Last night, I, along with several bloggers and media types, converged on Magnolia Bakery in Mid-City for a cupcake and prosecco party which previewed the new fall flavors. It was the dessert party to end all diets as we were told that we could ask for whatever we wanted: cookie bars, mini cheesecakes, icebox cakes, specialty cakes and of course cupcakes. “Pace yourself,” the publicists warned me right before they released me to the counter. And honestly, I tried to?OK, not really, but how could I help myself? I was literally a kid in a cupcake shop.

I immediately started off with the cup of the “famous” banana pudding, made with vanilla wafers, bananas and vanilla pudding. So creamy and delicious, but I had to restrict myself to only a couple of spoonfuls, especially with the general manager, Marianne Bonner, coming at me with two plates featuring the new fall flavors. See video.

Now, I wasn’t all that enthused by the S’mores cupcake, the cupcake of the month, with honey graham cake, chocolate center and meringue icing. That honey graham cake was a bit too dry for my taste. Waah. However, I did enjoy the pumpkin spice cupcake which is a lovely autumn treat; and the orange with orange cream cupcake, a nice bit of citrus on the gloomy day, seemed to be a crowd favorite.

Surprisingly the caramel cake made me shudder. I mean, caramel is one of my favorite flavors ever. But yeah, wayyy too sweet for me in that I felt like my teeth would fall out after the first bite. Then again I had just polished off a couple of cupcakes and some banana pudding, so take that for what it’s worth

No, actually my fave flavors are still the plain jane standards, the red velvet and the chocolate. But if you’re looking for cupcakes to delight the costumed crowd at that upcoming Halloween party, I highly recommend the pumpkin spice one with its maple cream cheese frosting and toasted pecans. And you can’t go wrong with the red velvet cupcakes and the Devil’s Food cupcakes with caramel cream cheese icing either.

The specialty cupcakes are $3.25 each, while “Classics” vanilla and chocolate are $2.75 each. It’s a minimum of a dozen for advance orders. You can also get an assortment of the classic flavors in mini form for $18 in a clear container or $20 in an egg carton.

For your consideration, here’s a list of some of their other fall treats:

Also, keep an eye on their cupcake calendar for the featured flavors of the day.