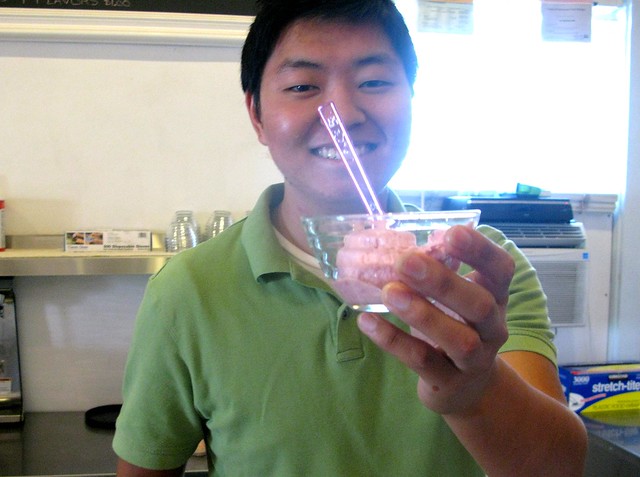 I’m so happy that more well-renown Eastside establishments are opening up shops on my side of town. First, Intelligentsia made it over to Venice and now the restaurants listed below. At this rate, I won’t have to leave my hood, ever! Eh, a girl can dream…

Bulgarini Gelato in Venice ( Summer 2011): This Altadena gelato shop which is known as the best gelato in all of Los Angeles County is planning to open up a second location in Venice! Mmm, goat’s milk gelato. N’ice Cream on Abbot Kinney will have some stiff competition.

Hungry Cat in Santa Monica (Early 2011): This seafood-focused eatery which gained popularity at its Hollywood location seems like a natural to take over the old Brass Cap spot off PCH in Santa Monica. Tourists will love its beachy location and seafood-loving locals its less-touristy surroundings to the Lobster’s off the pier. My only concern is parking around that area sucks, but at least it’s closer. And yay to another spot in SaMo to enjoy tasty cocktails.

La Guelaguetza Westside (TBD): Adorable entrepreneur Bricia Lopez has said that she plans to reopen the Westside location of La Guelaguetza. She’s taking suggestions for names on it but refuses to call it “Bricia’s.” In any case, according to the JGold, she’d like it to be an Oaxacan supper club. I’d just be happy to not have to brave dastardly Western Avenue anymore just to get to her delicious Oaxacan dishes.

Scoops Westside (Early Fall 2010): Matthew “Mattaouille” Kang has taken it upon himself to open up the Westside branch of this much loved ice cream shop. Fortunately for me (but not for my waistline), it’ll be a stone’s throw from my new apartment. He’ll offer up Tai Kim’s exotic flavors as well as have dedicated ice cream cups for regulars. He got me a huge cocktail glass. Hee! This Scoops will also have free WiFi and an Intelligentsia coffee program. Affogato, anyone?

Starry Kitchen in West LA (TBD): OK, this one seems like it’s still up in the air pending a space on Sawtelle but how amazing would that be. Admittedly I haven’t had the chance to check out SK in its downtown location but have enjoyed the bites I did manage to get my hands on like at the Eat My Blog bake sale earlier this year and the Street Food Fest.

Wurstkuche in Venice (TBD): I love this Arts District sausage-and-beer restaurant but not enough to brave downtown traffic for. Thank goodness it’s taking over the old Air Conditioned Supper Club on Lincoln. It’ll be perfect for the Anglophiles from the Santa Monica area and the craft beer loving Westside hipsters.