The Imbiber Show Podcast: Raunchy Cocktail Talk at Its Best

It was bound to happen. Larger-than-life pro drinker, booze author and spirits writer for Playboy, Dan “The Imbiber” Dunn was bound to get his own show. His personality is too big to be contained in one medium. I should know. I’m lucky enough to call him a friend…OK, Facebook friend but that counts, right?

I first met Dan last year when he designed a special wine tasting focused on Playboy bunnies. That was perhaps the most fun I’ve had at ANY wine tasting. But before that I was a big fan of his first book, Nobody Likes a Quitter. Anyone who can go on a bender and still turn in an article first thing the following morning is my hero. 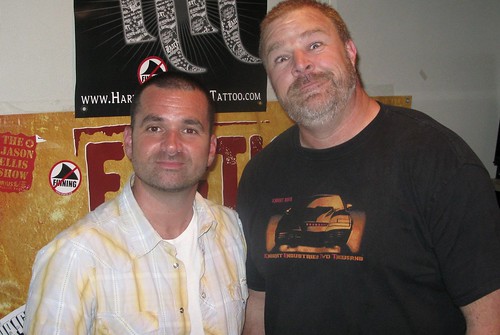 Dan Dunn and Stretch on The Imbiber Show

In any case, now he has his own podcast show, “The Imbiber Show,” on Tom Leykis’ The New Normal Network where he talks about, what else, boozing it up. The show is fairly new so it has only eight episodes so far, but what fun episodes.

Show #5 has adorable mixologists Alie and Georgia, #6 pits La Descarga‘s Steve Livigni against Death & Co’s Alex Day to decide whether LA or NYC has the best cocktail culture, #7 boasts Aidan Demarest of TDLA Liquid Assets and Pernod-Ricard’s Simon Ford talking about great cocktail bars around the world. And show #8 has me!

Dan had me come on his show to talk about dating and drinking. Sounds like a generic, been-talked-to-death topic but Dan and his sidekick, Stretch, made it good, dirty fun. In the show we covered what my first impressions are of a guy according to which drink he orders on that first date. “Cosmos signify a new bff to watch reruns of Sex and the City with.” I also give tips on how to approach that Future Ex at a bar. And we even talk about how a jukebox pick can make or break the date. “Pour Some Sugar on Me” FTW! Heh.

But definitely check it out. My episode goes up this Monday the 11th and I’ll add in a link once I get it. **UPDATE: Here’s the link to my episode.
**

Til then, enjoy this Q&A I did with Dan about his show. Leave it to him to never give a boring answer:

CoC: What’s your show’s mission statement?
Dan Dunn: Our mission is nothing less than total world domination. No, wait, maybe it’s “abomination.” Let me check. Ah, here it is… (reading)… yes, it says it right here in the manifesto that we had our undocumented immigrant intern write for us — “total world abomination.” I’m pretty sure that’s a typo. Fucking community college students!

What do you hope for your listeners to take away from your show?
Stretch. I really wish someone would take away Stretch so I don’t have to split the money or airtime anymore. He’s quite large, though, and not very easily transportable.

Do you have a dream guest, someone you would love to have on your show?
You mean, besides you? Well, the usual suspects, I guess — Gandhi, Jesus, Lou Dobbs. Oh, and Dane Cook. I’d love for him to come on the show so we could kill him.

Are you really the Imbiber or is that just a persona?
It’s a persona. In real life, I’m Lou Dobbs.

You asked me about first impressions by what a guy chooses to drink on a first date. What type of girl do you like to date? Wine drinker? Red Bull and vodka drinker?
If she can’t slam an Irish Car Bomb in under 5 seconds, she can’t ride this horse.

You can pre-order a copy of Dan’s new book, Living Loaded: Tales of Sex, Salvation, and the Pursuit of the Never-Ending Happy Hour (which comes out next February) on Amazon right now.