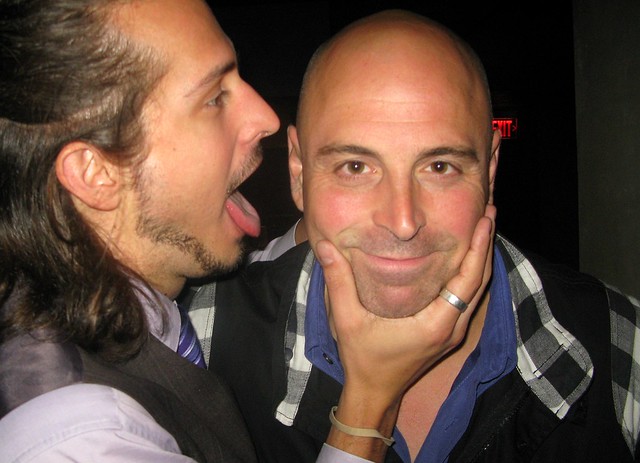 As one of the judges of the Table 20 Best LA Bartender contest, having to name just one bartender as “the best” was like Sophie’s Choice?minus the death camp. I mean, I LOVE the final contestants for different reasons. One could work a busy bar without breaking a sweat, another could turn a classic cocktail up on its head with tasty results, another could create delicious concoctions on the fly and yet another had such charisma that I never wanted to leave my barstool. But all six — Alex, Dee Ann, Devon, Joe, Matt and Max — share impressive cocktailing know-how, offer the best customer service and obviously love their craft.

I just didn’t know whom to choose. It wasn’t until I visited each bartender at their respective bars when one truly stood out for me.*

Yes, Hollywood Roosevelt Library Bar’s Matt Biancaniello, who was announced as the Table 20 winner at last night’s party, was my top pick. And here’s why.

1) Excellent customer service in adverse conditions: Granted, each of these bartenders work in popular bars with demanding clientele but Matt was really the only one who I got to “observe unobserved.”

When I visited him at his bar, during the judges’ evaluation process, he was super nice to my friends, Alie & Georgia, who had arrived before I did. Matt greeted them warmly and made sure they were taken care of even though his bar was packed with very demanding tourists. He didn’t know who these girls were and he didn’t know they were my friends, so I felt assured that he wasn’t giving them any special treatment. Suffice it to say, my friends were very impressed with him.

2) Reinventing the cocktail: Matt was the only bartender who took my standard drink order, the Manhattan, and added his own unique twist to it. Instead of just bitters he substituted Cynar which gave it a stronger kick and consequently ruined me for all other Manhattans. After a sip of Matt’s version, the regular Manhattan seemed so plain, too sweet and watered down. He also created this special 2-fer cocktail called “Mad Man” ($15) which is comprised of an Old Fashioned and a Sazerac in a Jagermeister glass. The two cocktails are separated by a brandied cherry. Genius!

3) Expanding the customer’s horizons: After I told him very plainly that I don’t like Cynar, despite its delightful transformation of the Manhattan, he took that as a challenge and made me a Cynar-based cocktail with cassis and passionfruit. But truth be told, even though it was delish on that first sip, its bitter finish reaffirmed my opinion of the artichoke liqueur. But, thanks for trying, Matt!

In addition to all that, one can’t deny his high energy, attentiveness, creativity and affability. All wins. Now if only the parking situation for the Library Bar was better (read: cheaper)!

Anyway, big congrats to Matt, and to all the other contestants. Without you fine folks, my life would be a little empty.

_* Due to time constraints, unfortunately I wasn’t able to visit Max and Alex. But Trevor, Table 20 contest organizer, assured me that didn’t count against them in the voting process._