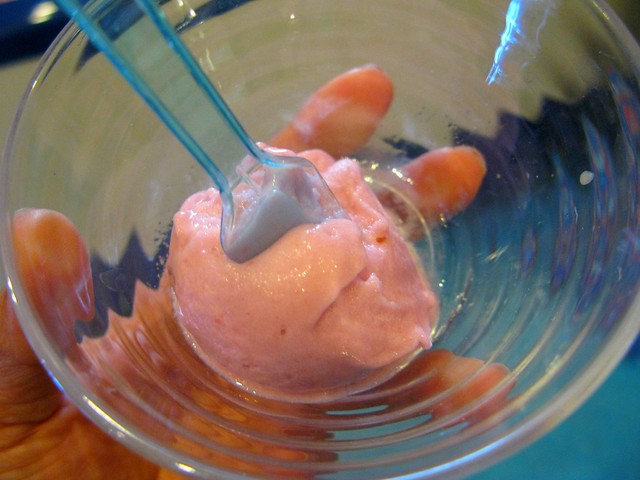 You know what sounds uber refreshing right about now in the midst of this hellacious hellfire that we call September in LA? Beer and ice cream! And I’m not talking beer floats, but actual ice cream that is beer flavored. Unfortunately you’ll have to put that craving on hold until LA Beer Week in a couple of weeks when Tai Kim, owner of Scoops Ice Cream, debuts his beer ice cream, all made from artisan beer!

But I can give you a preview of what you have to look forward to. This past weekend, I was invited by Food GPS and Scoops to a sneaky peek of the unique flavors and we even got an exclusive look behind the curtain, so to speak, of how Tai makes his fabulously yummy ice cream.

Here’s some video breaking down Tai’s process into three steps.

1) Mix flavor components together and pour it into the ice cream maker.

2) After about 10-15 minutes pour more beer into the machine.

3) After 15-20 minutes scoops the finished ice cream into the tub.

In case you wondered, each tub of beer ice cream contains a 16-ounce bottle of beer. So, no, you can’t get drunk off it. “Asking how much ice cream one has to eat to get drunk is like asking how many poppy seeds one has to eat to get the same effects as heroine,” said Josh. And when I had some ice cream, I couldn’t really taste the actual beer itself. Out of the seven flavors we sampled, I could only really get a sense of beer from the Unibrou Quelque Chose cherry which tasted almost fizzy. 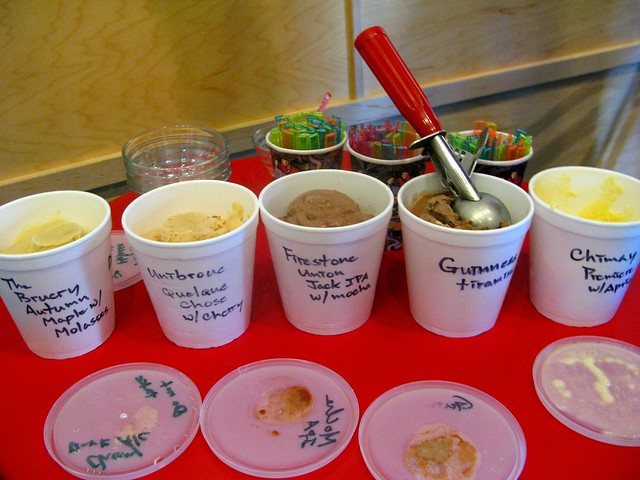 The Guinness Tiramisu, which I was excited about, only tasted like chocolate. The Chimay Apricot only really tasted like apricot. And that yummy-sounding Framboise Pear was only raspberries and pear. Not that they were bad-tasting ice cream, they just weren’t especially beery. However, the Firestone Union Jack IPA Mocha did have a bit of a bite but it was very subtle.

Out of all the test batches, I’d have to say that my favorites were the Bruery Autumn Maple Molasses and the Lost Coast Tangerine Wheat Ale Hazelnut. I really hope they make it to the actual premiere on October 11. And even if for some strange reason they don’t, you still can’t go wrong with any of Tai Kim’s Scoops ice cream. You have to try his wasabi-coconut one!

By the way, I highly recommend buying the corresponding beer to go with the beer ice cream, both to be enjoyed at home of course. Drinking that beer with it just brings out the flavor more.

The beer ice creams debut on Monday, October 11 at 7pm and will be available through October 17.

In other beer-ice cream news: Food GPS will also be conducting Beer Float Showdown II for LA Beer Week on October 10! This time, instead of just two bars, we’ve got four: Boneyard Bistro, Ladyface Alehouse, Simmzy?s and Tony?s Darts Away. Tickets are $25 online/$30 at the door and everyone in attendance gets to taste and vote on their favorite beer float. 50% of the proceeds will go to Share Our Strength, a nonprofit that works to end childhood hunger.