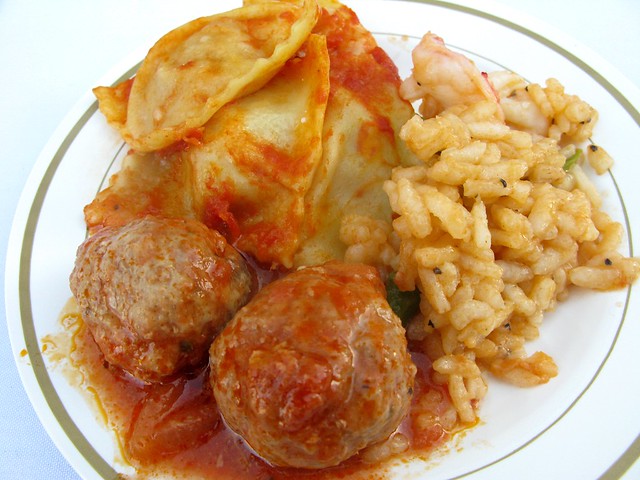 I’m still floating. This past Saturday’s 28th American Wine & Food Festival at Universal Studios Back Lot was an orgasmic food-wine-booze fantasy from which I never wanted to wake up. Every year I look forward to going because as I had said before, it is the mutha of all food festivals and if I had to go to only one food fest a year, I’d pray it would be this one. Is that over the top? The grand scale of it, the layout, the venue, the renowned chefs, the vast variety of wineries, and all that food! Come on! 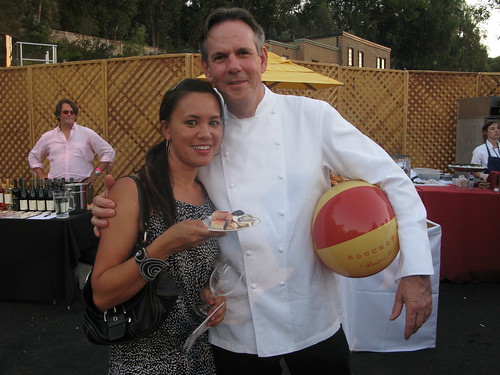 Me and Thomas Keller of Bouchon

But this year, to make the most of my time there, I got organized. On the tram ride up to the event, instead of enjoying the studio tour as usual I went through the event map and marked off the locations of all the chefs and wineries I wanted to visit. The game plan was to check out the must-see chefs first, gorge myself and then spend the rest of the evening grazing, strolling and sipping wine. Suffice it to say, it was a huge success.

With the sun still in the sky when I arrived there at 6, I was able to shoot pictures of all the yummy noms I had and even of the chefs before they got all flustered and busy.

Chef Gino Angelini of Angelini Osteria wouldn’t stop long enough to pose for pictures but I got to chat with Joe Miller of Joe’s Restaurant about his refreshing heirloom tomato with gazpacho sorbet and sneak under Thomas Keller’s arm while he was playing with a Bouchon beach ball. 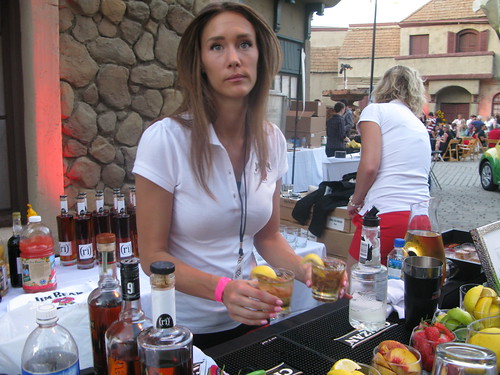 Even though I had a list of suggested wineries to try, I stuck to cocktails. Unfortunately I found only a couple of decent ones here. It would be cool, and make a lot more sense, if AWFF started featuring well-known bartenders alongside the famous chefs. As it was, the cocktails here were made by very pretty girls with very limp shakes.

But the bartender for (ri)1 whiskey looked as if she just got word that her puppy was run over. “I really worry about her,” said my fest companion Lindsay of LAist. “How is she going to make it through the rest of the night?” The woman just would not crack a smile, let alone respond to any questions or banter we tried to initiate AND she did the slowest cocktail shake I’ve ever seen. Eesh. Fortunately, that didn’t spoil our high spirits for too long.

We moved on to the lounge for the new Cosmopolitan Hotel, Resort Casino, Condos opening up in Vegas soon (grand opening on New Year’s Eve). There they were not only offering a couple of tasty-sounding cocktails to enjoy in their 46-people-capacity upstairs lounge but an iPad virtual tour of the new hotel and casino. Apparently Cosmopolitan is one of the only (?) casinos in Vegas with actual windows so you can see outside. The cocktails in the lounge were a variation of a Moscow Mule with Ultimat Vodka, hot ginger syrup, ginger beer and Angostura bitters and the Libertine, with Maker’s Mark, lemon juice, orange marmalade, rosemary and maple syrup foam. 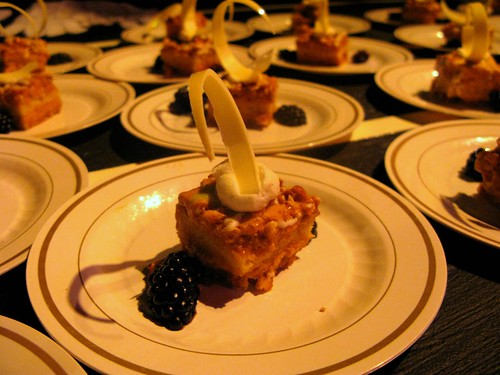 Lindsay and I grabbed the Mules and headed upstairs to survey the festival and plot out our next moves. The restaurant booths near the Cosmopolitan Lounge were actually the ones that will appear at the new hotel. So yes, you can look forward to seeing Comme Ca, Blue Ribbon Sushi, Holsteins and STK in Vegas.

The lines during the festival itself weren’t too bad in the initial hours but when the dinner crowd rolled in, it became too much of a bother to stand in the lines for ice cream and cocktails.

And when I was determined to wait in line for the Ultimat Blueberry Freeze I was greatly disappointed by a watered-down drink that vaguely tasted of fruit punch with nary a trace of booze. Bew. No worries, though. Just set it down and walked up to the tables for Inception and Au Bon Climat wineries. Mmm, Pinot Noir.

At 8:30, we hit Sherry Yard’s Sweet Sanctuary Champagne and Port Lounge, which was packed with festival-goers looking for a sweet nightcap. A live band played tunes that everyone could groove to on the dancefloor. Lindsay and I grabbed a couple of glasses of port, some Payard chocolates and a table off to the side to people watch. “Who comes here to dance? And how can they dance after eating all that?” Lindsay asked me as we witnessed several examples of the White Man Overbite.

But then not two seconds later, she said that she, too, wanted to dance. Fueled by the drink, I joined her in bringing sexy back, and we probably worked off most of the 6,000 calories we had that day.

Highlights of the evening: