All About Andy: The Warholian Exhibit at Royal/T Cafe 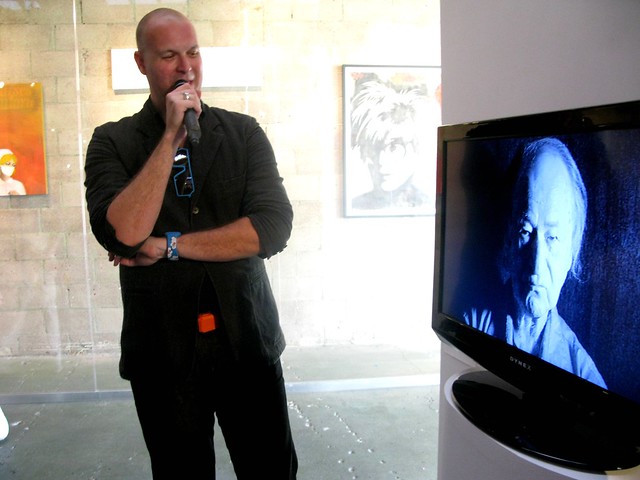 Last night was the press preview party for The Warholian, the new all-things-Andy-Warhol art exhibit at Royal/T Café in Culver City. Sponsored by Barbie — yes, the doll — and featuring tastes of limited edition “Tribute to Warhol” Dom Perignon champagne (normally $50 a glass!), how could I say no? Add to that the exhibit, with fun Warhol-inspired art work and actual Andy art, which was curated by Eric Shiner, The Milton Fine Curator of Art at the Andy Warhol Museum, and we had a colorful, arty night out. 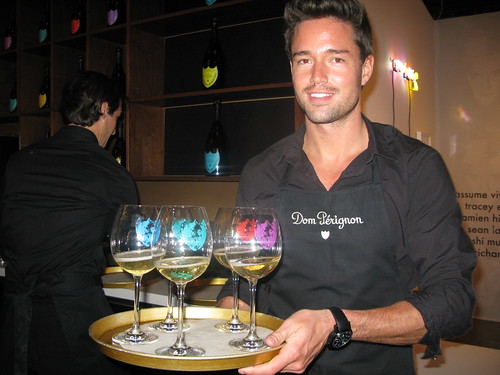 Andy would have liked him.

During the party, Eric Shiner took us on a tour of the exhibit (click here for list of works), adding in interesting factoids about the elusive, wig-wearing artist. For instance, amazingly Warhol never did drugs or drank. Rather he made sure his entourage had plenty of that naughty stuff on hand so while they got faded he could just sit back and observe their antics while stone sober. And apparently Andy was devoutly religious, going to church nearly every day. For some reason I can’t imagine him praying in a pew.

Among the iconic Warhol pieces on display behind the glass cases, you’ll find that famous “Marilyn” and “Dollar Sign,” each one surrounded and complimented by Warhol-esque works by great artists like Jeff Koons, Takashi Murakami and Richard Prince. This exhibit asserts the notion that every piece of art work is touched by a little Warhol.

My favorite piece here includes the screen test video of the original subjects of Warhol’s series of film portraits filmed 45 years later. Interesting to see how these beautiful people with “star quality” have aged. 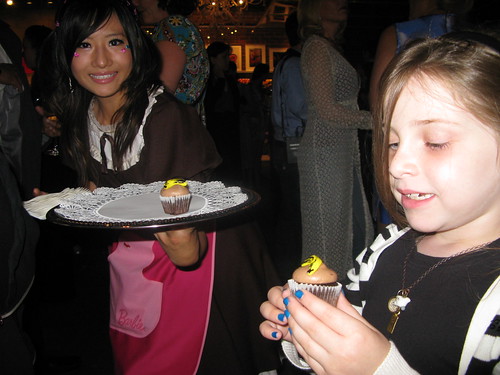 Andy for all ages.

Besides the Warhol, I loved the Barbie dreamhouses display in the redesigned café store. I got to visit with the townhouse that made me so jealous of my little sister when she got it for her 7th birthday, as well as the much coveted Barbie Dreamhouse from 1978 and even the more recent three-story pink townhouse from 2009.

All very pretty, but since I am too grown-up now and lacking an imagination to play with dolls, I was OK with just admiring them from the other side of the glass.

During this exhibit, you’ll get to drink, eat and wear Andy. The café has a special menu with Warhol-named everything, from salads to high tea:

Designer Lisa Perry also opened up a pop-up Pop Art store showcasing her mod fashions adorned by Andy art as well as some Lichtenstein. The items here are only a small representation of her larger collection which can be viewed online.

The Warholian exhibit is free and open to the public starting today through January 31, 2011.