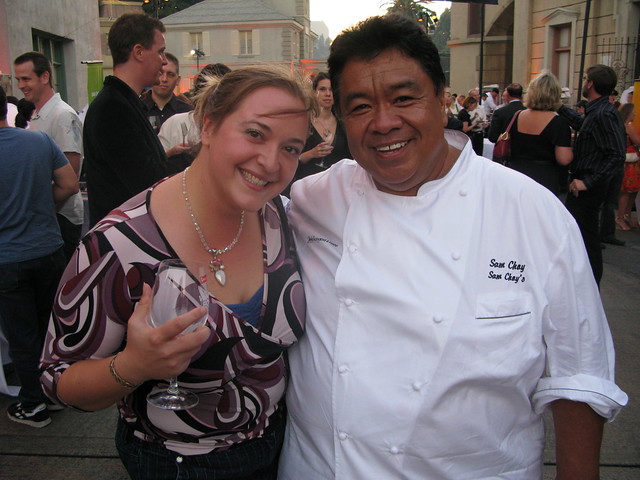 Now usually I shy away from posting events with high-priced tickets on my blog because first and foremost, I’m a cheapskate. But next week’s Wolfgang Puck’s 28th Annual American Wine & Food Festival is really THE food festival you (and I) should have been saving up your (my) money for. It’s the mutha of LA food festivals.

Every year this foodie/wino’s paradise takes place at the Universal Studios Backlot where you can stroll “New York” streets, enjoying the live bands sprinkled throughout and peruse and partake of all the different wineries and restaurants.

And this year’s event will include renowned chefs like Thomas Keller of Bouchon, David Myers of Comme Ca, Nancy Silverton of Osteria Mozza and Pizzeria Mozza and Charles Phan of the Slanted Door in San Francisco to name but a mere few. While wineries in attendance will include Laetitia Winery, Malibu Family Wines, Qupe and more. And for after-hours, there will be Sherry Yard?s Sweet Sanctuary Champagne and Port Lounge for sipping and dancing.

Tickets for this event, which takes place Saturday, September 25, are $300 (plus processing fee) and proceeds go to benefit Meals on Wheels Programs of LA, which AWFF has been raising money for since 1982.

If you’d really like to splurge on VIP tickets, moneybags, I’d recommend going for the $1,000 Festival Friends package which gets you and your guest early admission at 4:30pm to see Wolfgang Puck’s cooking demonstration and festival table reservations. So that would be about $500 a person. ****

I’ve been to many food festivals and I have yet to experience anything like this one. Maybe it’s because it’s mostly at night instead of the daytime so everyone is in their evening finery and the event lighting makes you feel like you’re on stage. Or maybe it’s the setting of being in another city. Whatever the case, it really shouldn’t be missed, and that’s why I had included it in my LA Bucket List (#99).