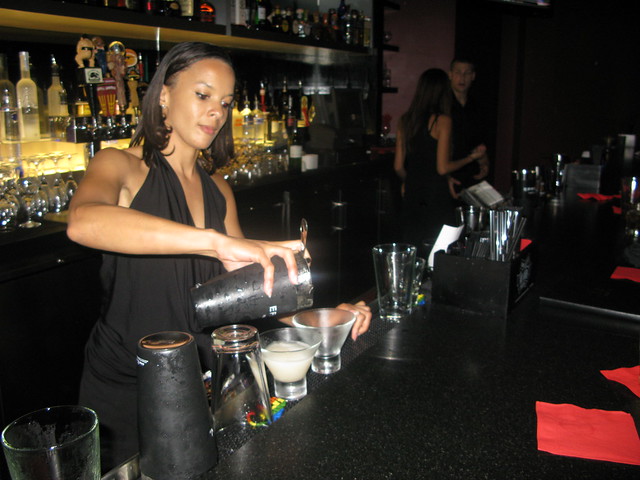 Last Friday, local bloggers, myself included, were invited to check out the cocktails and hand-made dim sum at Xino (Sign-Oh), executive chef Chris Yeo’s Chinese restaurant that debuted last month with the newly renovated Santa Monica Mall and Dining Deck. We started off in the bar/lounge area and then were moved onto the outdoor patio overlooking Third Street Promenade.

Although it was fun hanging out with the restaurant’s PR crew as well as my blogger friends, I just wasn’t feeling this place. Sure, I didn’t get to taste all the appetizers since they didn’t come out all that often, leaving everyone to pounce on the passed plates that did eventually show up, but what I did taste was just OK. For one, the Kung Pao Chicken Lollipops were too saucy and mostly gristly. Everything else was forgettable. Some of the other bloggers were still so hungry that they just ordered their own dishes off the menu, while most of us opted to seek sustenance elsewhere after leaving the party.

As for the cocktails, way too sugary for my taste. But then again, maybe the mall patrons and the tourists will think they’re fun. I had even picked what I thought would be the least sweet drink on the menu, a Mulan cocktail made with Tanqueray Gin, basil syrup, lemon, St Germaine Elderflower Liqueur, and rose water. But it ended up tasting more of sugar and St. Germaine than anything. Don’t know how considering the ingredients, unless “basil syrup” is really “basil simple syrup.” I remembered that the cocktail we were offered during the Dining Deck press preview was also very sugary but was hoping that was an anomaly.

In any case, not the place for me. But if you are into a clubby Chinese restaurant, you might want to grab one of the cabanas on the outdoor patio. Just FYI, happy hour is from 4-7pm on the deck and in the lounge and they also have Late Night Dim Sum which starts at 11pm and ends at 2am.