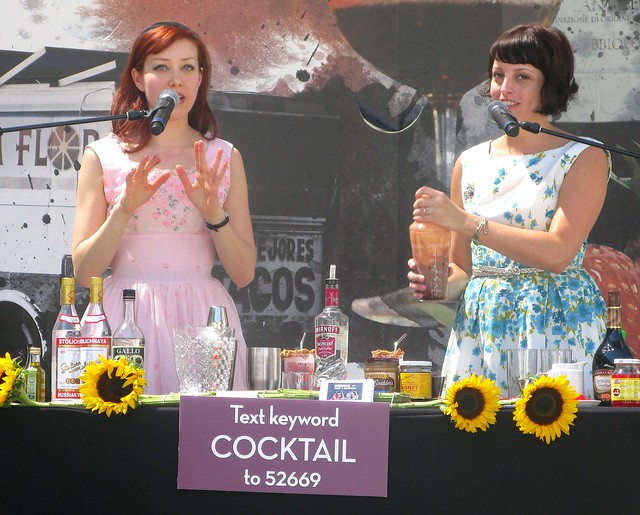 You’ve probably heard of Alie & Georgia before. They’re the Los Angeles cocktail vloggers, Alie Ward (LA Times staff writer) and Georgia Hardstark (journalist/blogger), who in 2009 created the McNuggetini and a how-to video to go with it. Now, personally I thought this cocktail, which involves a chocolate milkshake and barbecue sauce, sounded erptastic but their video won me over. How cute are they? What with the banter and purty sundresses.  It’s like hanging out with your too-cute friends as they experiment in the kitchen. So when I heard that they were going to be doing a demo at the Los Angeles Times Celebration of Food and Wine this past Sunday, I had to check them out. 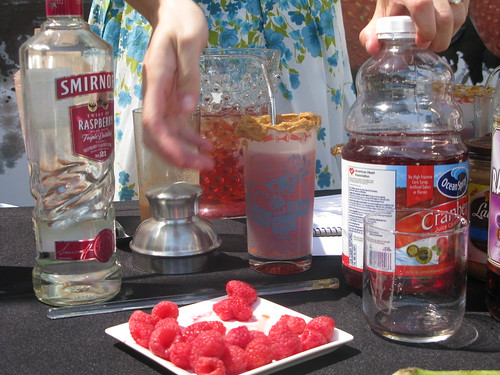 Under the oppressive sun on the Paramount Studios lot, I watched them mix three of their unusual creations: Umami Up, Peanut Butter & Jealous and the Chocolate Cherry Bomb. The Umami cocktail was described as something best enjoyed as an aperitif and definitely something you wouldn’t drink on a first date due to its pungent odor. Alie even had a box of Altoids on hand to offer a curiously strong chaser to those daring enough to sample the garlic-infused concoction.

The Peanut Butter & Jealous was a mix of vodka and cranberry juice muddled with raspberries and served in a peanut butter-rimmed glass. Sounded fun and it looked like the perfect drink for stylish moms on a play date; they can sip on this and make their rug rats jealous. (Here’s the video of the recipe via Food2.com.)

The only cocktail I had the chance to grab at in the mad rush to the stage at the end of the demo was the Chocolate Cherry Bomb, a fiery but sweet drink composed of chocolate, spicy vodka, Sriracha sauce and a garnish of chili pepper and pepper-infused cherry. OK, now to be honest, this smelled like garbage left out in the hot sun for three days but once I got past the smell it tasted all right. Spicy, sweet. The only thing was that I couldn’t get past the smell on the third sip.

But I have to give those girls an A for effort, creativity and style. Heaven knows, it’s a nice change of pace from the vests-and-bowtie mixology in cocktail-serious bars around town. Not that I’m hating on those, because you know I love them. But as the girls said at their demo to stay-at-home bartenders, “Never get intimidated by mixology. It’s fun and risky. Don’t go too high brow, have fun.” It’s nice to be reminded about that. Hmm, now how would one go about making a mac and cheese cocktail?

And even their suggestions for where to get your booze and mixers are down-to-earth: Rite Aid apparently “has the craziest deals” and Galco’s Soda Shop is awesome for its wide selection of vintage sodas.

If you want to learn more Alie & Georgia recipes, fortunately for you they are kicking off a new cocktail Web series called “Drinks With Alie & Georgia” on Food2.com, a Scripps-owned food site, on this coming Monday, September 13. Click here for a list of their episodes.

That same night the girls will be guest bartending at Cha Cha Lounge (where they first met, aww) in Silver Lake from 7 to 9pm. This will be a weekly gig to coincide with the release of each of their videos. So see it on the Web first and then head over to Cha Cha to taste it IRL.

If you’d like to try one of their cocktails out now, I was able to get a copy of their Zombie Gut Punch. Yes, the name alone sounds disgusting but I love zombies so here it is after the jump. Fortunately this doesn’t involve any guts garnish.

In a large punch bowl filled with ice, pour vodka, triple sec, bitters, blood orange juice and black cherry soda.  Laugh as though you are an evil zombie and stir. Rim each glass with grenadine before filling with punch mixture, and serve. Stagger around menacingly, and threaten to eat strangers’ brains.