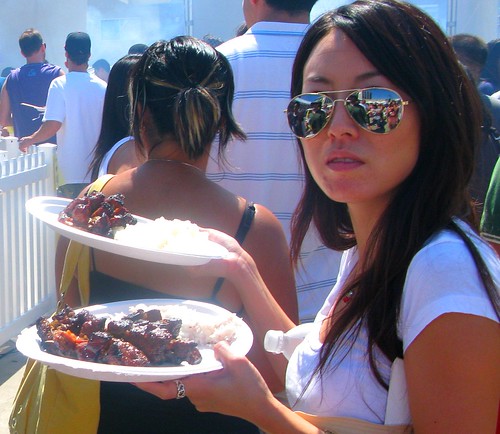 And, no, you’re not just going to stand there watching Ludo and JGold lick the barbecue sauce off their fingers. You, too, will get to try out the grilled offerings at $5 a plate (vouchers must be purchased at the event with cash only). Plus there will also be an eating contest (secret ingredient to be announced), a beer garden, and thankfully vendors to cool you down like** Scoops ice cream, Coolhaus ice cream truck and Sprinkles Cupcakes.**

For cocktail fans, the special bonus is that this year will feature a soju cocktail competition where L.A. bartenders will compete to make the best Koreatown-inspired drink. Hmm, what might those taste like? I’d tell you but the cocktail recipes are kept confidential until the event.

However, I will tell you that the competitors include Fred Warner of La Buca (formerly of The Association), Josh Goldman (formerly of the The Dining Room), Daniel Eun of The Varnish, Joel Black (formerly of Comme Ca) and Jameson Rhyme of Bottega Louie. Who will you root for?

The guy with the best KTown cocktail-making skills will win $300 and a $100 kbbq gift card and their cocktail will be featured at the KBBQ after party at Cafe Bleu for you to enjoy from 8pm to close.

In any case, this is definitely a summer event not to be missed. What could be better than ‘cue on a hot day? Just make sure to pack lots of Wet Naps.**
**