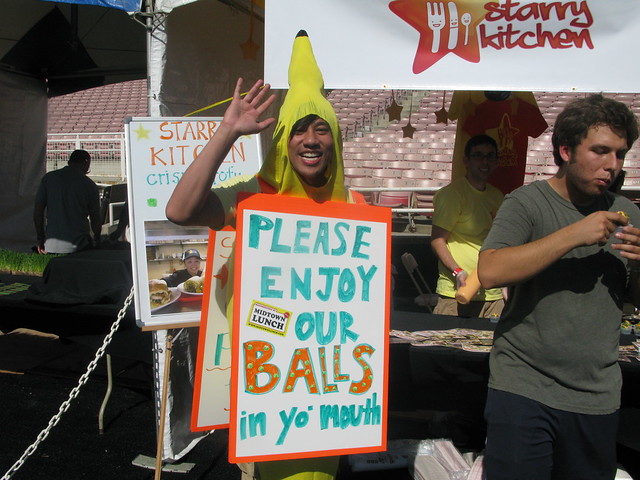 Nguyen Tran of Starry Kitchen sporting a banana costume and a big smile.

Back in February of this year, the first LA Street Food Fest took place: 30 food trucks, a donation-based cash beer and wine bar and over 10,000 attendees. Suffice it to say, a lot of the food truck fans in attendance weren’t happy, complaining of lonnng, slowww-moving lines and a too-small venue. But being the savvy business woman that she is, co-founder of the event, Shawna Dawson didn’t get defensive, but rather she listened.

This past Saturday’s LA Street Food Fest Summer Tasting Event not only took place in a wayyy larger venue, the Rose Bowl in Pasadena, but restricted attendance to 5,000 and organized the food trucks by placing them in space-saving booths. There was also now room for two beer gardens, an ice cream social, live music as well as a tequila bar and a rum bar. And even the 85-degree day was taken into consideration as tents were placed on the bleachers in the Bowl so attendees could take refuge from the oppressive sun. Add to that that general admission was $45 and included EVERYthing and this was a cheapskate foodie’s paradise.

I was lucky enough to be one of four bloggers chosen by Shawna to do an hour of live Tweeting at the event so I not only got VIP access to the event but sat in the press box overlooking the Bowl while scouring Twitter for interesting Tweets from the attendees. But cooler still was not having to wait in long lines for the drinks.

Unfortunately I spent more time getting drinks in that VIP hour and not enough time making a run for the more popular food trucks like Grilled Cheese Truck and Manila Machine. By the time I realized I should eat, those lines were already intimidatingly long. So I just jumped in manageable lines like the ones for Dogtown Dogs, Fresh Fries, Komodo, Pal Cabron, Starry Kitchen and Tamales Elena. Was not disappointed at all.

If I paid for my entry, I probably would have been more persistent in trying to get to the more popular trucks but as it was I was just hungry and wanted to get as many tasting-size portions as I could in my belly. My plan worked as I was full by the time my shift started at 6. Huzzah!

Highlights of the day include:

I had SO. Much. Fun at this food fest, but I realize my experience might have been unique. What did you think of the event?