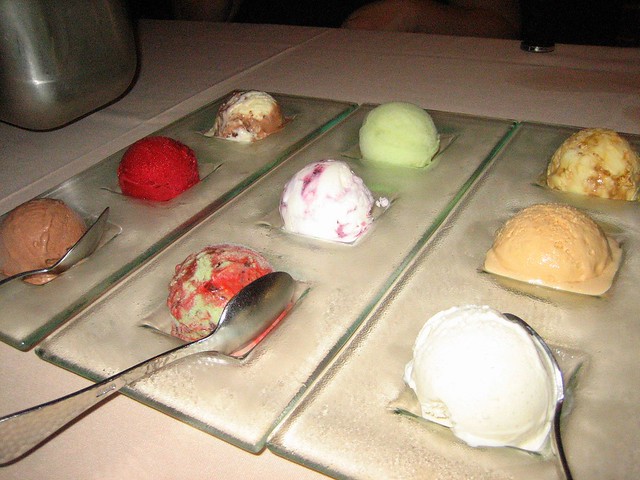 As a fan of ice cream and a huuuge fan of Scoops, there’s not much more you can surprise me with in terms of how my favorite frozen treat is served or the flavors it’s offered in. I’ve had it in beer, fried, nitrogenated and foie gras flavored. So, yes, when I was invited to the beer and ice cream social at Rosa Mexicano in Downtown to check out the restaurant’s annual ice cream festival, “Festival de Helados,” I admit it, I shrugged. But once I actually read the flavors being offered at this little media party I rsvp’d asap.

The festival, which celebrates the flavors of Mexico, runs through August 1 and til then you can choose from 7 ice creams and 3 sorbets (farmed out from Milk Ice Cream Shop on Beverly Boulevard), 6 house-made toppings and 3 ice cream desserts. Think of all the flavor combination possibilities! But at this social they were making some special off-the-menu beer floats (about $8 each) which paired whatever ice cream flavor we wanted with either the Modelo Especiale (light) or the Negro Modelo (dark) beers.

FYI, there are other beers available — Corona, Dos Equis, Pacifico, Tecate — but Chef John England felt that the Modelo brews would pair with the ice cream the best. And he was right. The Especiale was perfect with the pucker-inducing tomatillo-lime sorbet, soothing away that tartiness as it would with a lime wedge. The richer Negro paired awesomely with the Mexican chocolate as well as the cinnamon chocolate cookies and cream.

Naturally, there were some flavors on the menu that I wasn’t exactly over the moon about, like the astringent hibiscus pomegranate sorbet and the Mexican chocolate and the blueberry crema which were just OK, not really standing out for me. But I did find the creamy and caramelly sea salted cajeta and the unusual sweet corn and caramel popcorn intriguing. However, my ultimate favorite had to be the pomegranate mint fudge swirl which offered an unusual flavor combination that actually worked here. I thought that the pomegranate and mint would meld together in a cough syrupy taste sensation but it was actually pretty mellow enough where I could still enjoy the chocolate chips. Yummy! I don’t think I’d douse beer on this one though.

If you’d like to try these unusual, festive flavors, you better get thee to Rosa Mexicano right quick before the festival ends in a couple weeks as none of these ice creams and sorbets will be carried over onto the regular menu. Not that the regular menu isn’t worth looking at, after all it has flavors like Mexican chocolate mole sorbet, prickly pear and blueberry sorbet and coffee-Kahlua. Mmm!

UPDATE: Rosa Mexicano decided to keep the pomegranate mint fudge swirl on the regular menu post-festival! Nope, I didn’t have anything to do with that. Apparently every year there is usually one flavor that stays on as it’s the most popular, and this time it was the pom-mint so after this past Saturday’s cooking demo the chefs decided to keep it. Yay!

Hit the jump for the festival menu…