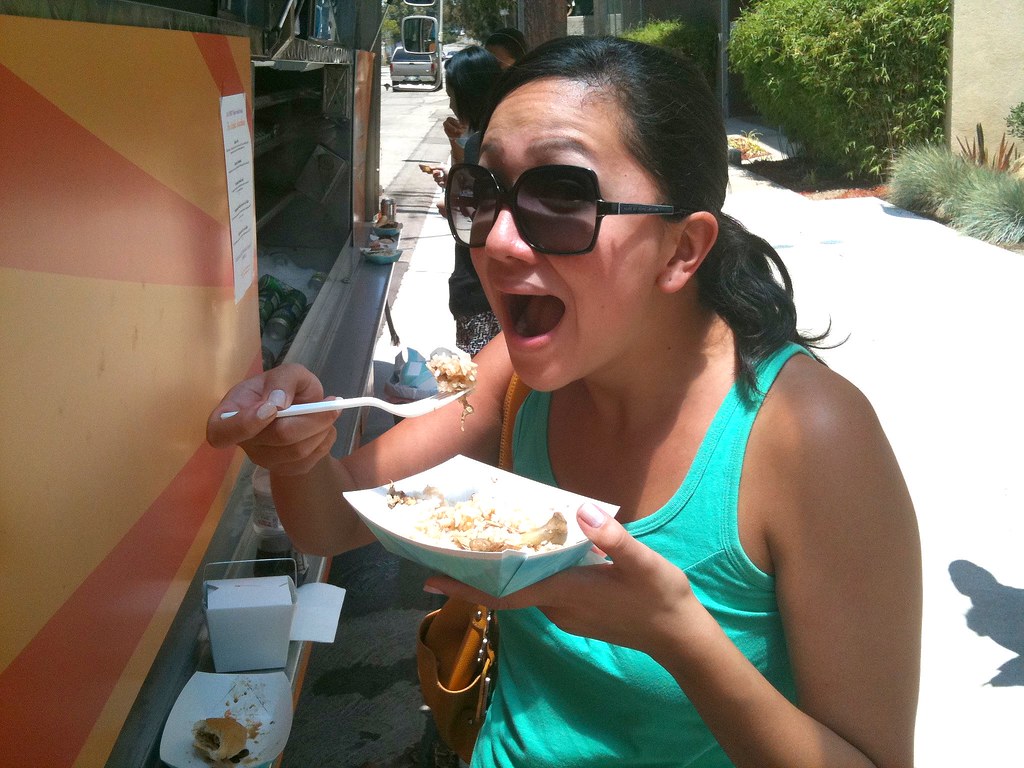 I finally had my first Manila Machine Filipino food truck experience last week after what seemed like weeks of near misses. Nastassia Johnson, co-founder of L.A.’s first Filipino food truck and the talented baker/blogger of Let Me Eat Cake, did give me a taste of the fare via her ube cupcakes that she sold at the Eat My Blog bake sale, but I wanted MORE! Fortunately the cupcakes (recipe here) are also sold at the truck. But unfortunately, they tend to sell out pretty quickly. 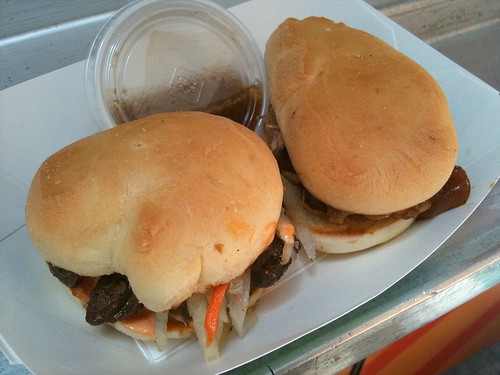 First thing’s first, full disclosure: I’m Filipino so I have a soft spot for the Manila Machine. I love that Nastassia and her food truck partner, Marvin Gapultos of blog Burnt Lumpia, are opening up Angelenos’ eyes and palates to Filipino food — a cuisine influenced by Spanish, Chinese and other cultures. As it is our cuisine hasn’t really been accepted in mainstream America. But now hopefully everyone else will discover the joys of chicken adobo — chicken marinated in soy, garlic and vinegar.

So when Nastassia tweeted that the truck would be at T Lofts in West L.A. near my day job, I jumped on my Vespa and scooted on over. I timed it just right by showing up an hour before they were scheduled to leave because there were zero lines by then. Compared to when the truck first opened its windows to the awaiting masses.

Nastassia was manning the pickup window while her boyfriend was taking the orders. Her regular chef had flaked out for the day so it was a family affair with her brother and Marvin doing the cooking.

As much as I was curious to taste the chicken adobo dish I instead got the Original Manila Dip — two sliders on pan de sal and served with adobo dipping sauce. One slider was shredded chicken adobo with caramelized onions and the other beef marinated in sweet calmansi. For good measure, I also ordered up a couple of lumpia (pork egg rolls) and the turon (banana lumpia). All that for $10. Everything is in these affordable portions so you can mix and match. 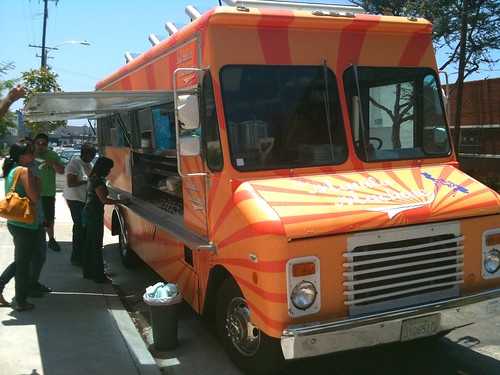 Fancy sliders, what with the use of pan de sal bread; “salt” rolls that may remind folks of sweet Hawaiian bread. This definitely isn’t my mama’s Filipino food. The meat of the chicken adobo and the beef were tender and, like the lumpia, weren’t as greasy as my mom’s; sorry, Mom.

And I’ve never had turon like this before. The original version calls for the banana lumpia to be rolled in brown sugar and fried. Here, it’s drizzled with caramel sauce. So decadent, sweet and sticky. Keep some Wet Naps handy.

If I had to complain about something, though, it would be that the food is not really packaged to-go and you need two hands and lots of napkins to eat them, especially that sticky turon. There is a nice shelf on the truck where I just set my containers but what to do if there are lots of people gathered around the order and pickup windows? Also it would be difficult to balance all those containers to take back to my desk should the Manila Machine park at food truck alley near my office in Santa Monica, ahem. Minor issues for sure, but just sayin’.

The menu changes regularly so check with the MM’s site to see what they’re serving up at the truck this week. Mm, spam sliders! I wonder when they’ll have lechon, specifically lechon kawali. The truck also has breakfast with dishes like a pan de sal French toast and spam with garlic fried rice and a fried egg and weekly specials should you be lucky enough to catch them during morning hours.

In any case, great job, Nastassia and Marvin! And thanks for spreading the gospel of Filipino food.