My 8 Favorite Cocktails From My New York Trip 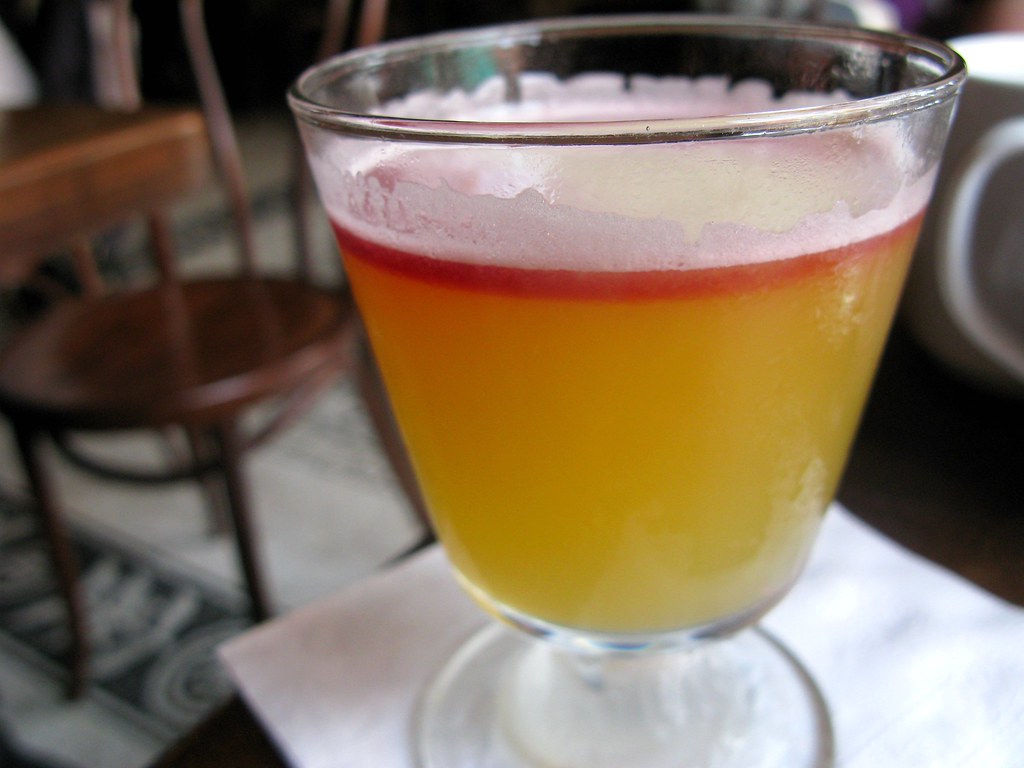 Being a huge fan of the cocktail I amassed a list of bars I wanted to visit during my long weekend in New York. Don’t get me wrong, we have great bars and ample master mixologists in L.A. but New York is where cocktails regained their popularity, especially the classic cocktail. Audrey Saunders (Pegu Club) and Sasha Petraske (Milk & Honey) are highly respected New York mixologists who had a hand in creating some of the best must-drink cocktail menus in Los Angeles; Audrey originally created the Tar Pit’s menu and Sasha is proprietor of The Varnish.

So I dragged my lovely and very accommodating NYC hosts — my sister and her husband — around the city, from Brooklyn to Long Island City to the Lower Eastside to Midtown East. Sadly we didn’t get to go to every bar on my list — I’d need several more days to accomplish that — but we tasted many delicious cocktails. Of those I had, these were my favorites listed from most fave to fave:

New York Sour at Clover Club: This is a beauty of a libation — rye, lemon, orange and a claret snap. I actually preferred it to my other fave at the Clover Club brunch, the Queens Park Swizzle. No ice or garnish to get in the way of simple enjoyment. A perfect balance of the sweet juices and the rye with that hint of the delicate claret. I didn’t stir the claret in but just enjoyed how it slips in with each sip.

Painkiller at Painkiller: The bartender/co-owner in Painkiller, Guiseppe Gonzalez, downplayed this cocktail saying that it’s basically a pina colada but with orange juice and nutmeg, but for me it was so much more. Who knew that those additional ingredients would be all it took to yummify that tropical classic? I was kinda bummed that it has to come with so much crushed ice — me want more liquid — as I sucked it down so fast. Definitely not a first drink of the night if you’re looking to get your buzz on immediately but maybe a nice nightcap if you want to end things on a light but tasty note.

Queens Park Swizzle at Clover Club: This Clover Club liquid brunch was one of the best brunches I’ve ever experienced in my life, which was good considering the arduous trek it took to get there: about an hour and a half subway ride and some walking. Oy. But this cocktail was part of an extensive brunch cocktail menu composed of swizzles, fizzes, cobblers, punches and more. And prices were so reasonable for such deliciousness. This particular swizzle is made of aged rum, mint, bitters and lime.

Strawberry Presbyterian Bartender’s Choice at Painkiller: OK, I’m a sucker for bourbon/ginger cocktails but Painkiller’s other co-owner Richard Boccato went one further with this by adding strawberries to the standard Presbyterian cocktail of whiskey and ginger ale. My sister ordered a bartender’s choice and this is what she got. Suffice it to say, I eyeballed her drink the entire time she drank it. “Mmm, that strawberry/candied ginger garnish was sooo good!” she said. Mean!

Rye Fancy-Free at Dutch Kills: Made with Rye Whiskey, maraschino liqueur, orange bitters, Angostura bitters, lemon juice, powdered sugar. The specialty cocktail menu at Sasha Petraske’s Long Island City bar was only 5 cocktails long and I couldn’t really find anything I liked on there so I asked the bartender to make me something more up my alley. Of the drinks our table ordered, this was a fave with this group of whiskey drinkers; a cross between a Manhattan and an Old Fashioned.

Sazerac at Beekman’s Bar and Books: This is another of my favorite classic cocktails so I’m picky with how bars handle the absinthe part of the prep. I’ve had it where they actually add a shot of “absinthe” to the mix. Blech. But here, they add the absinthe as a spray through a lighted match. Fyah! It adds a subtle smokiness that works, plus the pyromaniac in me enjoys the show.

Maker’s Mark 46: OK, this isn’t really a cocktail but as it’s Maker’s Mark’s newest product, coming out this summer (about $34 a bottle), and I was able to get a sneaky sip of it during a bourbon tasting seminar at the Big Apple BBQ Block Party, I have to include it. Plus, it was just soo good. Definitely need to get myself a bottle. Maker’s 46 is more complex, spicier and has a longer and sweeter finish than the original Maker’s.

Manhattan at Beekman’s Bar and Books: I’ve always wanted to have a Manhattan whilst in Manhattan and after the BBQ fest that’s just what I did. The bartender here, Jake, asked me if I wanted it “dry, sweet or perfect” and then “up or on the rocks.” And that’s when I knew my Manhattan was in good hands. I asked for perfect — half dry vermouth and half sweet — and it was perfect in every way, right down to the twist garnish.