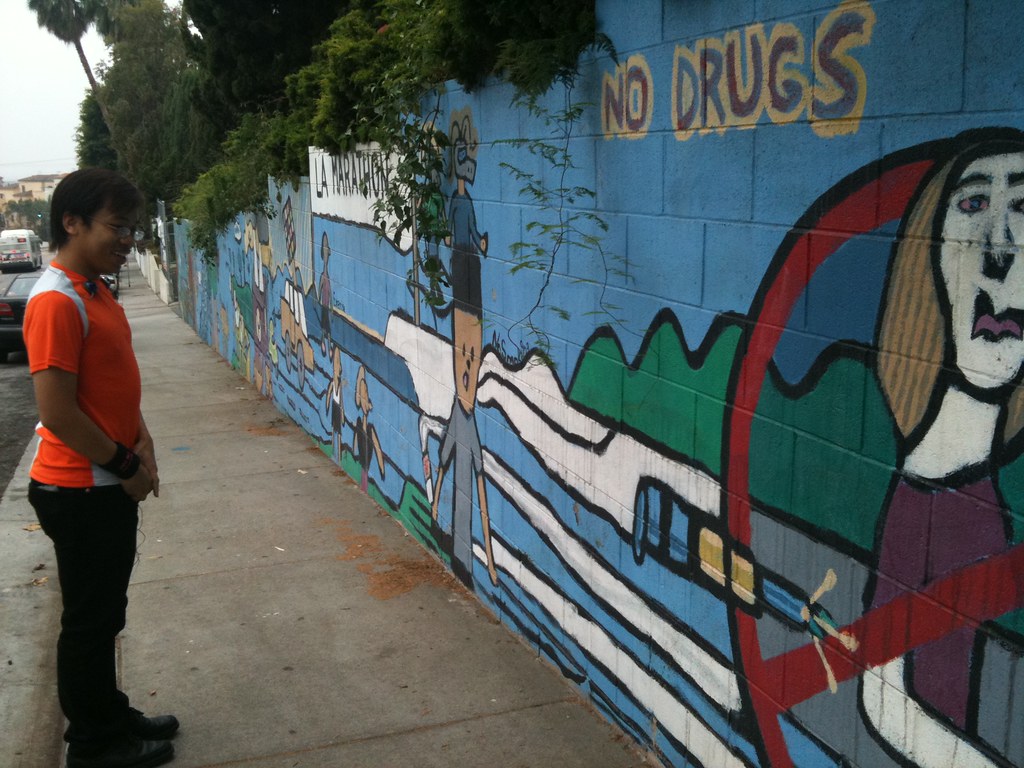 Living in L.A. we come to accept that all these cars and all that traffic are an intrinsic part of our culture. Hey, this is a sprawl so we spend a great deal of time in our automobiles to get to work and play. But while we do that we end up skipping over a lot of the cool parts of our city, cruising past hidden gems, motoring past historic landmarks and only acknowledging charming neighborhoods by glancing at their road signs as we drive by.

So when blogger buddy H.C. of LA/OC Foodventures told me about his monthly urban hikes that he started doing just this past February after being inspired by the Great Los Angeles Walk, I jumped at the chance to join him on his trek down Robertson Boulevard.

Armed with only a water bottle, a camera, oh, and our Twitter, we started off in West Hollywood and hoofed it all the way down to Culver City (here’s our Google map itinerary), photographing and Tweeting our adventure.

Our loose itinerary took us from Duke’s Coffee Shop on Sunset to the caviar counter at Petrossian to a littered stretch of nothing in Beverlywood to tea at Royal/T Cafe in Culver City. Along the way I finally got to see everything up close, including Sarah Jessica Parker’s photoshopped schnoz in a Sex and the City 2 bus stop ad, huge crushed roaches in the street (no pictures of that!) and the colorful details of a children’s “No Drugs” mural on San Vicente. It was all so disturbing and wonderful.

The start of our trip was basically a pub crawl in the a.m. as we had drinks at the Abbey, Cecconi’s and Petrossian and sobered up during the wasteland portion of the boulevard, south of Pico. In total our journey took us about six hours and six miles.

But here are some of the revelations I picked up on our intimate journey down Robertson.

To celebrate the end of our urban hike, H.C. and I had a tasty lunch and several beers at Father’s Office,  and then walked further to Royal/T Cafe, where we had left H.C.’s car, to enjoy a green matcha tea (him) and iced vanilla rooibos (me).

At the end of this long morning, I felt tired but fulfilled and on a more familiar level with our city. I’d definitely like to do this again, however, H.C.’s next great adventure will be a long one in the O.C. taking him from La Habra to the Huntington Beach Pier. I might just meet up at the end when he goes to Don the Beachcomber for the tiki cocktail food pairing. Who’s in?