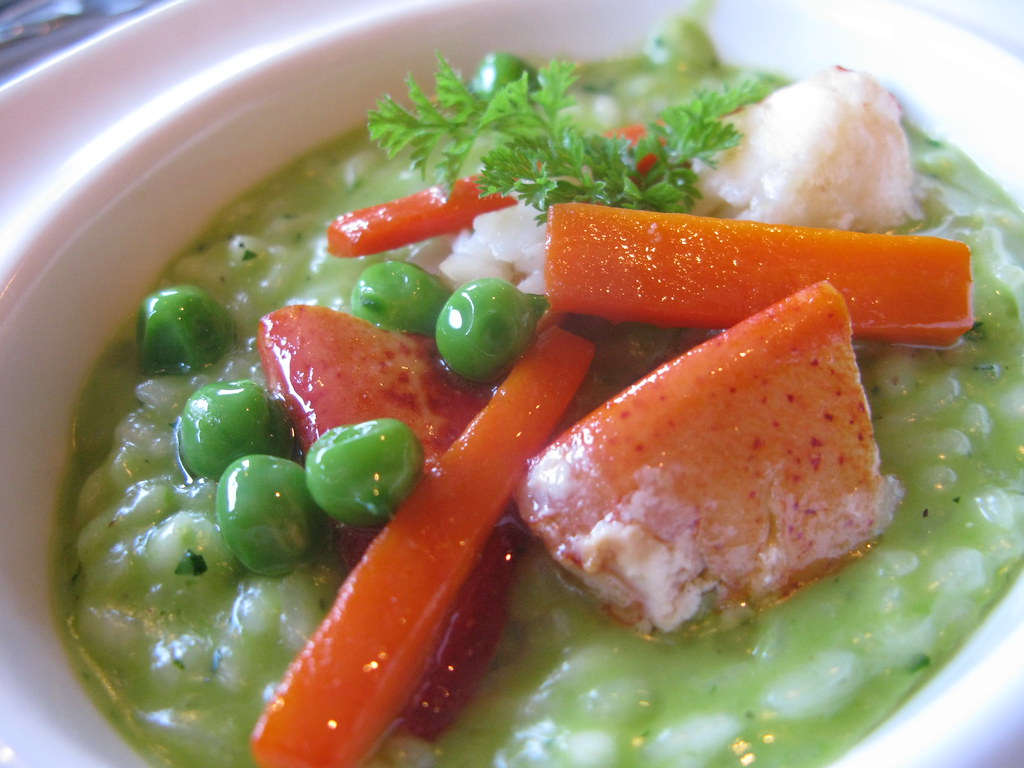 I was so excited when I heard that gastropub Waterloo & City just opened up in my old crappy hood, down the street from my old favorite BBQ joint/car wash at Outdoor Grill. It’s only been in business for four days and yet has already received a ton of attention. Maybe this stretch of Washington Boulevard, a wasteland of tackle stores, liquor stores and hardware stores, is heading in the right foodie-friendly direction. They already have Alibi Room with Kogi BBQ and Pit Fire Pizza and now this gorgeous gastropub that has taken over the tired-looking Crest House, which closed back in 2006. 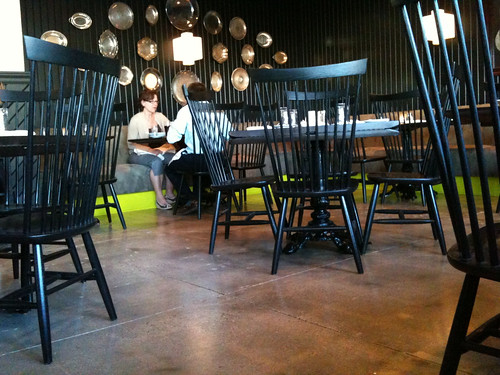 The new venue was designed by local designers Thoreen&Ritter and offers a variety of seating like the 30-foot-long copper top bar, the large communal table and ample banquettes with high-backed wooden chairs. Touches of antique mirrors and silver platters along with the recycled church pews provide a nod to British pubness while still classing up the joint.

Now, usually I prefer to check out a place without the help of the publicist or the special attentions of the venue and had come here with that intention. But just when we were about to get our food, the publicist, who apparently was having dinner here, too, spotted me. “Caroline, you just snuck in here,” she said smiling, and then went on to introduce me to Carolos Tomazos, formerly of New York’s Per Se and Le Bernardin and now general manager and co-owner of the restaurant with chef Brendan Collins (Anisette, Palihouse). D’oh!

I needn’t have worried as up to this point, we received very friendly and attentive service and the food, which came out of the kitchen quickly, was delicious. Sure, later they ended up comping my portion of the meal and brought over an extra cocktail that I hadn’t asked for, but even before that it was still a really impressive start for a restaurant that had just opened. The only bit that appeared to need fine-tuning was the specialty cocktails which they had just started serving yesterday. 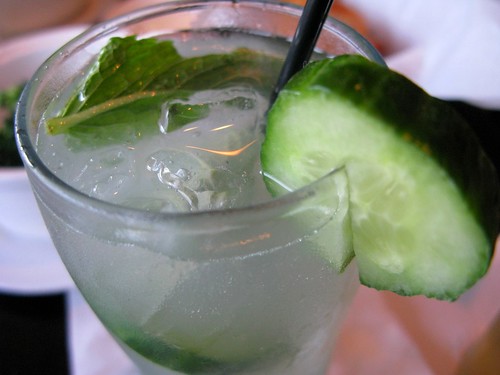 The cocktail menu here offers versions of classics like the Julep with Maker’s, agave nectar and mint and the Oh Rickey! with Ketel One, blackberries, lime and soda. And there are also nods to Great Britain via the Pimm’s Cup and the Piccadilly Martini.

I resisted the Maker’s julep and went for the Dark & Stormy with Mount Gay rum, ginger beer and candied ginger. It arrived at my table sans the candied ginger. And upon tasting it, seemed like they forgot the rum, too. Only the ginger beer came through. A lot.

I was reluctant at first to tell our server Kurt about this since the last time I asked someone to fix my cocktail at Capitol City with a touch more booze they simply added another shot and effectively ruined the balance of it. Thank goodness that wasn’t the case here. Kurt came back with a better version. “All they did was add a little bit more rum,” he said. Perfect. This way the ginger was balanced out and sweetened, plus you could still taste the booze on the finish. Still didn’t get a candied ginger garnish but oh well.

Carolos also had brought me the Mr. Collins cocktail which is made with Beefeater 24 gin, lots of cucumbers, mint and tonic. Loved the brightness of the soda and the refreshing lightness of the cucumbers and mint. On a warmer day, I’d enjoy this on the patio in front of the restaurant. I couldn’t really taste the gin in this but between this and the Dark & Stormy I was starting to feel a little fuzzy, so I know it was in there. 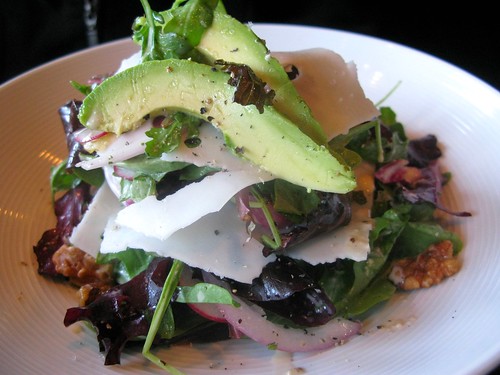 For beer drinkers, you’ll be happy to know that they have 10 craft beers on tap as well as a selection of 20+ bottled beers. My bf ordered the Duvel Green on tap and ended up disappointed. “It tastes like an American beer, like Coors,” he said. Carolos confirmed that this beer is best as a straight thirst quencher to be chased by a bottle of Duvel.

The food menu features a selection of salads, pizzas and pastas all made with farmer’s market ingredients as well as terrines and pates. Apparently Chef Collins designed the menu around things he likes to eat. And yes, it will also include British faves like sweetbreads and kidney. Things I don’t like to eat. Heh.

Everything was a bit pricier than I usually like for casual dining. Starters consist of $12 Manchester quail, $10 pint of shrimp and $12 Maine scallops. Salads are about $9-$11, pizzas $12-$14 and pastas were available in half or full portions. Main dishes range from the Piedmontese beef burger ($16) to the Piedmontese flat iron ($25). Or you can order the dishes built for two like the His and Hers T-Bone ($64) or the whole roasted chicken ($44).

I went for the half portion of the lobster risotto ($14) with peas and carrots and also ordered a side of the broccoli with garlic and chili ($4). I was a little bummed about how small my portion was for $14 but then again this did have lobster in it. The risotto was a bit al dente but I really enjoyed the creaminess of the dish. And everything tasted so fresh. 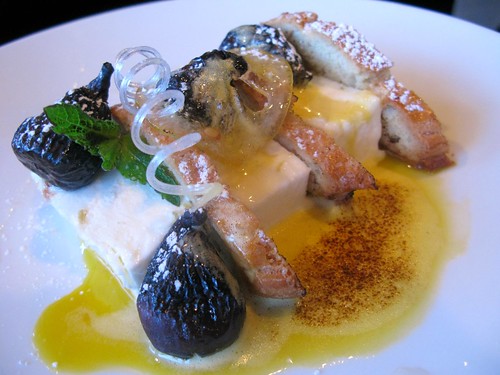 My bf had the roasted beet salad with St. Maure, avocado and sherry emulsion ($9). He was pleased by its perfect balance of everything; not too much dressing and a good variety of greens and beets. Plus the walnuts provided a nice crunchy texture. The salad wasn’t a huge portion but definitely still satisfying, especially when paired with the delicious side of broccoli which he ordered, too.

For dessert we split an order of the lemon ricotta semi-freddo with roasted figs and amaretto sabayon ($9). SO delicious! It wasn’t too sweet and the perfect way to end the meal. We loved the variety of textures from the creamy lemon ricotta to the crunchy cookies. Bf appreciated its subtle flavor and how it wasn’t rich or heavy as he had expected it to be. I liked that it didn’t make me feel gross afterward. For chocolate lovers, they do have hot chocolate pudding with dulce de leche and caramelized bananas, which sound too sweet even for the likes of me.

I’d definitely like to come back to check out Waterloo & City once it’s been around for several months, even though it seems to have already gotten the hang of things. And for it only being its third night in existence the place was hopping. They say reservations are recommended but when we rolled in before 7pm, we were able to get seated right away. Oh, bonus? They have a parking lot and ample street parking. Gotta love that.