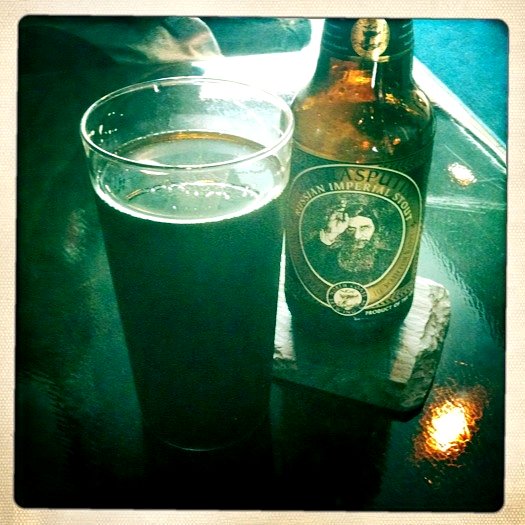 I’ve been dying to try Lamill‘s unique coffee beer drink, the Black & Black ($9), since I first heard mention of it on LAist back in February when the boutique coffee shop first got its liquor license. But I have only just now had the chance to make my way over to its Silver Lake location. This inspired mixture of Old Rasputin Imperial Russian Stout and iced organic Lamill house coffee is a perfect balance of flavors. The richness of the coffee enhances that of the stout making it taste as deep and dark as an espresso but refreshing at the same time. Really hit the spot on a warm day after a hike.

What’s funny is that this isn’t the first time I’ve been exposed to such a concoction. I first experienced something similar when a friend had added a shot of espresso to his pint of Guinness for a brunch cocktail. I thought it was genius back then and this refined and measured variety is even better.

The Black & Black is a bit more sophisticated than my friend’s impromptu cocktail. Here, the coffee is iced but not poured over ice which would dilute the intense flavors. The server also shows up at the table with the glass already half filled with coffee and then pours the stout in as if measuring it. There is still some stout left over to be enjoyed later but regardless I still got a buzz, the intoxicated kind, from just half that serving of Rasputin. Strong stuff! It is 9% alcohol after all.

What it is: their darkest coffee, the Black Onyx blend, mixed with an Old Rasputin ale, an equally dark, rich brew.

In any case, you could probably try to make this concoction at home. Just buy some organic coffee and Old Rasputin Stout. Brew the coffee and then refrigerate it; don’t add ice. When the coffee is chilled, fill a glass with half coffee and then fill it the rest of the way with the stout. Easy-peasy!

However you do it, just do it. If you’re a fan of strong coffee flavors and rich, dark beer, this drink is up your alley.