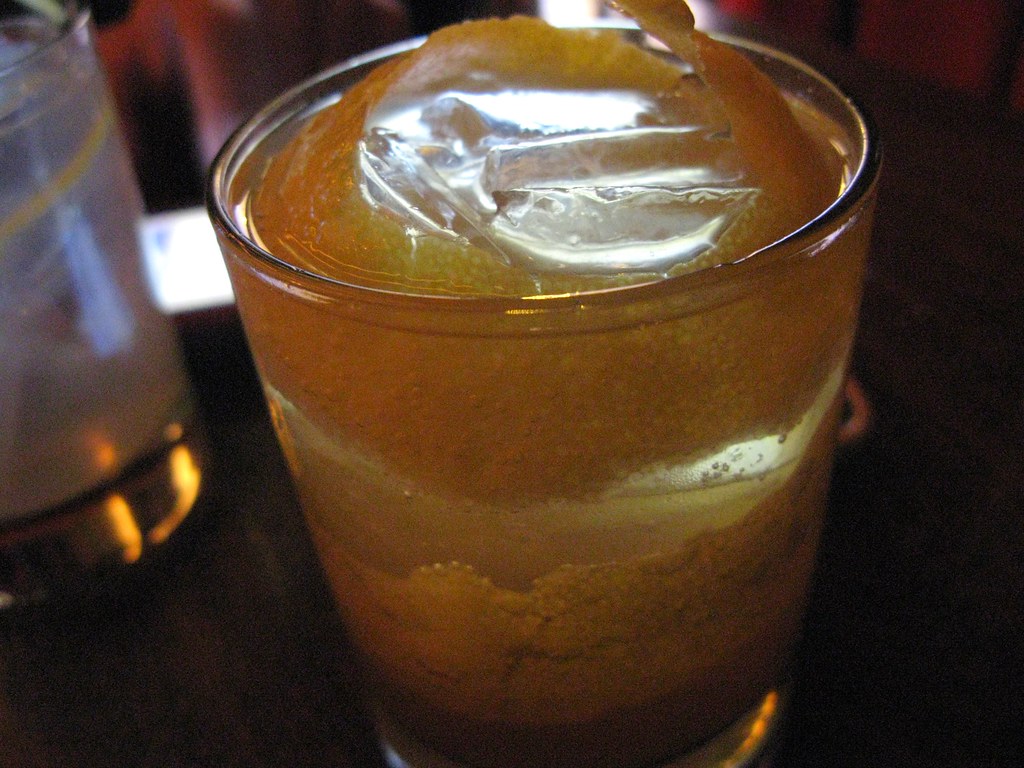 OMG, so happy that I found the Shady Lady Saloon in Sacramento. Ya see, my folks still live in Sacto so I have to visit on occasion but have resigned myself to breweries and dive bars for tippling. Not that there’s anything wrong with that; I just have to go without a good Manhattan during my visits is all. But just this past weekend, when I was hanging out with an ol’ high school chum at East Sacramento’s Club Raven, a really cool dive bar by the way, and lamented about the dearth of handcrafted cocktails in our capital, she mentioned the Shady Lady. 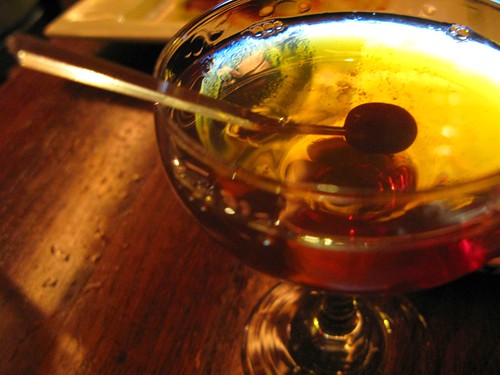 This speakeasy bar has only been opened for about a year and handcrafted cocktailing is its theme, making it the only one of its kind in Sacto. Sure, there’s Lounge ON20 and the L Wine Lounge but they don’t do the “forgotten” classics.

No, the Shady Lady boasts pages and pages of classic cocktails — Blood & Sand, French 75, Hemingway Daiquiri, Brandy Crusta, Zombie, the Last Word and SL fave, the Gin Daisy, to name but a few. Each spirit gets two pages dedicated to it, one side listing the different brands and the other the specialty cocktails which are only $8 each!

I was tempted to go with my beloved Mmmanhattan but figured I should order something different instead for starters. Hmm, never had a Horse’s Neck before, a popular Shady Lady cocktail. Bulleit Bourbon, housemade ginger syrup, bitters, topped with soda water and garnished with an entire lemon peel. The cocktail gets its name from the extra long lemon peel that is hung over the rim of the glass like  a horse’s neck.

This was up my alley. And a

perfect way to kick off the evening as it was so light and a touch sweet with a hint of that gingery bite. I later had this as a mocktail, which just made it a fancy and tastier ginger ale.

“The last thing Sacramento needs is another ultra lounge,” [owner Jason] Boggs said. “This isn’t going to be a place to get your Tokyo Tea and your Black Superman or your Adios. Instead, the new bar will focus on tried and true cocktails that for some reason have fallen out of favor.”

However, for my next cocktail, I couldn’t say no to the Manhattan any longer. Here, they serve this Rittenhouse Rye concoction in a small vintage portion and garnish it with a brandied cherry. No maraschino here? This place is for serious. And oh my the Manhattan was purrrfect, down to the bite from the rye and bitters. Spot-on balance with the Sweet Vermouth.

I sighed and tapped my foot to the Billie Holiday song that filled the air (hat tip to my Uncle Mel) and sipped while enjoying the buzzing atmosphere in the bar. Hipsters abound. This was a speakeasy theme but none like I’ve seen before. No guys in ties and slacks here, no girls in fashionable designer frocks. Rather, it was very casual with the jeans, tank tops and gasp! even sneakers. There were a few people dressed up for a night on the town. And on some nights, later on in the evening, I hear that some patrons even dress in period costumes befitting of a 1920s speakeasy. Hmm, next time I’ll just have to break out the pin curls. 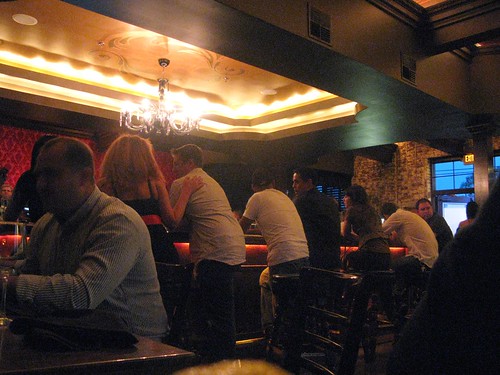 The bar’s interior, which actually used to be an old Wonderbread factory, consisted of flocked red velvet walls, some brick, a U-shaped bar and a tin ceiling. Vintage photos adorned the walls and a gorgeous chandelier hung over the bar. In a corner was a small stage where a jazz band later performed; to the right of that, a photobooth.

Although I found the cocktails I was looking for here, the food left me wondering if I should grab dinner elsewhere. Not that it was bad, it’s just…Southern, meaning not for those opposed to the fried persuasion. The menu does have salads and sandwiches as well as small and large plates, but I honestly couldn’t find something that appealed to me and would agree with my healthier eating lifestyle. So we just went with a couple of small plates — mushroom toasts and the ham and cheese hush puppies. I managed to put away the toasts, even getting through that fat slice of cheese, but there was no finishing the hush puppies which just tasted more fried than anything else. The menu listed it as ham and cheese but I could barely taste either of those flavors. The spicy chile sauce and chive mayo they came with helped a bit but we just couldn’t polish off the plate. I just wasn’t crazy about either dishes.

However, if you do like soul food you’ll be thrilled to know that here they have Shrimp Po’ Boys, veggie muffuletta sandwich, pigs in a blanket, mussels and beer, and even Jambalaya. And prices are decent, ranging from $5 tomato soup and grilled cheese points to $15 for a half-dozen of Kumamoto oysters.

I think I’ll just stick to the cocktails here. Anyhoo, because of the Lady, now I can’t wait to revisit Sacramento. Finally! A cocktail enthusiast can go home again.